Station Hill
Bury, in the west of the county of Suffolk, is the ancient judicial and administrative centre. The centre of the town has not experienced quite the radical surgery evident in Ipswich. Several lettering examples survive.
Just off Station Hill is an old seed mill, still bearing a somewhat battered and hard-to-read company sign on the red brick. 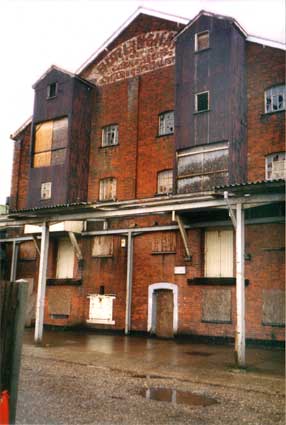 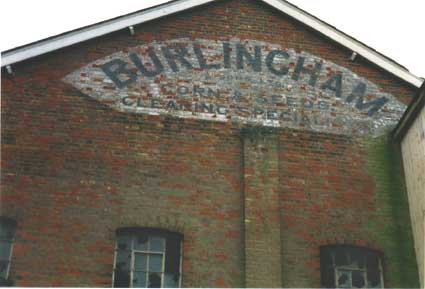 2004 images
And around the other side of the building, adjacent to the rail station by a very busy (and noisy) stonework depot, a better preserved version of the lettering: 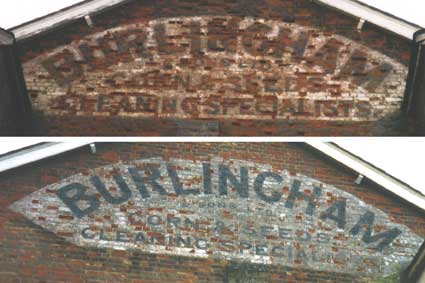 George Burlingham & Sons Ltd are still, in a different guise, trading in seeds from Ingham, Bury. George Burlingham (as well as other family members) is mentioned in relation to several windmills in Norfolk around the mid-19th century.

A hundred yards from the rail station towards the town centre (and Bury is similar to many towns in the station being on the outskirts) is an attractive little confectionery and floristry shop on the corner of Etna Road. You can see the rather care-worn municipal steel street sign (with its corners nipped to form a cartouche) on the corner of the wall. Why then did the builder set an unusual stone block sign into the fabric of the wall with 'AETNA on one side and 'COTTAGE' on the other? Is there something he knew that we don't? Perhaps the use of the dipthong at the start of the name of that most famous erupting volcano in Sicily was statutory at the date of building.

Etna Road
According to Adrian Room’s book Place-names of the World', the name Etna is said to have originated from a Phoenician word attuna meaning "furnace." He dismisses the theory that Etna is from Greek αἴθω = "I burn". In Classical Greek, it is called Αἴτνη (Aítnē) and Aetna in Latin. It is also known as Muncibeddu in Sicilian and Mongibello in Italian (from the Latin mons and the Arabic gibel, both meaning mountain). Its Arabic name was Ǧabal al-Nār ("the Mountain of Fire"). In modern history, Etna's most destructive eruption was in 1669. 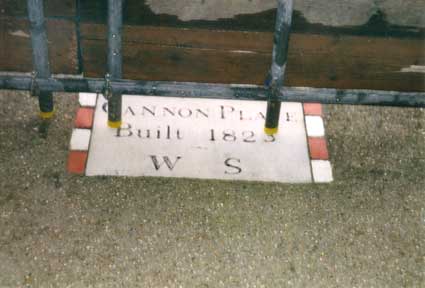 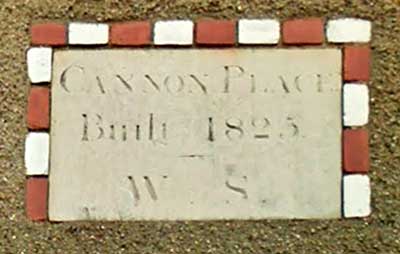 This plaque, nearly obscured by scaffold boards, shows that this is quite an old building. This end has recently been used as a restaurant and is opposite an old brewery in Cannon Street which is now a bar and restaurant. The main interest lies in the advertising panel for :

which dominates what once must have been a corner grocery shop. It compares with an advertisement for the same product in Ipswich. Similarly, someone's tried to obliterate it with an inappropriately coloured paint (fortunately unsuccesfully). There is a plaque similar to the one shown above, just around the corner in Church Street, indicating that the whole building dates to 1823. 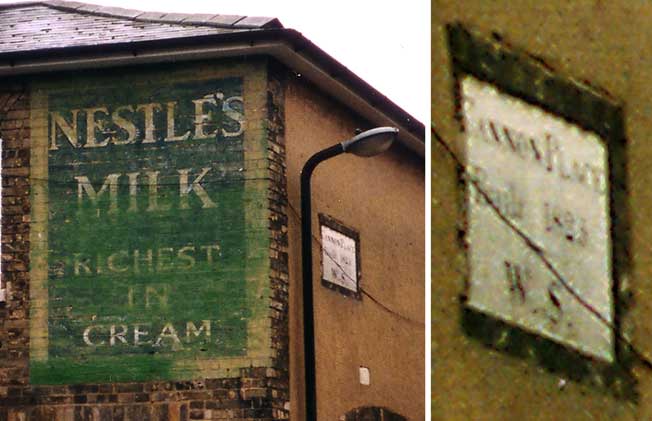 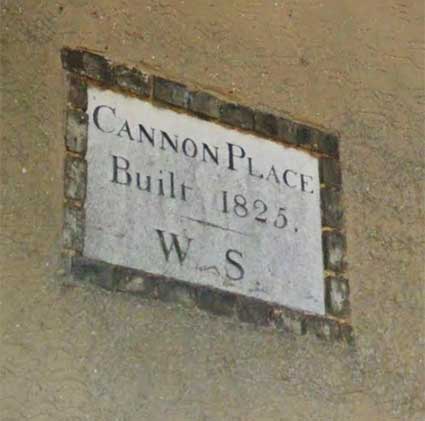 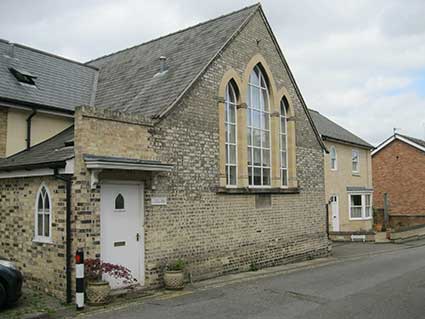 Walking up Church Row, a former chapel-like building is seen on the right, now two residences, with lettering on the lintel tucked under a more recent porch: 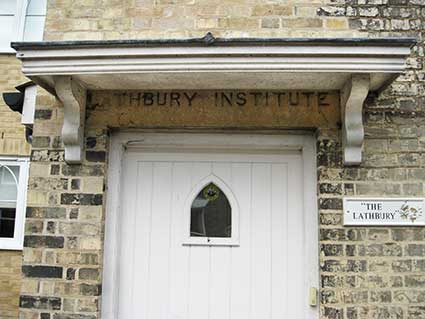 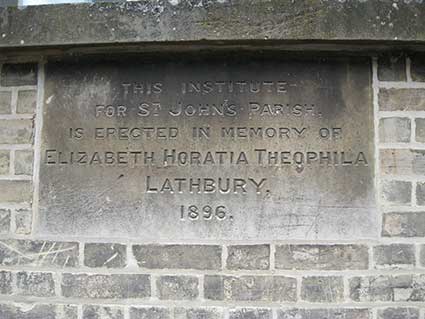 2017 images
The tablet below the triple gothic window tells us more:

'THIS INSTITUTE
FOR ST. JOHN'S PARISH,
IS ERECTED IN MEMORY OF
ELIZABETH HORATIA THEOPHILA LATHBURY.
1896.' 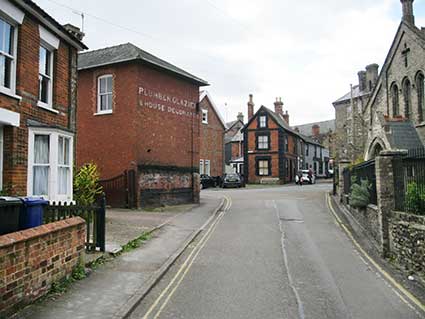 Further along Church Row is a trade sign painted in white letters on the redbrick end wall of 9-11 Orchard Street (a former shop: 'SILVER SALON TEL. 763737', once covered by a modern signboard): 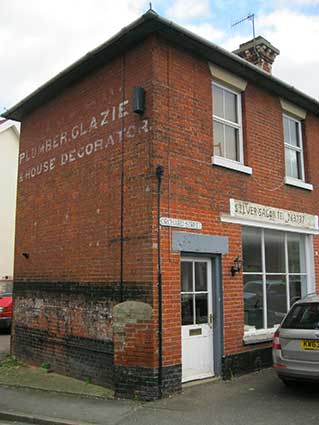 Passing the rear of St Johns Church on the right, you find a triangular building facing onto St Johns Street bearing the carved name plaque:

Kings Road
In Kings Road, near to the corner of Prospect Row, lies the former premises of:
'HANCHET. MONUMENTAL STONE & MARBLE WORKS.' carved deep into the sandstone facing, just under the eves, then stained to stand out 'til today. See the detail below.

On the other side of Prospect Row, fronting King Street, lies Salient Place. On the end wall of this terrace of cottages is a sign rebaited into the brickwork. The attempts to obliterate the lettering have been largely successful, but 'WRIGHT' seems to be readable.

Cornhill
On Corhill in the centre of town are several interesting pieces of public lettering. Bury St Edmunds still has a real Post Office, unlike Ipswich, and to prove it are some fine cast iron characters painted white against the red brick: 'V.R .  POST .  OFFICE . V.R' (with centralised stops). This attractive font bears comparison to the cast iron characters of 'V.A. Marriott' in Ipswich. 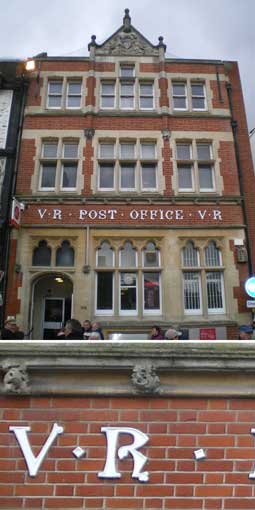 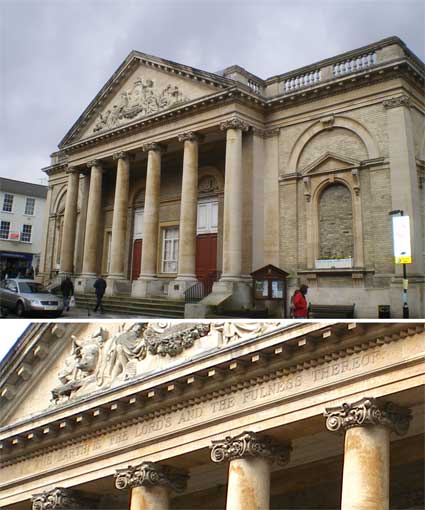 Down the centre of the lower end of Corn Hill are three fine stone building including the Corn Exchange itself at the end. This bears the  legend:

'THE EARTH IS THE LORD'S AND THE FULNESS THEREOF.'

And in the centre above it, in a cartouche between gods of plenty and symbols of harvest (see the beehive to the left), the profile of Victoria topped by a crown and withe the motto: 'GOD SAVE THE QUEEN' in relief condensed capitals below. 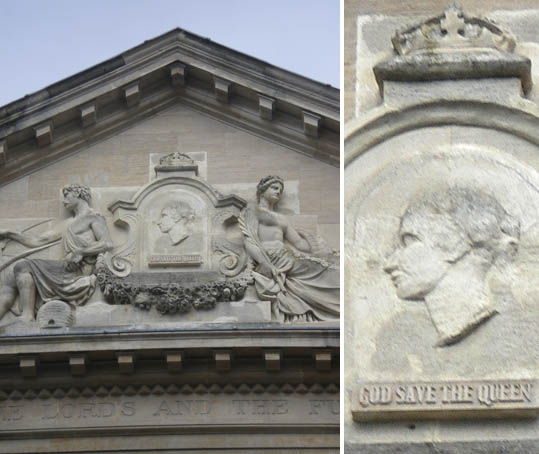 Then there's the former 'FIRE STATION.' prominently signed above the door in chiselled characters. The building is now commerical premises. 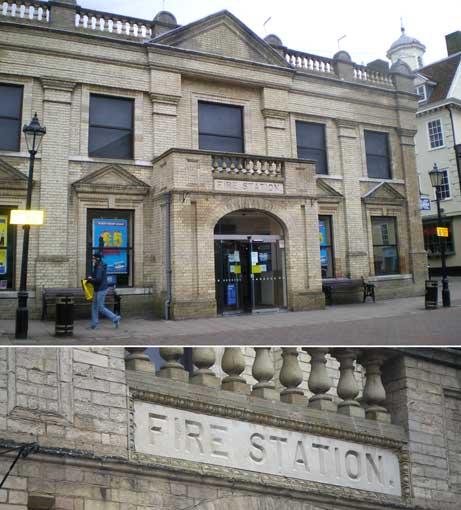 At the top of Corn Hill is the oldest building in Bury: 'MOYSE'S HALL' in curved chiselled capitals stained with black paint. For almost a thousand years Moyse's Hall has looked out over the market place of Bury St Edmunds. It has seen many changes since it was built in 1180 (the narrower building to the left in our photograph below; the entrance leads to a Tudor extension to the original house) and has had a variety of different uses, including a tavern and a 'gaol'. It is a rare and important example of Norman domestic architecture. To the left of Moyse's Hall is now a shop which was converted from an inn called The Castle. The left-hand part of Moyse's Hall formed part of this inn for many years. Currently it's a museum which provides an excellent setting in which to trace the unfolding story of West Suffolk, through displays which range from prehistoric times right through to the present. Moyse's Hall's own story is as rich and varied as the collections which it houses. Sadly, the view when we visited in a wet February 2010 was marred by plastic barriers, tape and cones. 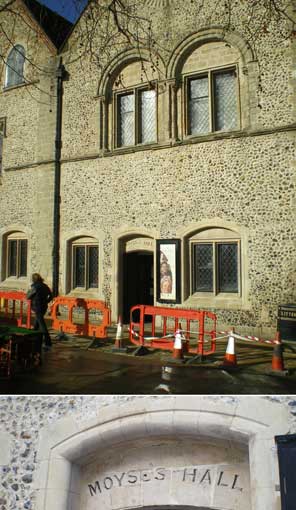 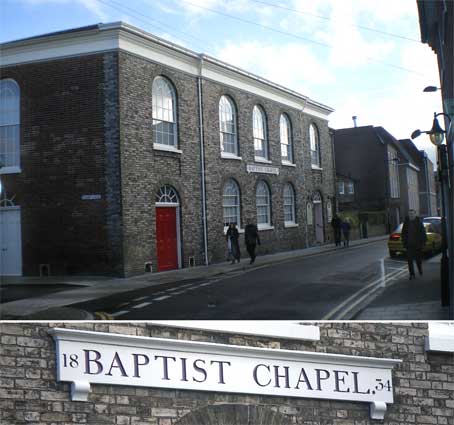 Pump Lane
The 'BAPTIST CHAPEL.' on the corner of Pump Lane is prominently named on an attractive and well preserved stone panel with bevelled top and curved supports. The date '18 ... 34' surrounds the name. Directly opposite is small ecclesiatical-looking building which bears the tablet shown:

'THIS MEMORIAL STONE
WAS LAID ON
SEPTEMBER 8TH 1892, BY
JAMES STIFF,
(OF LAMBETH LONDON)
WHO ENTERED THIS SUNDAY SCHOOL
AS A SCHOLAR AT ITS FORMATION
IN 1824.
----
J.E. SEARS F.R.I.BA.
ARCHITECT. 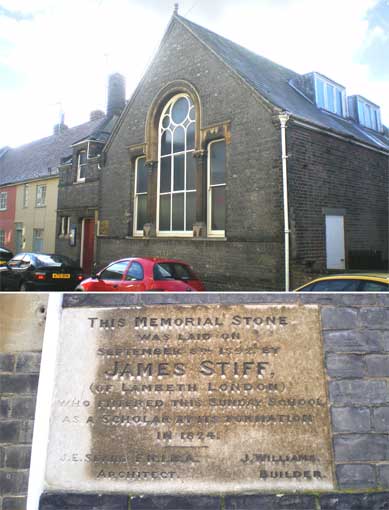 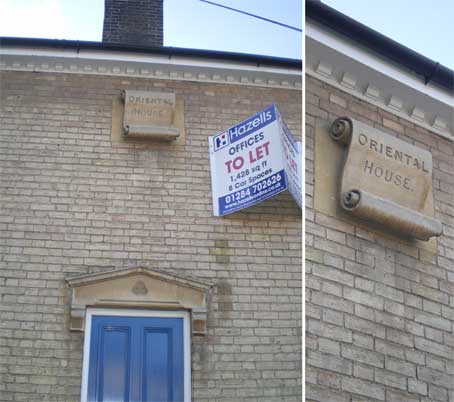 And in St Andrews Street North - not far from the bus station and library - we find the 'ORIENTAL HOUSE.' (up for sale when we saw it). Quite why this modest house built in Suffolk whites bears such a grand, deep, stone scroll sign, we don't know. 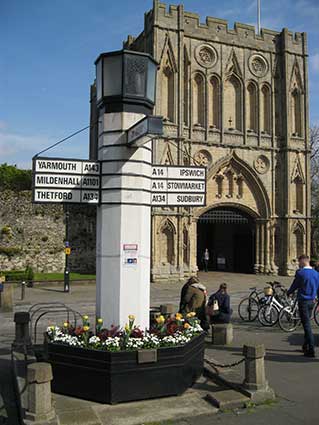 With the Abbey Gate in the background, Angel Hill boasts this curious example of street furniture: half-lighthouse, half-signpost, with a bit of planter thrown in. The arm pointing towards the camera indicates Abbeygate Street and is labelled in red 'NO ENTRY'. The octagonal post is stencilled 'F418', 'F419', 'F420' and 'F421' on the cardinal points. 'F418' points towards the ancient gateway, as does a spotlight inside the lantern. The glazed road signs, which are supported by metal trusses, read:

Home
Return to Historic Lettering from outside Ipswich
Please email any comments and contributions by clicking here.