Sherman's Hall (originally known as The English or Writing School) is a very old private school building which stands opposite the church. The tastefully decorative fascade features a fine sundial (see Aldeburgh and Woodbridge for more of these) replete with gold painted Roman numerals and a niche below containing a lettered plinth and stone vase (not, however, as old as they look...). 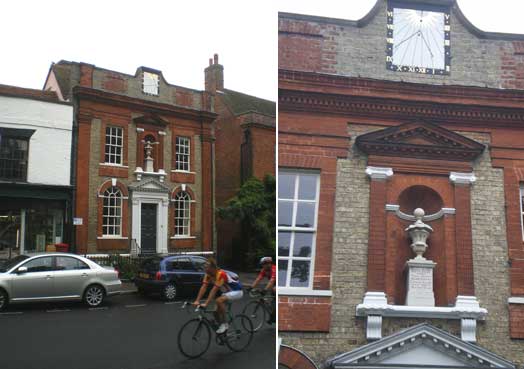 'This temple (or 'These rooms') 1735 were erected by Thomas Sherman + 1978 Hereditary Legal Guardian Marshall Sisson, Architect'. 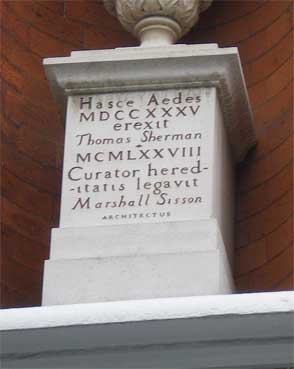 It is only when one draws near to the railings around the front of the building that the brickwork - or the way in which it has been defaced by past pupils - is noticed. These extraordinary grafitti, some over 200 years old, are quite readable on the whole and would repay some detailed study and research to trace some of the people who created them. Some of the lettering in copperplate script is a testimony to the superior education provided by the Writing School. But did the Headmaster encourage this apparent vandalism, continued over many years until it became a tradition? Intriguing.

'G. TAYLOR
APIL 13 1777' (below, inside the scratched oval)
(Presumably once you start to scratch away at the redbrick, if you don't notice that you've left the 'r' out of 'April', it's too late! Admirable use of serifs by this boy.)

(Enhanced image)
[UPDATE 22.2.2016: "Very interesting article thank you. I have been researching my seventh Great Grandfather, William Colchester, the schoolmaster for many years at Sherman's Hall,  and wonder if the lettering you mention 'S WC 1767' is Susanna and William Colchester. Would you know if this is the case? I am happy for you to include my text on your page and have also included a photo [see below] of some of the ‘graffiti’ from the brickwork of the old Grammar School in Dedham which, as you can see, bears the name ‘W Colchester’. This would be Susanna and William’s son, also William, who was educated at the Grammar School along with Cyprian, my sixth Great Grandfather. Interestingly, William (the younger) did very well and went on to study maths at St John’s College, Cambridge, graduating in 1764 and eventually becoming the Vicar at Holton St Peter, Suffolk. The ‘graffiti’ if that is what it is, looks so expertly carved, I can’t imagine a schoolboy being able to do this and wonder if there was some other reason his name would have been marked on the outside, maybe an olden times achievement board? It is also very high up and would have had to be done with the aid of a rather tall ladder! Lesley Jones." Many thanks to Lesley for the image and related information about her ancestors.] 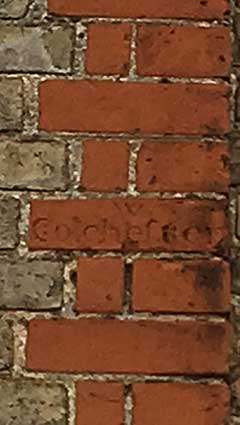 We can do no better than to quote from the website of The Dedham Vale Society (see Links for the full, informative article):

"Dedham High Street is a spectacular piece of architectural stage scenery. Few of the frontages that present themselves to the street are anything like as old as the structures that lurk behind; most of them received a dramatic facelift in times of Georgian prosperity, in order to ‘modernise’ the essentially medieval fabric of the village. There is no more striking example of this tendency than a house right at the heart of the village, opposite the parish church. This is the house variously known as Sherman’s Hall, Sherman’s House or just plain Sherman’s.

It is worth saying a little about the Sherman family, who built the house and who have had a remarkable influence well beyond Dedham, in the New World. The first known Sherman to settle in Dedham was Henry S. Sherman, who arrived in 1532 and established a successful cloth business. This was one of many such businesses established on the back of the wool trade, which had made this one of the wealthiest parts of the country. His sons Edmund and Henry were amongst the first governors of the Grammar School in Dedham, which was founded in 1571, and Edmund also founded the English or Writing School at Sherman’s. ...

In the 1870s a Commission was set up to look into the running of the Dedham schools. It recommended that a new elementary school should be built, and that the remit of the Grammar School should be expanded to meet the educational requirements of the middle class, as well as offering an education to poorer children showing academic promise. And so in 1873 the English School at Sherman’s closed. However, a tangible reminder of the long years of school use can still be seen in the many initials carved by Georgian and Victorian schoolboys in the soft red brickwork of the façade.

The elaborate brick frontage that we see today is the result of extensive alterations carried out in 1730-31. The ‘principal undertaker’ for this work was Mr Nicholas Freeman, who also oversaw the rebuilding of the Grammar School in the same year. The total cost of the remodelling of Sherman’s was £533 2s and fourpence half-penny. While this sum included provision for internal remodelling, this was relatively modest in character; the chief display was reserved for the facade, as if wishing to outdo the Grammar School.

This front façade is one of the great showpieces of the village and the county. It is a narrow, busy frontage which manages to accommodate all three of the principal classical Orders as well as a host of other architectural details. The façade is framed by a giant order of Doric pilasters surmounted by a dentil cornice, all in beautifully cut and jointed soft red brick. There is a fine timber door case with Corinthian pilasters and pediment. Above this there is an arched niche, also pedimented, and framed by Ionic pilasters, all in the same red brick. The niche now contains an urn, designed by Quinlan Terry and added in 1980. Crowning the elevation is a high parapet, swept up to accommodate a large sundial. There are four large sash windows, with typical early Georgian thick-section ovolo moulded glazing bars, and red brick surrounds and aprons.

The urn in the niche commemorates the Sherman family and the fact that Marshall Sisson, architect, gave the house to the National Trust in 1979. Sisson had moved to the village in 1934; like Raymond Erith he was (after early experiments with modernism) most at home working in the classical idiom. Also like Erith (and Sir Alfred Munnings), he was an original committee member of the Dedham Vale Society, which had been formed in 1937. Mrs Sisson, herself an accomplished artist and musician, was Secretary to the committee."
Andrew Derrick, February 2005, Dedham Vale Society

[UPDATE 2.6.2016: 'I read with interest your page about Dedham Grammar School. I was in Dedham at the weekend looking at the graffiti on the walls. My four times Great Grandfather, John Tayler, attended the Writing School run by William Colchester. I had hoped to find his name on the brickwork but sadly couldn’t! I know he was there though, as we have a couple of sheets of copperplate writing he did with the school’s name on and signed by him. They are dated 29 November 1760 and 24 April 1761. [They appear on the web page linked below.] Lesley Jones may be interested, too [see update 22.2.2016 above].
I don’t think he was related to Grimwood Tayler, who you mention. John always spelled Tayler with an ‘e’ and in my family history research I haven’t found a link. Anyway I have a page about him (with a picture) on my website here.
Many thanks. Rob Webb' Many thanks to Rob for getting in touch and for adding to the story of this fascinating institution.]

Round the corner from the school house in a tiny lane is a dated roundel (once again, suspiciously modern-looking and well maintained) reading: 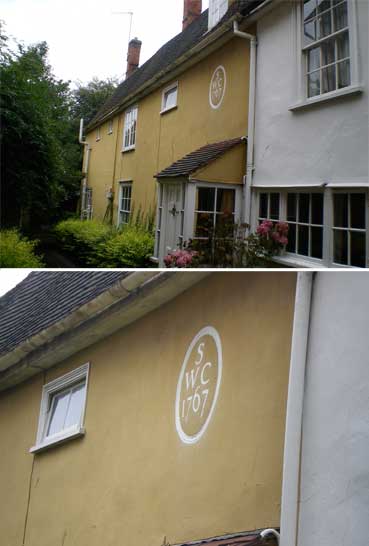 See the update from Lesley Jones above for a possible solution to the intials: her ancestors 'Susanna and William Colchester'.
Walking down the High Street towards the Dedham Arts and Crafts Centre is Well House (named on the front door) with a stone plaque high above the porch:

This translates as 'Thomas Grimwood: Master of this School 1732' (assuming 'Hujus' is 'Huius' meaning 'of this').

This small stone plaque has the genuine air of antiquity about it. There is a town pump nearby.  Here the stream passes in front of the buildings and gardens so that access to them is via small bridges. Over the road from Well House is Brook House marking the place where the water passes under the High Street and past the rear gardens eventually to flow into the River Stour.

In School Lane, to the west of High Street. 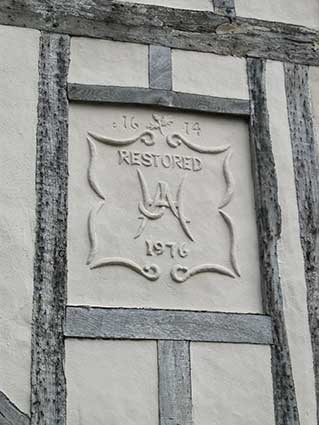 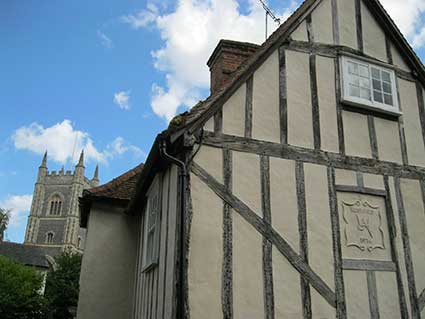 The nearness of Dedham Church is shown by the image above... 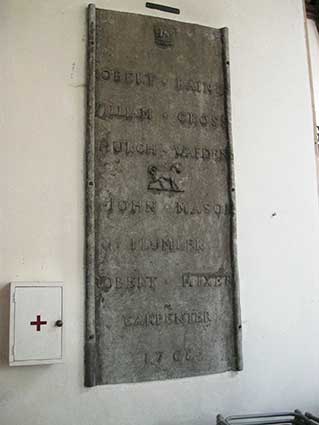 As with most churches there are many inscriptions of which these are but two. 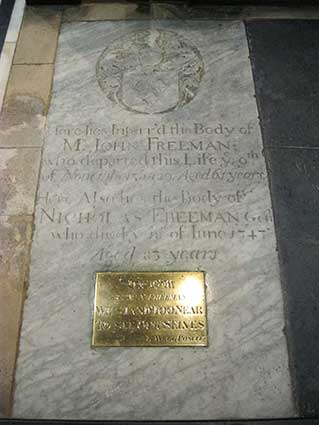 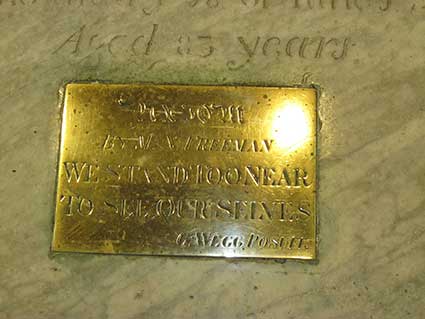 
Home
Return to Historic Lettering from outside Ipswich

Please email any comments and contributions by clicking here.