See the photographs of the Saxmundham to Aldeburgh branch line stations.

Leiston is a unique town among the wide variety of villages and settlements in Suffolk. In early history, Leiston was known only for its proximity to the river Mismer and important ports at Syzewell and Minsmere Havens (and therefore lucrative wrecking and smuggling activity) and the presence of nearby Leiston Abbey which would have dominated the local economy until the dissolution of the monasteries under Henry VIII. By fluke of history, the business of one bladesmith, Richard Garrett (born 12.10.1757), grew steadily from 1778 to metamorphose into an important Victorian engineering factory. Famous for its threshing machines, traction engines and many other products, Garretts engineering works transformed Leiston from a village of a few hundred inhabitants into an industrial town. See below for The Long Shop.

Corn mill
Many other businesses were drawn into Leiston to service the growing population including that of corn miller. In 1865, we find the first mention of a smock mill run by James Bedwell operating on a ridge carrying the railway line from the station over Valley Road and towards Thorpe Halt and Aldeburgh. Henry James Lambert is first mentioned as operating the windmill in 1892, alongside a steam driven mill. The slope from Valley Road up to the site is still known as Lambert's Lane and the cottage on the corner carries the familar cartouche of cream-white paint with the decorative serif lettering (note the inward-sloping 'H'): 'MILL HOUSE'. 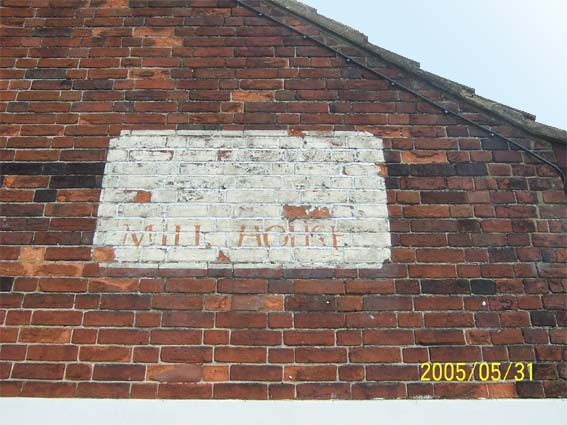 But surely there must have been something, perhaps an arrow, above the name? The mill was dismantled in 1917 when the use of wind power to grind corn became uneconomical, however some of the original buildings still exist at the top of Lamberts Lane.  Demolition was carried out by John 'Tiny' Brown who also demolished the mill at Snape, the base of which was later used as a house by the Suffolk composer Benjamin Britten. The mill stones from Snape were used in the refurbishment of Saxtead mill, just outside Framlingham. 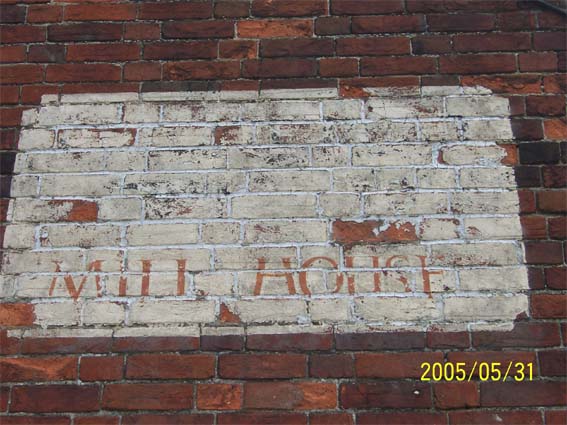 [UPDATE: 16.6.2014: "I have just chanced upon your photo of the old sign in Leiston (usually now called a "ghost sign") which refers to Mill House. My old school teacher, a Miss Reilly, lived there in the 60s (and probably had for years before that) when I was at junior school until her death (I think) in the 80s.
You ask if there was an arrow above the words "MILL HOUSE". The sign actually said "To Mill House" and above that there was a hand pointing to the left.  It looked a lot like the "Go to Jail" hand pointing on the Monopoly board. Shame that has disappeared but pleased to see the sign itself has at least survived in part.
Hope this is of interest to you and your community. Thanks for the photos! Best regards, Melanie Emmerson." Thanks to Melanie for the additional information.]

Church of St Margaret of Antioch 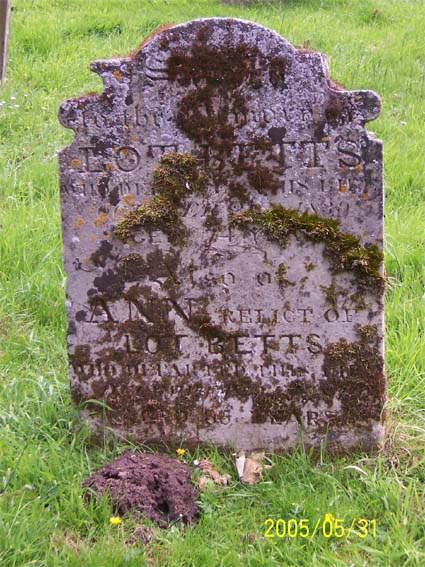 This is a gravestone close to the main door of Leiston church in Waterloo Avenue. An earlier photograph of the same stone from the 1970s formed the basis of a recently rediscovered oil painting by Borin Van Loon. We think it must have been the name of the grave's occupant which caught the eye in the early 1970s:

Hopefully Ann was not known in her lifetime as "Lot's wife. This 2005 view is replete with molehill, dead leaves and a wealth of algae and moss to obscure the ancient carved script. The nearby church is one of the most distinctive, not to say eccentric, ecclesiastical buildings in a county groaning with hundreds of historic churches and monastic ruins.

Leiston Church is dedicated, along with nineteen others in the county, to St Margaret of Antioch. She is said to have been the Christian daughter of a pagan priest, Aesidius of Antioch, during the reign of the Roman Emperor Diocletian. She was denounced as a Christian by the prefect Olbrius after she rejected his suit and was subjected to a number of hideous ordeals including being swallowed by Satan in the form of a dragon. According to legend, the dragon's belly burst open and she emerged unharmed. She killed the dragon (surprisingly still alive!) with a cross-tipped spear symbolizing the triumph of good over evil. She is the patron saint of women in childbirth and her emblem is a dragon. The church itself was probably built on the site of an earlier Saxon church, one of three known to have been in the area. A major rebuild, apart from the 14th century tower, in 1854 by maverick Gothic Revival architect Edward Buckton Lamb reshaped the interior of the church as a large auditorium for the evangelical preachings of the current incumbent John Blathwayt. Imaginitive use of Kentish rag stone, flint and French Caen stone for detailing gives the exterior a period appearance, but the interior is a riot of timber roofing beams and carving with some attractive painted surfaces in the chancel.

Leiston Works
No mention of Leiston's history is worth it's name if Garrett's is not included. Once the dominant employer in the area, Garrett's engineering works once occupied two large sites and was to Leiston what Ransome's was to Ipswich: big, wealthy, stinky, filthy and hard for the workers. Garretts was a family business from 1778 to 1932, after which the company passed into the hands of Beyer Peacock. The works finally closed in 1981. However, the historic core was preserved and opened as a museum in 1984. 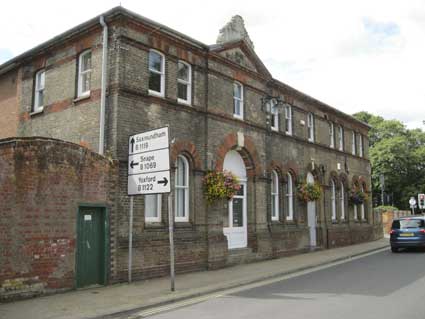 2013 images
Now residential, the Works Hall still stands and is (just about) named in screw-on lettering in the central triangle:

In the upper stone shield with lion rampant is a scroll bearing the words:

which is Latin for 'From God in all things'. 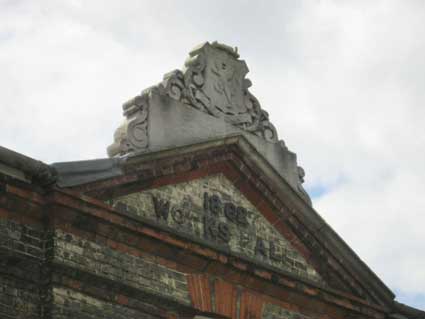 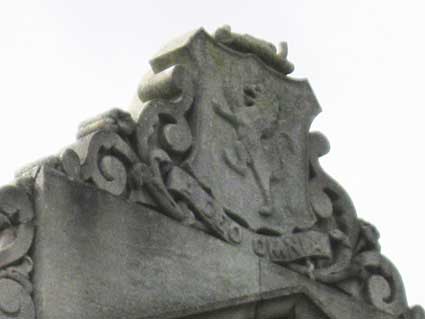 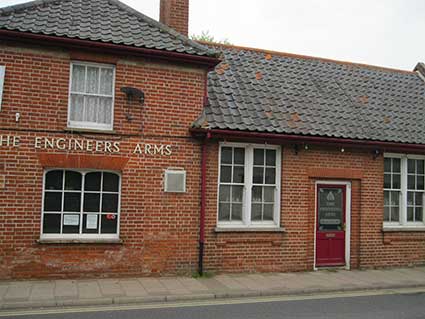 A glance across the road in summer 2013 showed that the once excellent The Engineers Arms was no longer open for business: 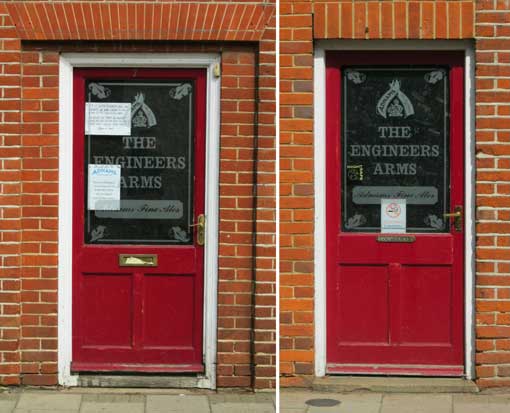 The 'frosting' on the glazed doors are almost certainly vinyls reading:

with the Adnams of Southwold emblem above. The door on the right bears the brass plate: 'LOUNGE BAR'. A sad sight at a period when so many public houses are closing throughout the country. 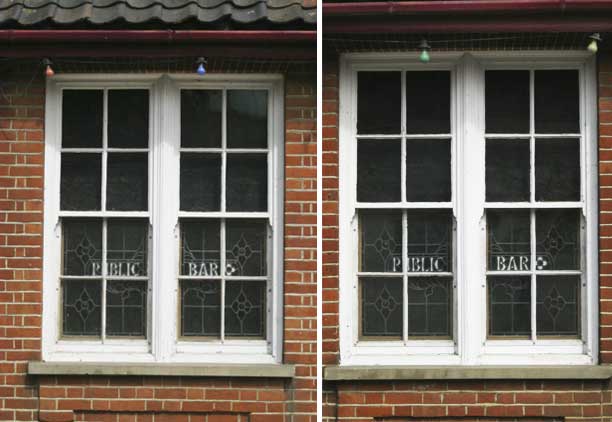 Two of the windows on this street have leaded light lettering:

The Long Shop Museum
The Long Shop is the name given to the oldest part of Garrett's historic engineering site with its collection of buildings full of exhibits and information. The door below at one end of the actual Long Shop building bears a cast iron lintel with the (slightly wonky) date: '1852'. The Long Shop, built in 1852-53, is a very early example of a building designed for assembly-line production. Given the importance of water in foundry-work, the works has the deepest well in Suffolk along with a large, restored, Grade II-listed water tower. 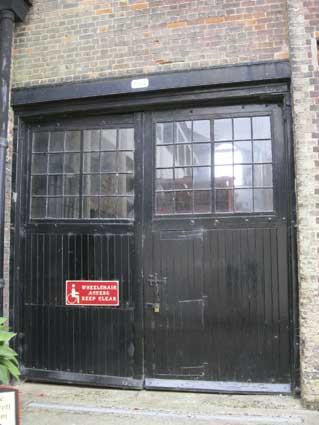 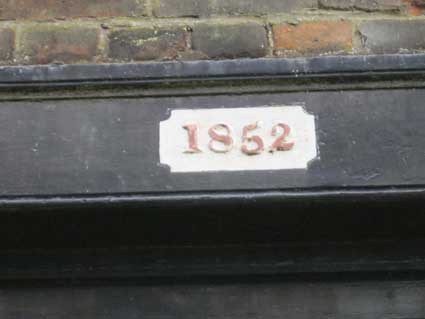 Outside behind chairs and tables on a terrace is a large cast beam bearing the notice:

The beam itself in restored condition has three cartouches carrying the legend: 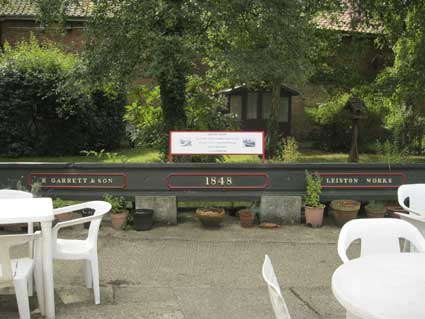 The museum has several of Garrett's steam engines, including Consuelo Allen, a road roller rescued from Spain, a very rare Suffolk Punch steam tractor and the rescued and restored Sirapite, the works' shunting engine. As well as steam engines, the works was famous for agricultural implements, and many are on display, including a threshing machine. There's also a living wagon, one of the wonderful caravans used as accommodation by the drivers of the engines when on the road. Much recommended. 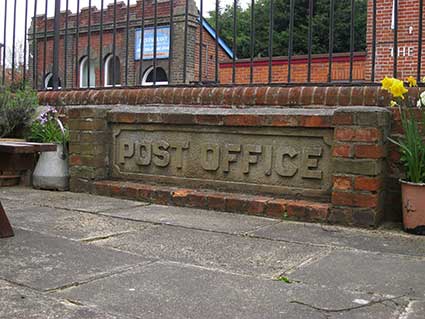 Above: another exhibit built into the perimeter wall is a carved stone cartouche: 'POST OFFICE', presumably rescued form an earlier post office building in Leiston during its demolition. 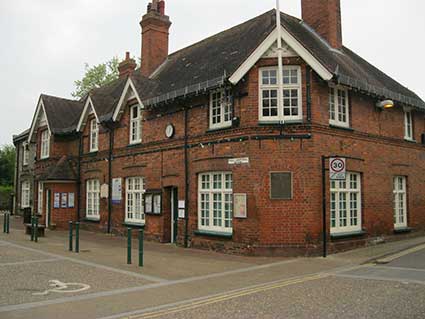 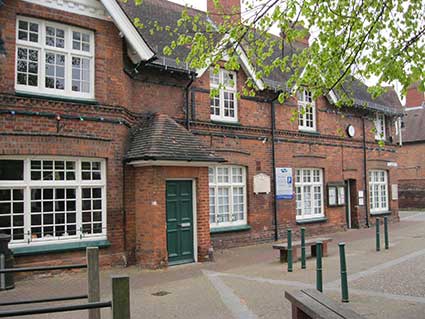 2015 images
Set back from Main Street are the  public library and Leiston Town Council offices.  The civic nature of the building is denoted by the typical castiron 'PUBLIC CONVENIENCES' sign, replete with arrow. This probably dates from the early 20th century and it would be nice to think that it was cast in the Garrett's foundry across the road. 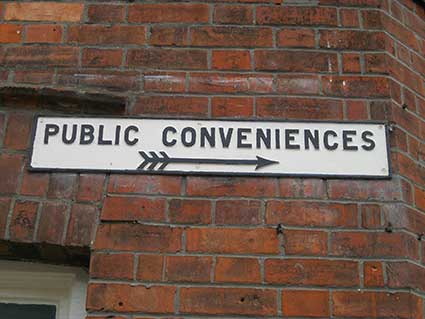 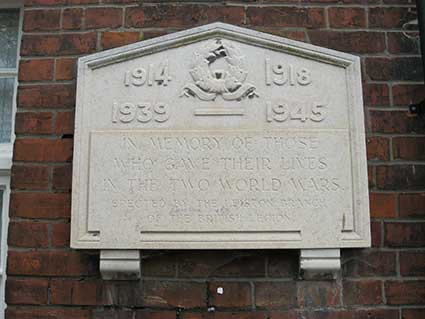 The building bears two war memorials.  The first is a carved stone plaque bearing the inscription:

Larger memorials with lists of the names of the dead are sited in the churchyard of St Margaret of Antioch (with a crucifix figure in bronze by Dorothy Anne Aldrich Rope – neice of the noted Suffolk sculptor Ellen Mary Rope – shown below) and in Leiston cemetery. 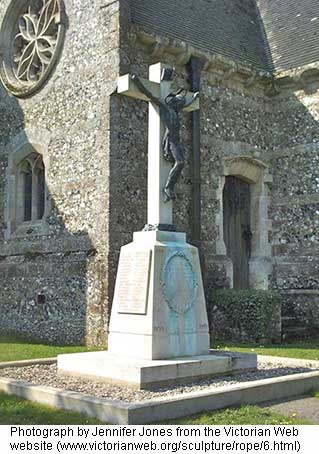 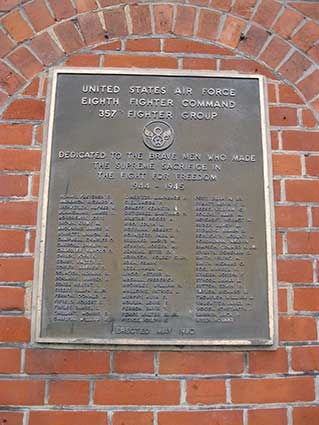 Above right: the metal plaque on the council offices commemorating:

followed by a long list of names and 'ERECTED MAY 1980'. Many will remember the presence of USAF staff in this area of Suffolk, concentrated around the air bases at Bentwaters, near Rendlesham and Woodbridge, near Sutton'. The American accents and overhead jet aircraft were commonplace after the Second World War, through the years of the Cold War and until the troops, their families and belongings were shipped back to the USA in huge transporter aircraft in 1992. 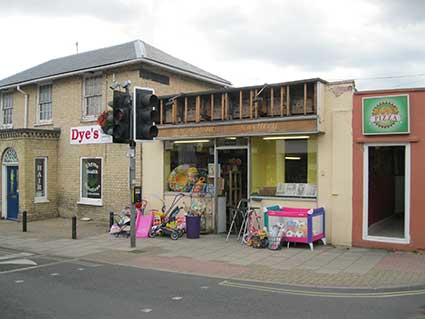 2016 images
In the summer of 2016 the small shop near the corner of the Cross Street, Sixewell Road, High Street crossroads had its name board removed to reveal a previous occupant: 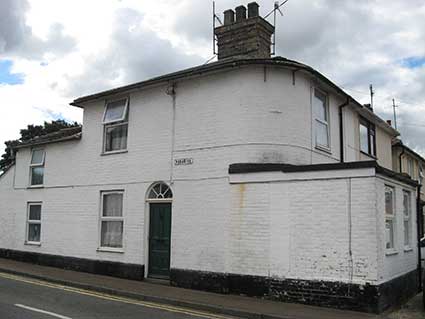 Although listed as 'Paradise Place' on some maps, the street nameplate – an attractive, cast iron, cartouche design (perhaps made in Leiston Works?) – is unequivocal. Paradise is defined as 'a place of timeless harmony', but quite why it is applied to street names is unclear. There is a Paradise Street, home of Birmingham Town Hall, in Birmingham. The same name can be found in Richmond, Southwark (both London), Bristol, Liverpool, Oxford, Cambridge and Sheffield. Paradise Lane can be found in Clitheroe; Paradise Parade is in Kings Lynn and there are doubtless further examples. Perhaps it is the age-old reason that Paradise is a pleasant word for a thoroughfare. 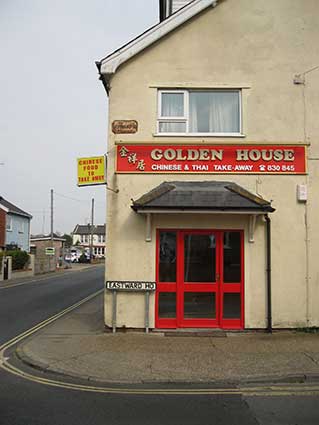 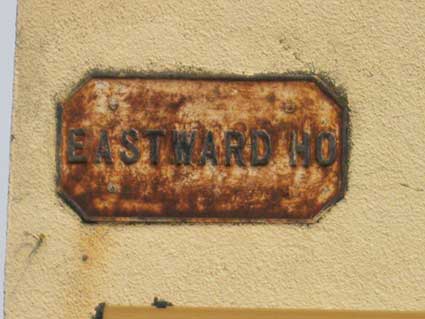 In the above photograph Sizewell Road runs off at the left towards the sea with Eastward Ho! (we like to see it written with an exclamation mark) marked by a modern street nameplate at pavement level and a much older cast nameplate high on the wall – rendered and painted around and bearing the patina of age. Its equivalent road is 'WESTWARD HO' which doesn't, sadly, have such a period sign. Westward Ho is notable for two reasons. Firstly, it runs away from the level crossing and Leiston Station (seen on our Saxmundham to Aldeburgh branch line page), parallel with the railway for a while. Secondly, it is the road serving Summerhill, A.S. Neil's pioneering school. In Leiston, he created a community in which children could be free from adult authority. Controversial at times, but recognised as an important contribution to educational thinking: 'Founded in 1921 and still ahead of its time'. 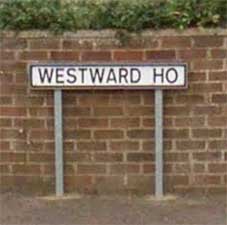 The only street nameplate for Westward Ho

Reading
May, D.Y. and K.: 'From flint knappers to atom splitters: a history of Leiston-cum-Sizewell'. Quickthorn Books, 2001.
Whitehead, R.A.: 'Garretts of Leiston'. Model and Allied Publications, 1964.