Called "England's finest market town" by many (in our view nearby Bridgnorth runs it close), Ludlow boasts a large marketplace in High Street – still used for thriving markets – and a fine castle, both set high on a hill. So many buildings (nearly 500 are of listed status) and streets bear plaques of information about their history. Approaching the High Street from King Street one sees a piece of trade lettering high up on a hipped gable:

It looks at first glance as if the letters are picked out in light coloured brick against the red, but the 'S' and particularly the slightly wonky ampersand show that this is probably hand-painted. We have not been able to find out anything about this company (see update below). 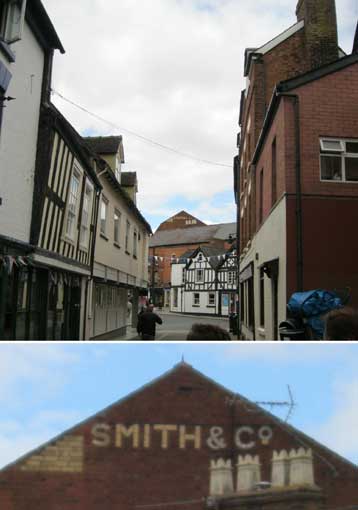 [UPDATE 13.10.2019: 'With reference to your Ludlow page item - the name 'Smith & Co' on the gable end of a building in town - this refers to an old company by the name of Gaius Smith. Paul Bernard.' Thanks, Paul. The Geograph page which Paul indicates gives a little more information. 'Bull Ring and King Street rooftops. "Smith & Co" refers to the grocery business of Gaius Smith, who in the late 1800s had shops at both 42 Bull Ring and 6 King Street, before moving to nos 9 and 10 King Street, the gable of which is what is seen here with his company name. He also served as Mayor of Ludlow from 1898-99 and was one of the founding Trustees of the Zion Methodist Chapel in New Road.']

Also in King Street, at number 15, we find the clothing shop Mistral which occupies premises once belonging to a shop called 'MAYPOLE' as displayed in a decorative ceramic mosaic doorstep. Maypole grocers (the shop still boasts preserved tiles inside) once traded from here. One online reviewer comments: "Remember them well in the 60s: supermarkets under the Lipton banner. They had meat counters for the first time & some of my friends at Dewhurst left & worked for them & were fast tracked to Area managers, They didn't have centralised buying in those days & were buying from the same suppliers as ourselves & with the cost of packaging & no small goods made in-house, They could only compete on convenience & cleanliness. But as they upped their game, supermarkets won the day."
Maypole dairies/grocery was a national chain. Branches have been traced in Tavern Street, Ipswich and there is a surviving 'MAYPOLE' step in Hamilton Road, Felixstowe.

The Buttercross stands at the junction of King Street, High Street and Broad Street. Just a few doors down the hill of Broad Street on the left, there is an old shop which still has its gold lettering on what must have been the inner front door to the premises. Some parts are obscured by the shelving unit. 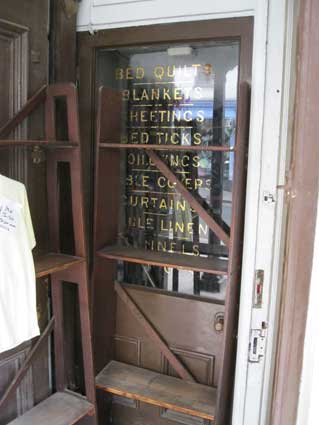 Upper Galdeford their is a plaque:

W. F. Marks was proprietor of the Ludlow Advertiser in the late nineteenth and early twentieth centuries; the building was presumably originally built as the newspaper's offices. Now rather mundane fast food businesses.

The railway came to the town in 1853 when Ludlow Railway Station was connected to the Shrewsbury and Hereford line. Many new buildings were built by the station to service the railway as well as other developments which made use of the easy access to markets which the railway offered. The most obvious – and much lettered – of these today is Marston's Mill (as seen from Tesco's car park).

Ludlow Foyer provides accommodation and training for homeless young people in the Ludlow area. Marston's Mill, a long disused grain store and well-known Ludlow landmark has been totally refurbished. New floors were inserted below the roofs, which necessitated cutting through the Victorian roof trusses and inserting new steel structures without affecting the external appearance of the building.

In the long perimeter road called The Linney there is a sign with characters in deep relief (and a little higgledy-piggledy in alignment) on a house wall: 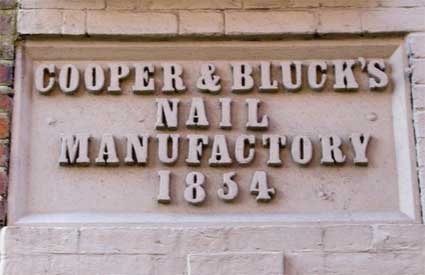