This picturesque Hampshire market town and port has a history traceable to Saxon times, but the 18th and 19th centuries have left the greatest mark on the architecture and businesses based in the town. The buildings retain a charm and, thank goodness, a utility which enables the community to withstand some of the stresses and strains of economic fluctuation. In other words, it's a bit posh.
31 New Street 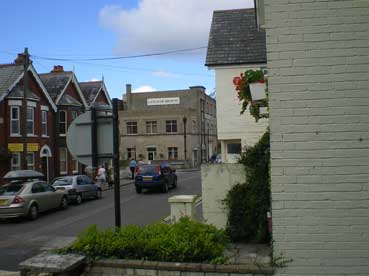 At 31 New Street stands a warehouse with the sign: 'LANGHAM BROWNE', the current owners. 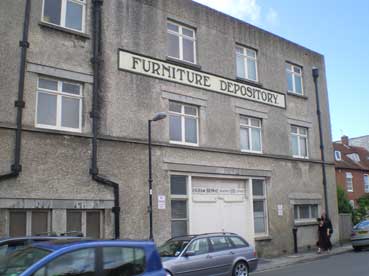 A panel of ceramic lettering, decorative font, dark against cream-white: 'FURNITURE DEPOSITORY'  And along the top of the double doors:  'LANGHAM BROWNE REMOVALS LTD 674300' 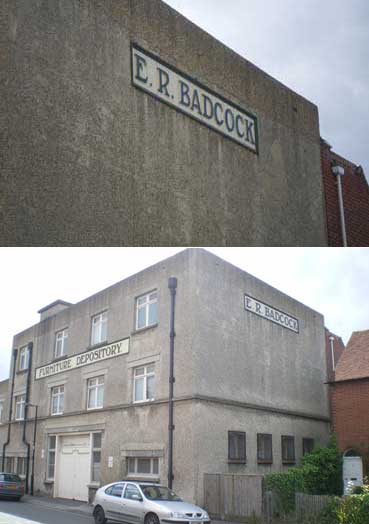 A similar panel of ceramic lettering is high up on the side wall: 'E.R. BADCOCK'. The depository at the corner of Emsworth Road was originally owned by Ford Furniture and Upholsterers; it changed hands to E.R. Badcock in the late 1940s.

Above, sent in by Adam Rand (see also below): "The front of the shop of Langham Browne which was on the high street opposite Rands [see below] - photo taken the day after it caught fire and burnt the roof. Langham Browne also sold furniture as well as offering removals and depository."
5 Western Road 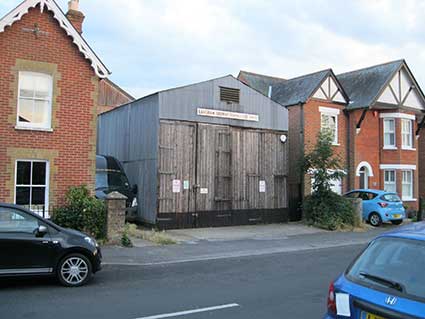 2016 images
The warehouse sign reads: 'LANGHAM BROWNE (REMOVALS) LTD' and the building meets a larger, longer warehouse running parallel to Eastern Road from which can be seen... 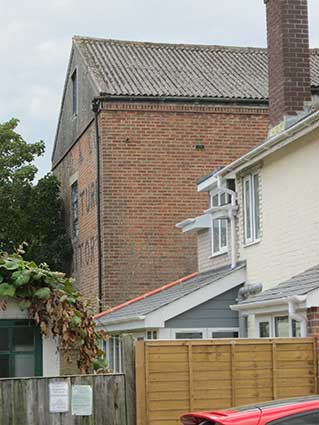 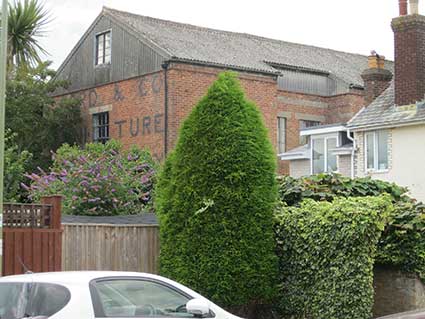 picked out in dark, projecting brickwork on the end wall:

The word 'Furniture is split either side of the central window, so there is a black brick hyphen after the 'i'. 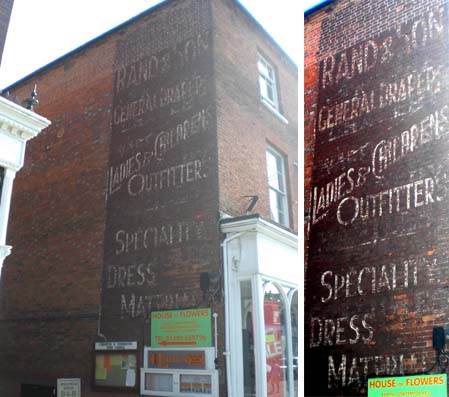 Further down High Street, towards the harbour, stands a shop with a fine piece of period lettering on its side wall, across from a small lane. (Incidentally, the company 'House of Flowers' (green sign above) is at 9a High Street. 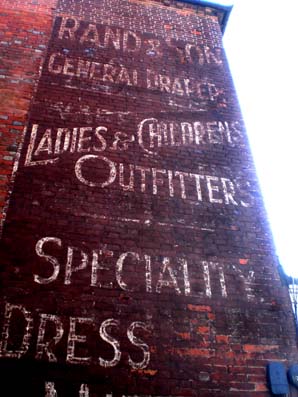 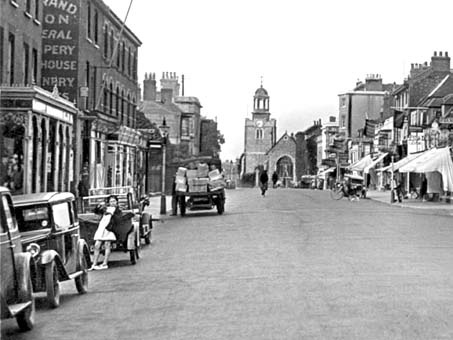 This enhancement, taken from below indicates that there are traces of other lettering beneath this sign, e.g. 'WARE...' above and behind the word 'Ladies'. While researching this sign, we came across the superb examples of tradesmen's lettering discovered by Ann Williams; she covers mileposts too. See Links for her website. The 1920s photograph of Lymington High Street to the right shows part of the original wall advert:

[UPDATE 10.6.2015: Adam Rand has contacted us with information and an image relating to his family business, Rand & Son. "A relation of mine has sent me the link to your page entitled Lymington/Rye. My point of interest is the Drapers shop – Rand & Son. This was owned by my father and started, in another location in Lymington, by his grandfather (W B Rand).  I have attached a clearer photograph for you taken probably in the 1960s. The earlier photograph you show could be the 20s or 30s but not later.
You speculate on the hidden wording which is likely to be: 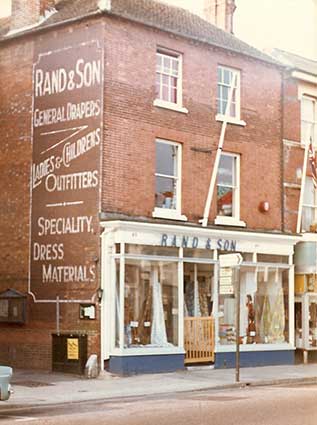 The wall lettering is still there but the Rand shop was sold sometime ago and the sign is now looking a little faded."
Adam also kindly sent the image of Langham Browne shop (see above) and the following: "...a sign unfortunately not there any more although the building still is. This was on the north side of St Thomas Street to the west of the church."] 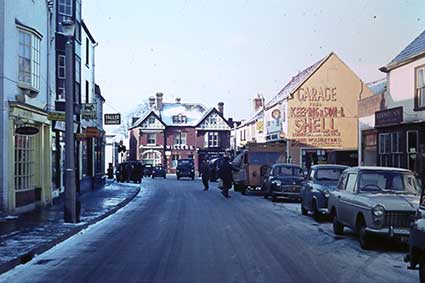 The rather curious layout of lettering on this end wall (note the tiny 'T' and 'D' of 'LTD') reads: 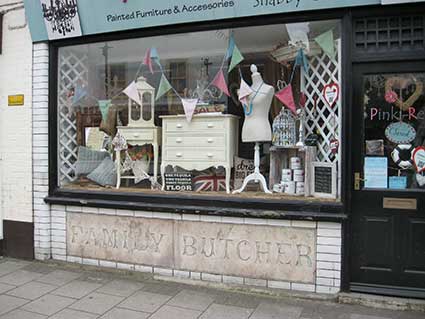 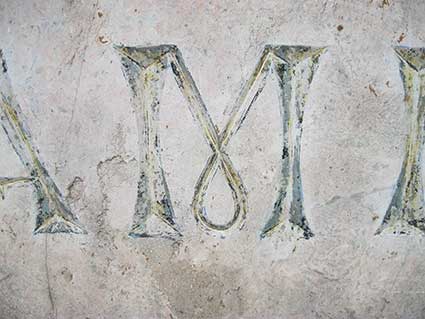 2016 images
A 'painted furniture and accessories' shop in 2016 features 'FAMILY BUTCHER' lettering beneath the shop window (the white tiling is a clue); by the look of things the colouring in the characters has been scrubbed to reduce its prominence. 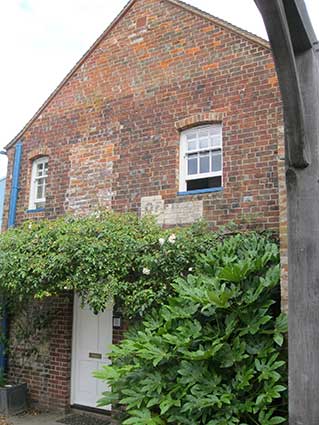 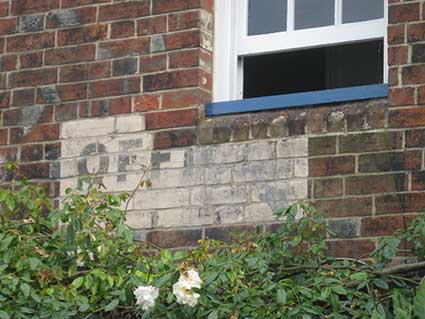 Parallel with the Lymington River is Bath Road. No. 2 is Shipyard House and it looks as if No. 4 is Shipyard Cottage – converted commercial premises. The pale rectangle with 'OFFICE' in black capitals has clearly been eaten into by the insertion of a window during conversion into a house.

Rye, Sussex
Only a hop, skip and a jump away from Lymington is Rye in Sussex, so we've included this example here. Rye shares the high poshness rating of Lymington (Rye is the template for E.F. Benson's Tilling in the 'Mapp and Lucia' novels), as well as being a port: one of the Cinque Ports, in fact. From a bench in the churchyard we espied a remarkable lintel above the triple window next to the front door of a house close by. 'EAST SUSSEX COUNTY POLICE' is cut into what appears to be a slab of stone (see depth of it as it turns the house corner). This is now a private dwelling. There's another house-that-used-to-be-a-police-station in Halesworth. 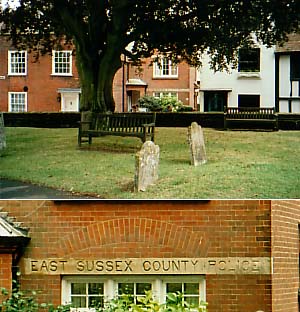 Home
Return to Historic Lettering from outside Ipswich
Please email any comments and contributions by clicking here.