The end wall of this building in Chester is remarkable for its brickwork as well as the lettering painted on it. The evidence provided by the verticle lines at either side of the advertisement indicate that this painted version was covered by a hoarding at a later date (the framework of which was painted, thus leaving the marks). This was probably the saving of the Bovril lettering and its wonderful blue ground:


in yellow/beige sans-serif capitals with a narrow drop-shadow.
The Bovril company were well-known in the Victorian era from early advertising campaigns, lithographic stone posters, press adverts. Who could forget the muscular bull strapped to a chair with the slogan 'Bovril By Electrocution'. Almost makes a vegetarian feel smug ... Clearly the tradition of the hard sell for this rather humble black paste is continued here. There is even the bonus of a glimpse at lower left of a painted street name on the bricks (now replaced by a metal sign, no doubt).

'BOVRIL' certainly got around big-time. Here's a fine example used by permission from the website run by urban75.com including the brief caption. The link to this site is included here. The blue background still seems to be there (as above) with bold dark blue caps on a white panel to proclaim the brand for, presumably, miles around! The bands of red brickwork are somewhat puzzling and are presumably the result of later work on this end-wall.

"It probably won't be long before it's painted over, so I wanted to capture this glorious old Bovril sign facing Windrush Gardens, Brixton."
[July 2003] photo © Mike Slocombe www.urban75.com Photo used by permission.

It is not such a leap to move from one famously branded beef product to another with a similar advertising pedigree. The humble Oxo cube does not seem that significant, yet its presence in advertising to the present day makes it ubiquitous. Dating from 1899 it also has the benefit of being spelt with just three characters, one of them a repeat (and it includes the word 'ox', of course). This simplicity was of great significance when the Liebig Extract of Meat Company demolished most of an old Post Office power station on the south bank of the Thames and erected a cold store in the 1920s. Liebig wanted to include a tower with illuminated advertisements for their products, but were turned down by the authorities. Company architect Albert Moore built into the top of the tower, on each face, three vertically spaced windows  (circle, 'x', circle) in the deco style of the period which, coincidentally spelt out a familar brand name. After a cheqered history resulting in a period when it stood empty and unloved, local opposition in the 1970s and 80s to total demolition of the buildings and tower by property developers saved this London landmark as part of the Coin Street development. The Oxo Tower is now posh shops, apartments and, at the top, a restaurant (plus, when we visited, a public viewing gallery - you might need to screen out the yuppies swigging Bolly while looking at the magnificent vista of the Thames and London). You can best view the actual 'OXO' lettering from the river. 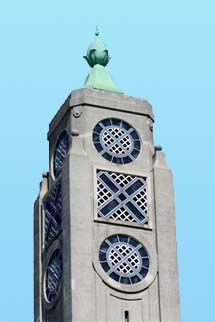 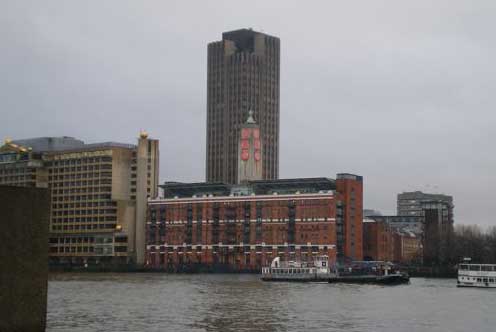 Right: as twilight falls on a wet winter day, the view of the Oxo Tower from the Victoria Embankment across the Thames, shows the neon-lit 'OXO' lettering. The tower itself is dwarfed by King's Reach Tower behind it. More on Waterloo and its environs here.