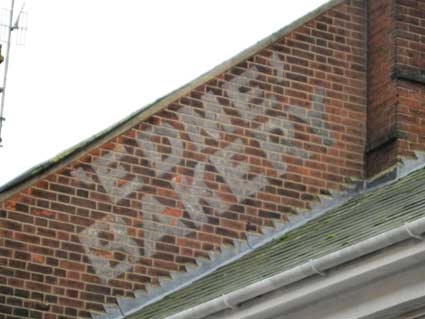 2014 images
These two examples of traders lettering are a few hundred yards apart. Above, at 6 Dogs Head Street:

more or less follows the slope of the lower roof of the adjoining property. This is above a kebab takeaway in Dog's Head Street, opposite Sainsbury's. The trade name within the single inverted commas brings to mind the Edme Brewery (it's lettered on a large brick built industrial chimney) at Mistley near Manningtree on the River Stour – a company now known for its homebrew kits containing hopped wort extract. The English Diastatic* Malt Extract Company, formed in 1884, later became known as 'Edme'. Today the main production at the Edme factory is a range of flours and flakes used in the bakery and food industry internationally. This could have been the reason for the 'Edme Bakery' sign in Ipswich however, having contacted the Edme company, they have no record of owning the bakery, nor sponsoring it in terms of the sign. Perhaps the malted bread baked there used Edme products, but there is no evidence for this.
[*As all grains sprout, natural enzymes within the grain break down the starch within the grain into simpler sugars which taste sweet and are easier for yeast to use as growth food. Malt with active enzymes is called 'Diastatic malt'. Malt with inactive enzymes is called 'Nondiastatic malt'. The enzymes are deactivated by heating the malt.] 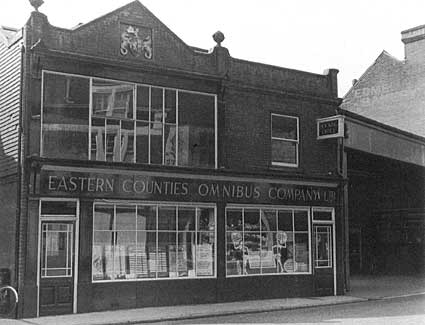 This photograph from our Coat of Arms page shows, just visible, extra 'Edme Bakery' lettering on the east facing side wall of the building.
Many of the buses arriving from Felixstowe and Woodbridge areas would drive through the garage (at the right of the photograph) in order to gain entry to the Old Cattle Market bus station. The building beside the garage was Eastern Counties booking and information office. This was previously the Ipswich Arms public house. The town crest can be seen in the small brick gable. All of these buildings associated with Eastern Counties have since been demolished, but the coat of arms was clearly rescued (or another version made) and resited as we see it today.
[UPDATE June 2008: The photograph of the Old Cattle Market from around 1908 - below - shows not only the long demolished buildings to the left of Dogs Head Street and no. 46 (clearly numbered on the right and which stands where the country bus station now operates), but very recognisably the Plough public house and behind it the 'Edme' Bakery lettering which survives to this day.] 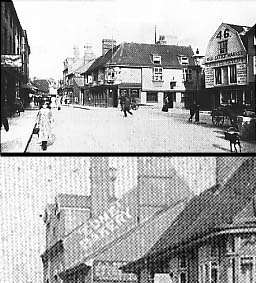 'EDME' BAKERY in the trade directories
(selected detail in some years)

From the earliest entry (1844), the description of the ‘Edme’ business varies from baker to café in more recent years. The combination of the two is first seen as early as 1885. From 1935 to at least the 1960s, the café was run by Cyril Copsey. Sadly, at no point do we see the name ‘Edme’ applied to the bakery business. It is possible that the sign-writing at each end of the building was commissioned by James Raymer, the baker listed in 1906 (but who could have been the proprietor from around 1884, as we have no directories for the intervening years). At some date before 1934, the 'Ipswich Parcel & Goods Express Carriers' became 'Eastern Counties Omnibus Co. Ltd (traffic and booking office)' and the bus entrance was cut through – as shown in the monochrome photograph above – with the booking office near the corner with Lower Brook Street.

sits on a cream background. There are larger letters 'A. R' under the 'first part of 'Drink': presumably an earlier sign. This is a challenge for those who like to spend their time trying to decipher old signs: the slogan comes and goes as you stare at it. You have to ensure that you're reading darker characters against light background to make out 'Topall'. 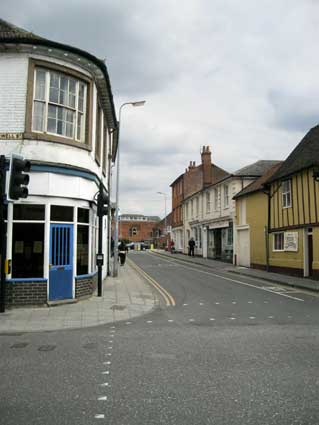 2012 images
The photograph above left shows to the right the end of the Spread Eagle public house which has Eagle Street and Fore Street street nameplates.
[UPDATE 28.5.2014: After torrential rain, which may have been a factor, the sign changes and the shop's proprietor and business appears more dominant:

with the word 'Clothier' in small caps running across the word 'Topal'.]


[UPDATE February 2007: This solved the Topaz/Topak (sic) Tea brand name mystery on the building in Eagle Street. Browsing through the book of Dave Kindred's 'Suffolk from the Archive' period photographs, we found a shot of Orwell Place (formerly Stepples Street) looking away from the town centre towards Eagle Street - you can recognise the timbering and fenestration of the Spread Eagle public house at the left in the image below. It is the painted advertisement on the side wall of the building on the right which catches the eye:

Having examined the side wall of the building today, there is clear evidence of a reddish brick paint over the whole surface, which suggests that the lettering is still hiding beneath it.]
See our Turret Lane page  for a 1902 map of the area. 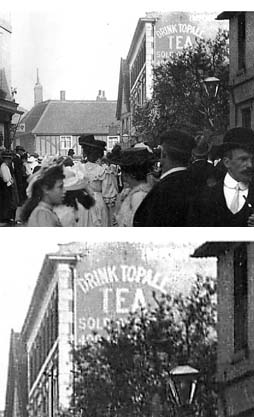 The side wall of 8 Orwell Place also appears in this 1980s photograph from the Ipswich Society Image Archive. The panel reads: 'KAYS WAYS PAYS' and presumably refers to the business once carried out at the premises of H.F. Williams. The close-up shows the traces of the earlier, curving 'DRINK TOPALL' lettering between 'KAYS' and 'WAYS'. 'Kays Ways Pays' was the motto, or advertising slogan, used by the mail-order company Kays of Worcester in the 1950s and 1960s.  The slogan was used to encourage both existing and new agents to sell the company's products and services, that were on offer in the catalogue, to their customers. Here, however, it was aimed directly at the public. 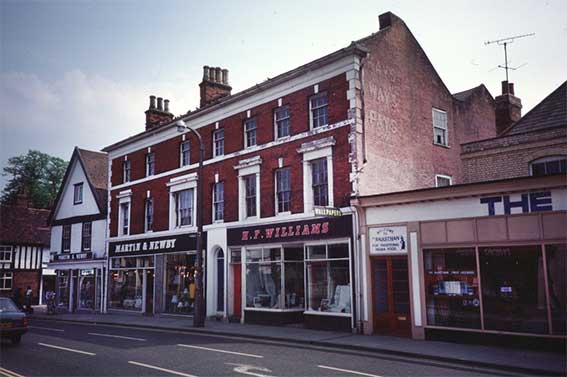 10 Eagle Street
And on the other side of the Topall Tea advertisement: it's The Leaning Tower of Eagle Street with a blank cartouche high up which once carried an advert.
Below: the sign, still indecipherable in 2015, photographed from the junction with Waterworks Street. 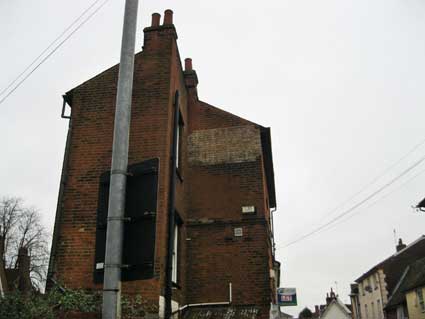 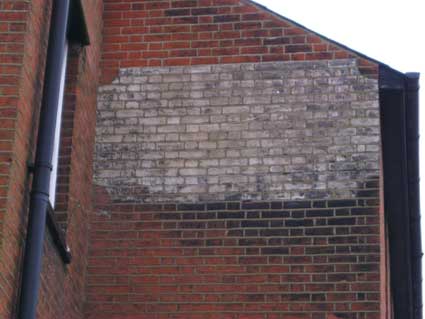 2015 images
Just round the corner from the 'Drink Topall Tea'  sign is 'Palmer's Door Mats &c.' as a comparison. 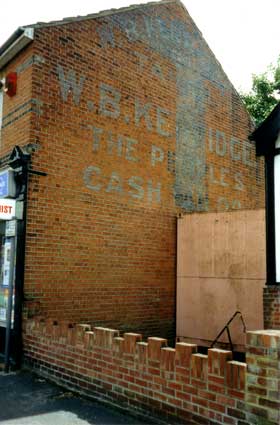 On a much larger scale:

remains proudly on the end wall of the chemist, J.R. Barbour at 119 Bramford Road, close to the Suffolk Record Office and the two lettering examples of Bramford Road School. In this photograph from 2001, the lettering is partially obscured by a container and a discolouration on the wall. In pristine state it must have been an eye-catching advertisement of affordable tailoring for the people for those travelling from the Bramford direction. The retouched image (below) gives an impression. 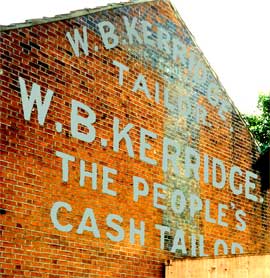 This must be one of the biggest examples of trade lettering in Ipswich, rivalling in its scale (if not its quality and elaboration) the example in Hamilton Road, Felixstowe: 'E.F. Andrews'. 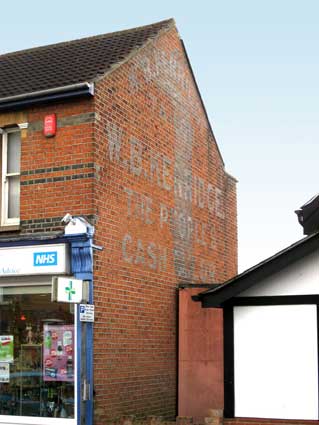 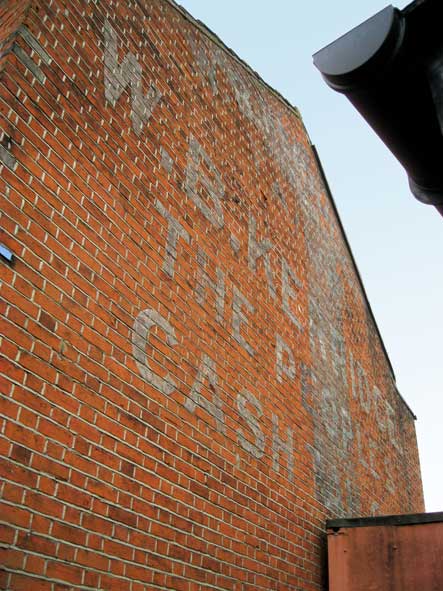