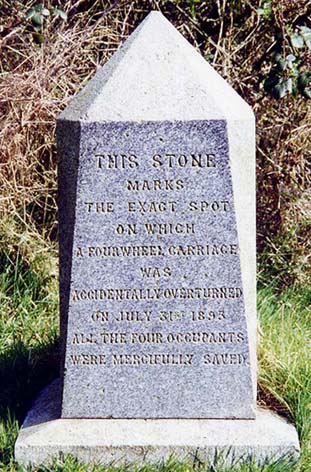 'THIS STONE
MARKS
THE EXACT SPOT
ON WHICH
A FOURWHEEL CARRIAGE
WAS
ACCIDENTALLY OVERTURNED
ON JULY 31ST 1893
ALL THE FOUR OCCUPANTS
WERE MERCIFULLY SAVED.'


The small monument is close to the Orwell shore near Freston Tower, just a few miles from Ipswich on the Shotley peninsular. Bathos in mineral form, this splendid memorial commemorates an event which clearly moved those involved. It is only when one gets to the last line that one gets a similar reaction as when one reads the news headline: 'Tallest Man In The World Falls Over'. A testament to the stonemason's craft, it is in excellent condition on its bevelled plinth. The other thing which strikes us is its resemblance to an ophthalmologist's sight-test chart. 'If you can read: "... were mercifully saved." Mrs Widmerpool, you must have the eyes of an eighteen year old.' Thanks to the late David Kibble for the image and for opening up the whole subject of monumental lettering. 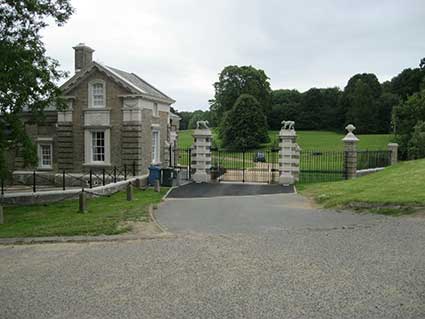 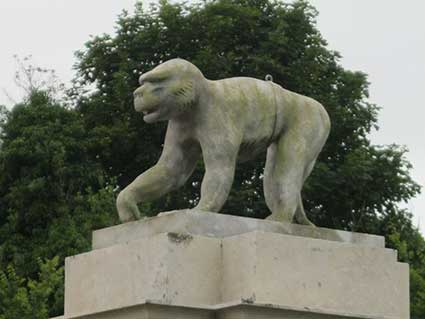 2016 images
The monument stands close to a carriage-drive which ran from the hill between the Strand and Freston Boot (the lane down to Freston Marina is to the left in the above photograph). The attarctive building guarding the entrance to the carriage-drive is called the Monkey Lodge, for obvious reasons. The drive ran downhill from here between an avenue of copper beech trees (one row of these fine trees is still standing), around the bottom of the hill on which stands Freston Tower (shown at the bottom of this page) and along the foreshore to Woolverstone Hall, home of the Berners family (after whom Berners Street in Ipswich is named – see Street name derivations).  Looking at the state of the marshy foreshore today, one wonders that it would take the beating of multiple horses' hooves and iron-banded carriage wheels. 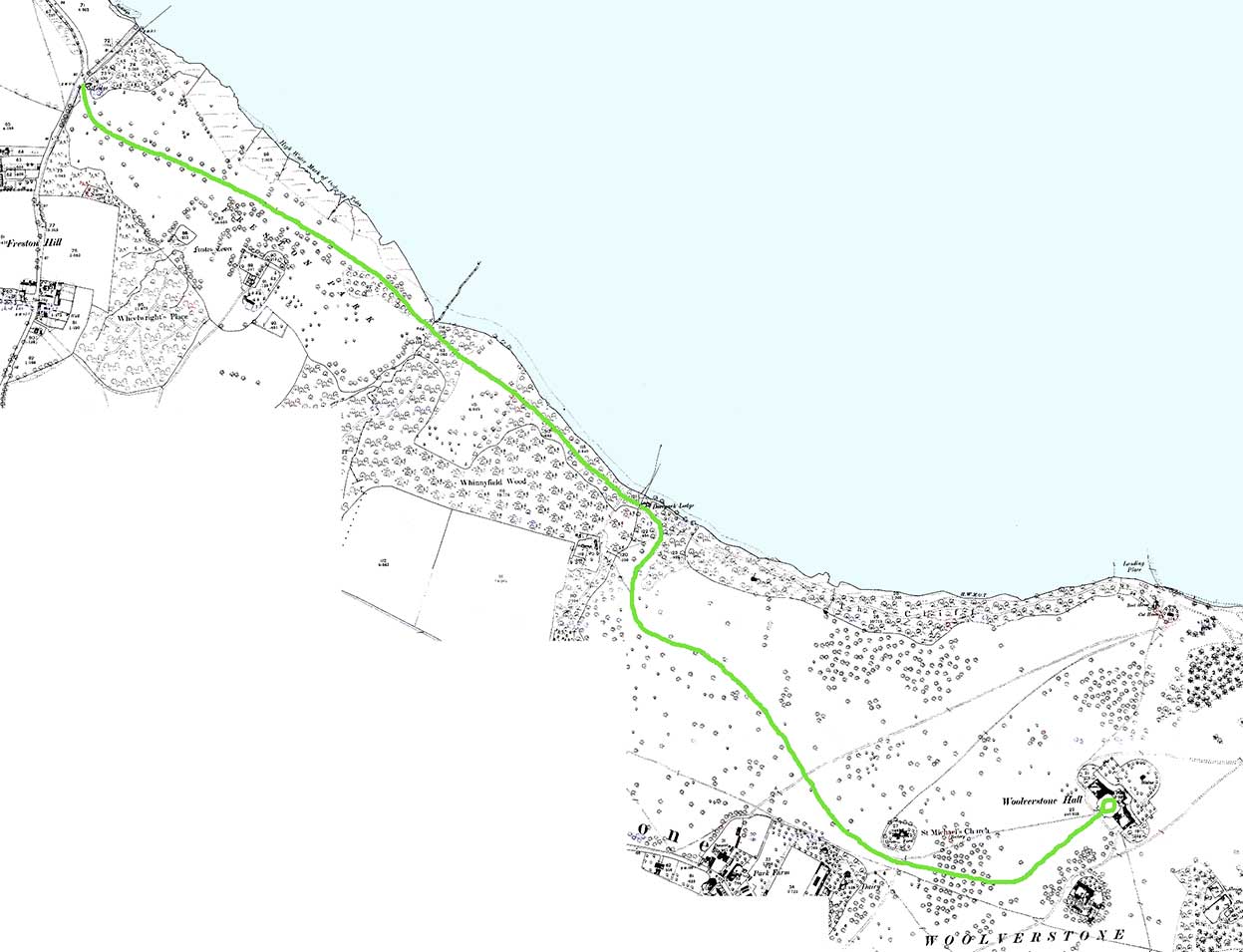 Above: the 1882 map of this section of the southern shore of the River Orwell shows, at top left, the road from  Wherstead to Woolverstone Village; as it takes a turn away from the river, it passes Monkey Lodge (here marked 'Lodge'). The green line follows the carriage drive through the beeches, passing below 'Freston Tower' (marked in gothic script) – this area is marked 'Freston Park'. It follows the shoreline until it reaches 'Deerpark Lodge', the turns away from the river and runs up to pass 'St Michael's Church', curving round to reach the circular drive in front of 'Woolverstone Hall'. The Hall itself was built in a north-west/south-east orientation as the river bank curves around the site. The 1882 map clearly shows the 'Landing Place' on the river, which was presumably used to access the Hall and perhaps deliver building materials and supplies in the 18th century. Just inland from this is a building labelled 'Cat House', The Gothic-style Cat House, which stands today, is reputed to have belonged to a man who was sympathetic to boats carrying contraband along the river. When his favoured cat died he had it stuffed and when he could see that no customs boats were patrolling the river, he put it in the window to signal that the 'coast was clear'. The mounted cat sitting in the window is still pointed out to those on river cruises today. This was clearly the right place for a commercial marina for leisure boaters and for the Royal Harwich Yacht Club, slightly to the east. The latter is a Victorian yacht club formed in 1843 and has had many Royal connections: Prince Philip is the current Patron. The yacht club moved to its present site (quite a long way from Harwich in Essex) following World War II after its previous premises had been demolished for the expansion of the Navy Yard at Harwich. 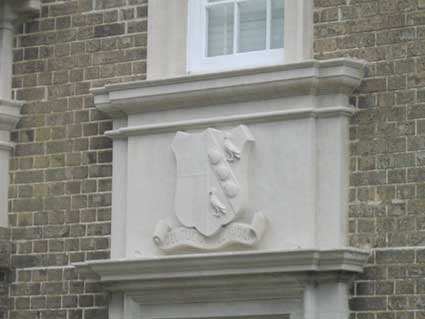 Why the monkeys?
A story tells us that William Berners’ pet monkeys raised the alarm when Woolverstone Hall caught fire enabling the family to escape unharmed. Following this, Berners had images and statues of monkeys made to adorn the Woolverstone Hall estate. The monkey was adopted as an element in the Berners family crest, although it does not appear on the stone shield above the motto on the lodge in the photograph above. The sculpted, baboon-like monkeys are shown with a kind of belt arond them with a ring near the spine, which suggests that they were pets that could be kept on a tether.

See our Ipswich High School page for an image of the Hall and our Woolverstone Village page.

Freston Tower: the oldest folly in the country? 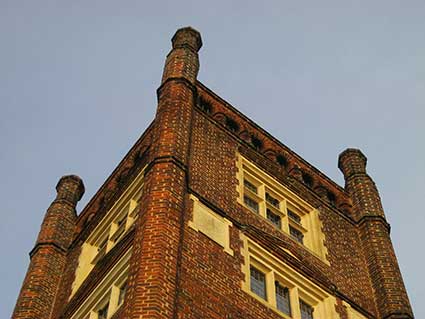 2016 images
Mention of Freston Tower gives us the opportunity to give a little detail about this fine landmark. The tower stands high up above a steep grassy bank which slopes down to the Orwell River basin. The view from the top of the tower is of the wide river with Piper's Vale and Nacton foreshore on the other side plus, in modern times, the Orwell Bridge with Ipswich docks in the distance. It was been completely refurbished as holiday accomodation by the Landmark Trust in 1999 (you have to like stairs). Described in Gwynn Headley's Follies - a National Trust guide (see Reading List) as reputedly the oldest folly in Britain, it was thought to date from 1549, but dendrochronology fixed the date to 1578/9. Incidentally, this is the same year as the building of the bizarre flight of fancy that is the gatehouse to Erwarton Hall further down the Shotley peninsular: 'It resembles nine brick Saturn V rockets in a square of  three by three' (Headley). 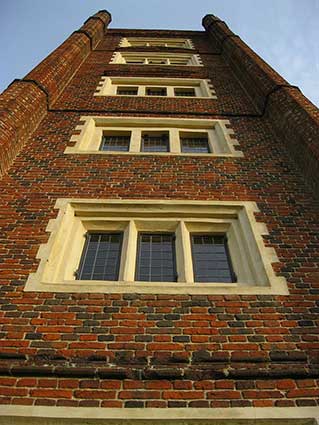 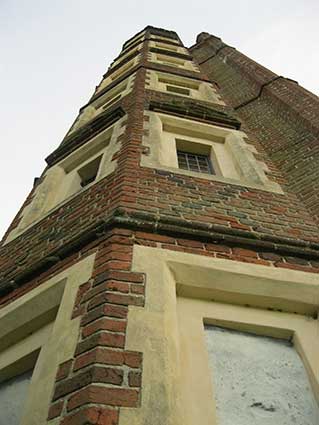 Freston Tower is a six-storey building: a single chamber on each storey. In 1850 a novel entitled Freston Tower was published by the Reverend Richard Cobbold, most famous for his 'imaginative' novel The History of Margaret Catchpole. His largely fictional plot centres on the daughter of Lord de Freston, the beautiful Ellen, who in the late 15th century studied a different subject on each floor. The legend goes that on Monday Ellen studied Charity on the ground floor; on Tuesday, Tapestry on the first floor; on Wednesday, Music on the second floor; on Thursday, Painting on the third floor; on Friday, Literature on the fifth floor; on Saturday, Astronomy on the sixth floor and on Sunday she attended Freston Church. A scurrilous version of the story has the lovely Ellen ending up on the roof on Sunday in the arms of the builder, furthering her education in another manner. This remarkable survivor from the 16th century is quite remote from the highways and byeways - one reason why it has escaped demolition or 'modernisation' in the intervening years, perhaps. A gem of of which Ipswich can be truly proud, this tower existed before Shakespeare was born and has stood silent witness to the trading craft thronging the River Orwell during the industrial revolution, now largley replaced with leisure craft, while the surrounding countryside (the Orwell bridge aside) has remained largely unchanged.

2013
Panorama from the roof of Freston Tower: view over the Orwell estuary and the Orwell Bridge (see our plaques page), Heritage Open Day Sunday 15 September 2013. Freston Church is just visible above the tree line mid-left. 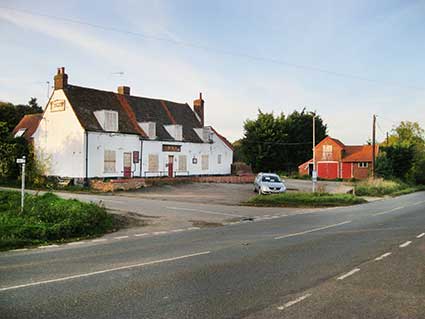 2016 images
There are, at a rough count, around ten public houses in the country called The Boot. Oddly, we used to have two more of them on the Wherstead to Shotley Road: Freston Boot and Shotley Boot. There could be a link to the branding of the long, military footwear inspired by the Duke of Wellington and the Wellington Boot. Sadly, the Freston Boot has been closed for business since May 2010 when it was bought by the nearby Paul's Estate, as was the forge opposite the pub. It's a sorry sight in 2016. We learn from a local resident that both buildings are Listed Grade II. The core of the pub is thought to be 17th century. The similarly boarded-up forge contains a main forge and a baby forge in the corner (quite unusual) with a saw-pit in the yard behind and a wheelwright's circle; indeed the 1882 map shown above names the wood nearby as 'Wheelwright's Place'.

The old forge: a footpath leads from the lay-by shown here to Freston Tower (discussed above).