It's not clear why it's taken until 2012 to make web page for Hadleigh, but in strolling around on a cold February afternoon, we cam across some unexpected delights.
At the far end of the High Street is Bridge Street and, taking our life in our hands with busy traffic, we took these photographs of a vestigial lettering panel which is covered by the modern metal street sign. We're having some difficulty making out the curly font used for the company name, but below it (with other lettering underneath) we think is:

If anyone remembers the name of the firm, please click the 'Contact' link at the foot of the page. 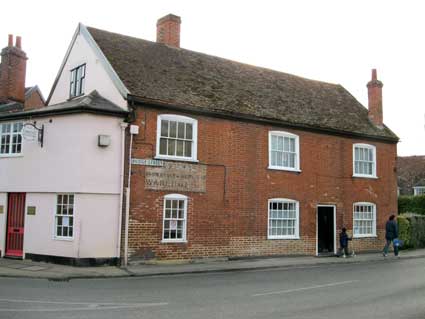 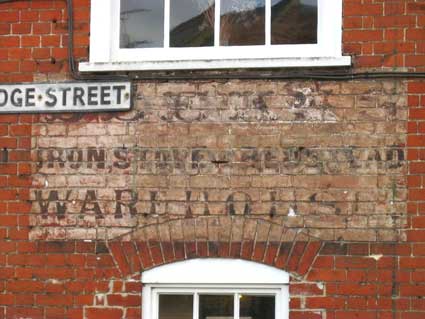 The Shoulder of Mutton (former public house) at 126 High Street 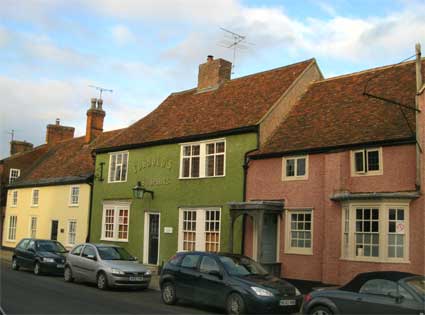 The absence of the name Tolly (for 'Tollemache') indicates that this lettering predates the merger of the two breweries in 1958. The curving relief capitals above the smaller characters and ampersand shows that this lettering is well cared for. The buildings to the left were clearly(the original?) part of the Shoulder Of Mutton Inn. The certainly have that tavern look about the architecture with a large access to the cellar at pavement level. A photograph found on the invaluable Suffolk CAMRA website (see Links) indicates that the building was restored in 1918 and that the whole frontage was the inn. Thanks to them for permission to use their image. In the above 2012 photograph, you can still see the horizontal bar in the upper right from which the inn sign originally hung.

The CAMRA site gives us interesting information that the building is believed to date from the 16th century. Their list of publicans runs from 1823 until Mrs Alice L. Sargeant in 1922. The pub closed for business in 1922 and is now at least two private residences.

Also in the High Street are a couple examples of dated house fronts with intials (probably of the original owner) incorporated. This one at 79-81 High Street took our fancy:

The naive quality of the characters is endearing, also the raised swag and decoroative motifs picked out in dark red against white.

62-66 High Street is a very attaractive building with leaded light fenestration on the first floor ('Ipswich windows'), topped by a modillion cornice and decorative frieze, all nicely painted. It was only in 2015 that we noticed that the leaded light third from the left has a date in the centre of the 'fan light': '1676'.

2015 images
This building is Listed Grade I. The Listing text reads:
'Nos 62 to 66 (even) HIGH STREET (North East Side)
TM 0242 3/108 26.4.50.
I GV
2.
An exceptional and important C17 building with much fine and original detail. 2 storeys and attics, timber framed and plastered, roofs steep pitched and tiled. 3 gables at back and more original detail. The South front upper storey is the most interesting feature. It has a richly carved modillion cornice and fine range of 6 windows with original lead glazing. Each window is of 3 lights with arched central light. (cf. Sparrowe's House, Ipswich). Most of the fittings are original. In the arched head of 1 central light, the date l676 is worked in lead. The upper storey formerly projected in front but has been underbuilt in brick with several small shop fronts. There are 6 flat-headed dormer windows. NMR photos. Nos 60 to 68 (even) form a group.'

Water pump
Walking past the church and Deanery and down a passage to the Guildhall, the remarkably well-kept pump can be seen. Clearly marked 'RANSOMES IPSWICH' in a circular format: 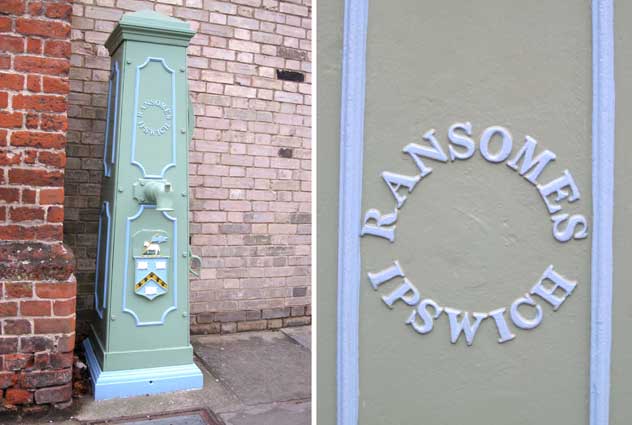 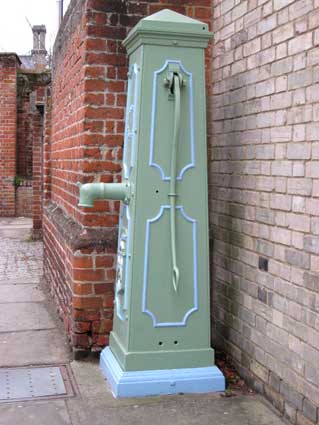 'A smartly-painted cast iron pump in the Market Place, Hadleigh, Suffolk, sporting a coat of arms which was awarded to the Town in 1618, and described as: "azure a chevron erminoise between three woolsacks argent". And the crest "on a helm a wreath or and azure, a mount vert thereon a lamb standing argent holding a banner azure with a woolsack argent, the staff or mantled argent doubled gules, tasselled or".' This description from the Village Pumps website (see Links).
It's instructive that we have not been able to find any similar lettering in Ipswich apart from the shadowy characters 'Ransomes' on the old electric lorry and trolley bus depot, despite the company's huge importance in the story of the town. It is also a shame that the only Ipswich water pump on this site is tucked away behind the Isaac Lord buildings (and nowhere near as grand!). 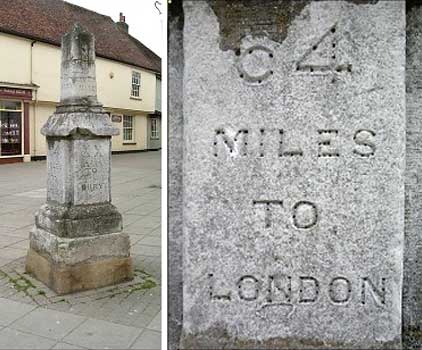 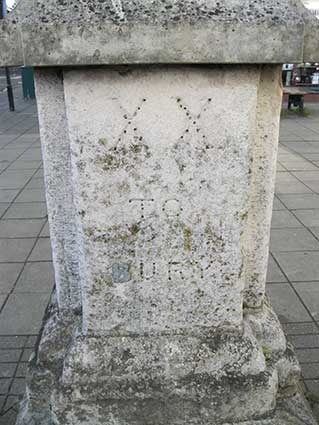 Near to Partidge's extensive hardware shop on the High Street stands an obelisk with inscriptions. Clearly restored in the late 19th century, the leading in the characters which show the destinations and distances has almost all fallen, or been picked away. Interesting that the distance to London is shown in Arabic numerals and all others are Roman; perhaps 'LXIV' is too big to fit onto the lower tablet.