Lowestoft has a proud history as a fishing port, but the decline of this industry in recent decades has left this large town on the mouth of the River Waveney finding new roles apart from that of a seaside resort. The railway station (below) must have one of the few remaining British Railways signs in the country. It is in surprisingly good condition, too. If memory serves British Railways was rebranded as 'British Rail' with its red and blue arrow logo during the late sixties (not to mention the nineties massacre of our rail services), so this sign must predate this. One would have imagined that, in its day, Railtrack would have replaced this sign - but it could be listed ... anyone know?

Not far from the station on Bevan Street East stands a humble building, once a small furnishers:
STOP HERE
GEO. ARMES
FURNISHING
(then two lines of previous faded lettering including the last word 'FURNISHING' just above the wood/tile porch). 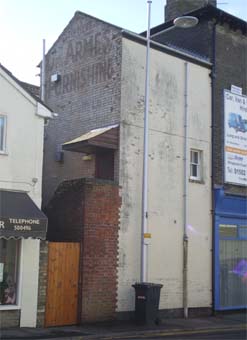 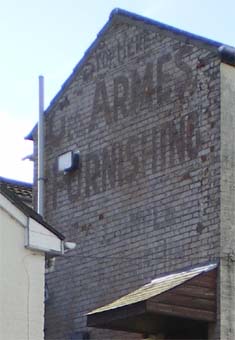 Proceeding towards the Bascule Bridge over the Waveney, we find another furnisher's sign: a near-complete, massive wall advertisement.
'FURNISH AT TUTTLES
UP-TO-DATE
FURNITURE GALLERIES'
on a pale coloured painted area which doesn't quite stretch below the word 'Galleries'. There are signs of earlier lettering below this, too. The concept of a furniture gallery is a novel one. The typeface is unusual and has an orange drop shadow.

Further down London Road South there is a former shoe shop:
'STEAD & SIMPSON
FOR FOOTWEAR'
high on the wall on a paler (green?) panel.

and a little further still, an old Barclays Bank branch, proudly signed on each side. The white rectangle with black border is starting to wash down on the brickwork below, but the sign is still remarkably clear despite the bank having long gone. 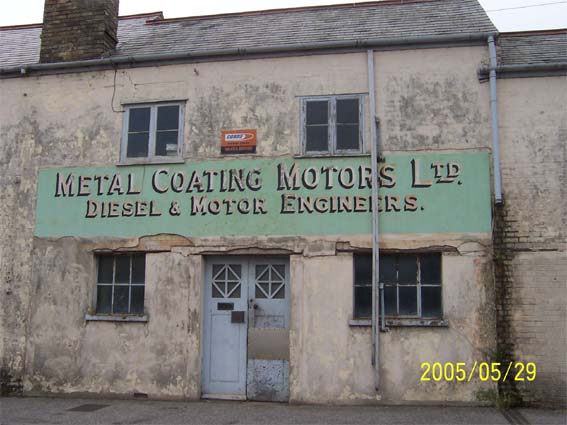 The firm is still in operation, and someone has done a fine paint job on the green background (despite the down pipes), even though the frontage has seen better days. It seems - however unlikely - that the signwriter has returned to earlier lettering and painted round existing characters. The drop-shadow small and large caps have that weathered look to the face of the font which gives a suitably distressed metallic look to the sign. Ten out of ten.