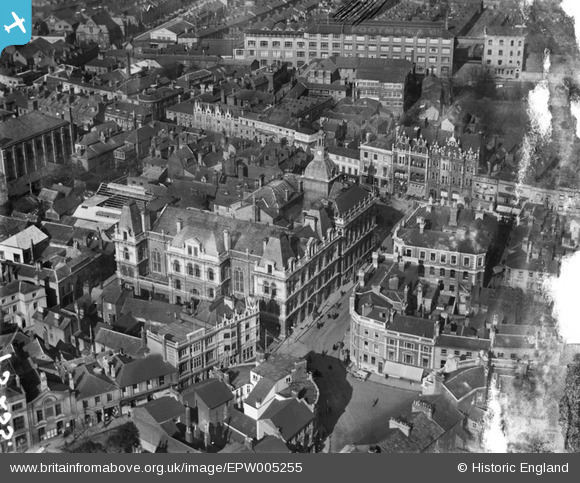 1921 image
The above aerial photograph was taken from a light aircraft in 1921, the angle clearly showing the facade of the Corn Exchange which is seldom appreciated from the ground. The Public Hall (site of today's Primark store) can be seen at the top left of the picture; it was built in 1863 and burnt down in 1948. Following the line of the Public Hall towards the right is Providence Street with the characteristic facade of The Crown & Anchor Hotel in Westgate Street. Across from the top of Providence Street is the mass of the corset factory with 'FOOTMAN & CO.' lettered on the roof. this factory occupies the strip of land between Tower Ramparts and Crown Street (now a car park). To the north is the network of housing between High Street and Neale Street shown on our Ipswich Museum page on a 1902 map. Lloyds Avenue and the Lloyds Arch had yet to be cut through linking Tower Ramparts with Cornhill. Lloyds banking house faces the upper part of Princes Street which runs down to the building we know today as 'Mutual House' on the corner of King Street. The packed-together nature of town centre buildings and structures is relieved only by the Cornhill (not clearly visible here) and the area between Princes Street, Butter Market and Queen Street which today we know as 'Giles Circus', in the foreground.

Police Station, Town Hall, Princes Street
The same 'mistaken identity' as the old Post Office applies to the side entrance of the Town Hall and Corn Exchange itself in the upper mouth of Princes Street, later used as the Ipswich Borough Entertainments Box Office and the Age Concern tea room. Look carefully at the stonework above the door and above the date(1867) you can just make out the words:

On the photograph below, the incised letters having been filled with a compound. The Town Hall was built (and rebuilt in 1867, removing all traces of the original structure) on the site of one of the most ancient ecclesiastic buildings in the town, St Mildred's Chapel, which was probably Anglo-Saxon in origin.

Ipswich Borough Police were formed in 1836 and occupied the Town Hall from 1867. The building was used as a police station from that date until the current police station was erected and opened in June, 1968 at the end of Elm Street near to the site of the long lost Ipswich Castle, (which is believed to have been a wooden structure). An officer of the law in the 19th century wore a beaver skin top hat, blue swallow-tail coat with white duck trousers for summer and blue for winter. In 2006 a blue lamp (a la Dixon of Dock Green) will be added, with a police presence in the Town Hall to give information. The central police station was later moved to Museum Street. Another former police station (1930s?), complete with filled-in lettering, used to stand in the car park of St Helens Court, County Hall, St Helens Street (this part demolished for apartments to be built). 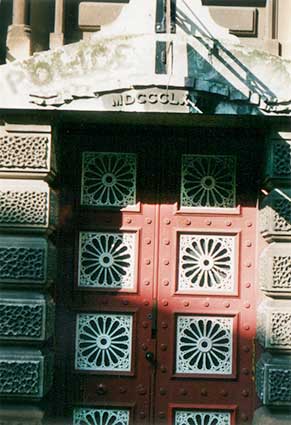 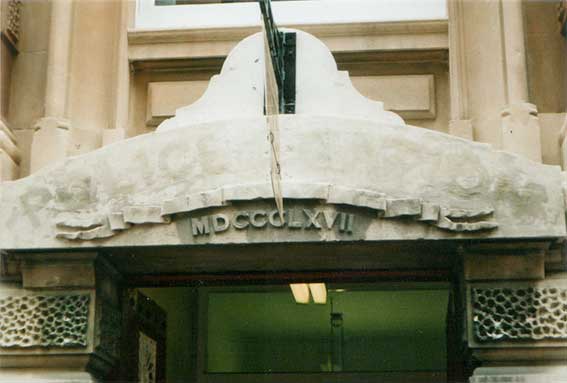 2004 images
This Police Station entrance has appeared in a Giles cartoon – Carl Giles worked a short distance away and is commemorated by the 'Gran' sculpture at the junction of Princes Street and Queen Street nearby – of which a detail is shown below.  This marked the move to Elm Street in 1968. 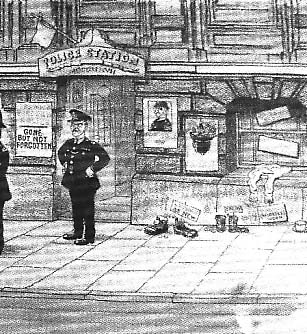 Incidentally, the stretch of the road directly outside this former police station entrance is notable for the fact that it is the only place in Ipswich where the original tramlines have been covered over, rather than ripped up. For a potted history of Ipswich tramways see our page including Tramway Place. 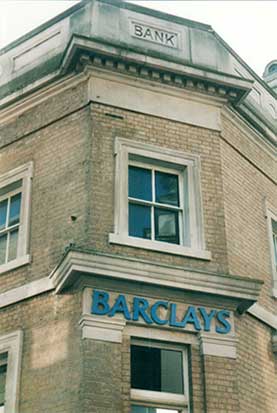 2004 image
Opposite and further down the street stands a typical bank branch with 'BANK' inscribed above the main door on Prince's Street. It has a similarly typical 'BANK' incised in a tablet on the corner with the Thoroughfare; but why is it so terribly high up? 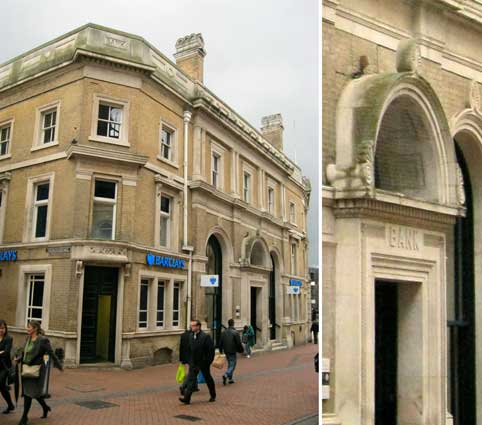 Another high 'Bank' sign has been photographed in the central square in Beccles on the 'out of Ipswich' gallery (an example also on the Felixstowe page). ('Lloyds arch' on the other side of the Cornhill also boasts the relief lettering 'Bank'.) 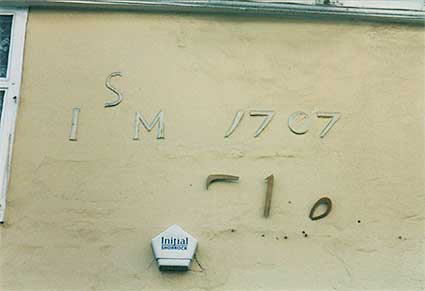 2004 image
Round the corner in King Street stands an ancient tavern. The Swan Inn faces the rear of the Corn Exchange and although the modern lettering which names the pub (see the remnants of 'The' below) has been vandalised, the date lettering and numerals set into the old rendering survive. What does:

stand for? In 1664 Mr John Parker gave Ł2 a year, paid out of the profits of the Swan Inn, to provide coal for the poor people of the parish in which it stands. It was one of the twenty-four inns which existed in Ipswich by 1689. This shows the Swan to be one of the oldest public houses in Ipswich; the date 1707 on the front wall probably signifies one of the many alterations to the building which have been made over the centuries 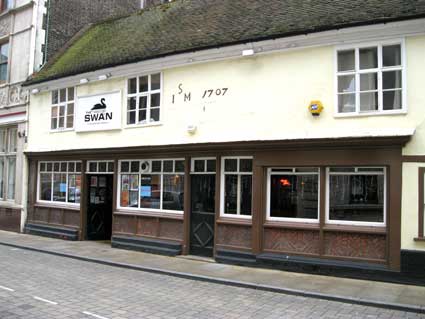 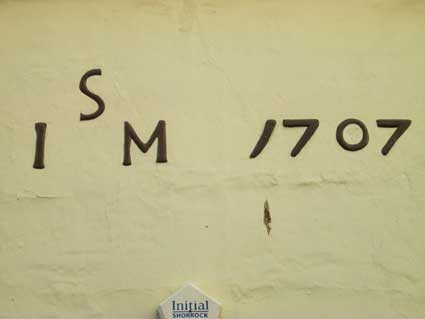 2013 image
Grade II Listed: "A C17 timber-framed and plastered building with C18 and later alterations. The 1st storey bears the monogram S above I M and the date 1767[sic], probably the date it was plastered. 2 storeys. 4 window range, C18 casements, 3-lights with transomes. The window at the west end is a paired window of 6 lights. The centre lights only are hinged, with iron frames. The ground storey has a late C19 bar front of 3 windows and 2 doorways, one doulbe and one single, with rectangular fanlights, united by a moulded wood cornice, probably of earlier date. The windows have framed risers with brick nogging above an earlier stepped brick plinth. At the west end there is a recessed doorway and a wide double-hung sash window with vertical glazing bars, a moulded frame and panelled shutters. The west gable has the ends of some purlins and wall braces visible. Roof tiled, with C19 ornamental crest tiles and a wood eaves cornice." (From British Listed Buildings, see Links).
The Swan Inn also features on a 2017 photograph of Mutual House on the corner with Princes Street (just visible to the left in the above photograph.

[Update 5.1.10: The following information comes from the CAMRA Suffolk real ale guide (see Links): listed in 1844 as the White Swan. The date on the wall, 1707, is believed to be when major alterations were made to the pub (possibly undertaken to reduce the first floor overhang). The building itself probably originates from the previous century. The building exterior is a Listed Grade II whilst the modern interior is based around a central bar. One of the oldest inns in town. A perpetual fine of Ł2 per annum has been imposed on the house since 1664 when the landlord, John Parker gave the money to the parish poor to buy coals on St Thomas day.

King Street itself was named by means of high painted street signs on the Corn Exchange stonework – until it suffered two coats of masonry paint. 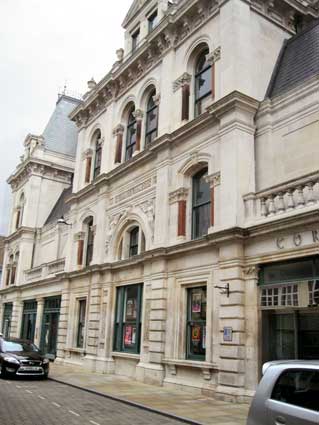 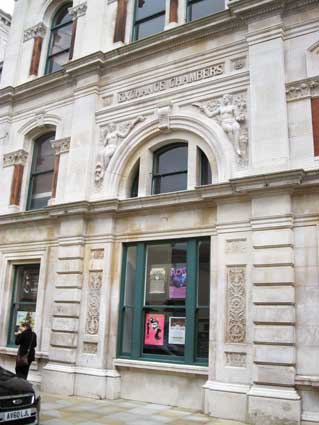 2012 images
Directly opposite and to the left of the modern entrance to the Corn Exchange and Film Theatre is the name 'EXCHANGE CHAMBERS' grandly displayed in relief serif'd capital letters above a semicircular classical arched window with figures of Ceres – incidentally, an 18th Century statue of Ceres, once topping the Corn Exchange roof, is now displayed in weathered condition in the foyer of the Town Hall – and Pomona in the spandrels. 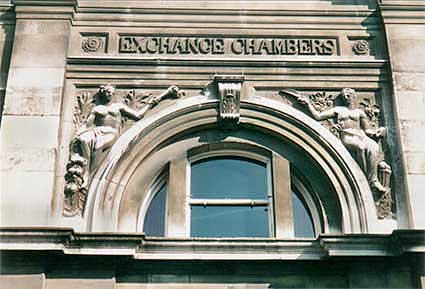 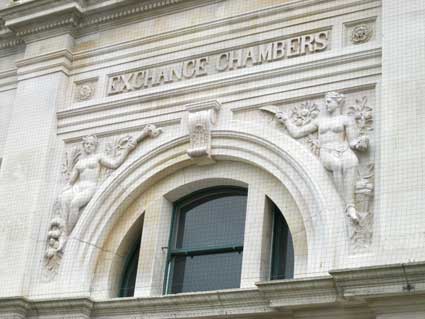 2012
Above left: the rather grimy state in June 2004. Above right: here it is after extensive cleaning and renovation of the exterior in 2012. The architect was Brightwen Binyon, whose name crops up on the Nethaniah almshouses on Luther Road, and the builders were Grimwood & Sons of Sudbury. The sculptor is uncredited. The building was opened in 1882 and is Listed Grade II. We don't suppose many people notice it these days. It's not even above the current main entrance to the Grand Hall and Film Theatre.
Below: an unusual view of the Exchange Chambers lettering and reliefs from the rooftop of Mutual House, the chimneypots of The Swan in the foreground. 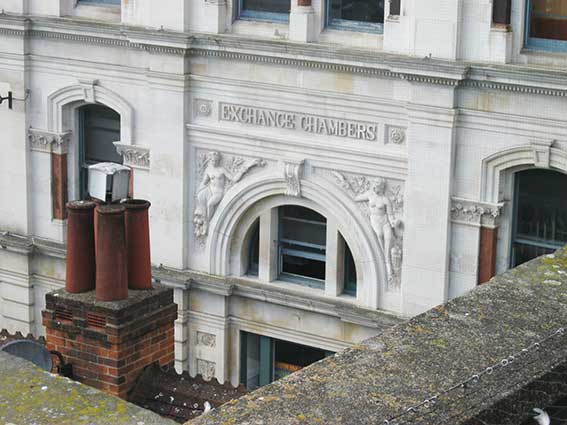 2018 image
The Public sculpture of Norfolk & Suffolk (see Links) tells us:
"Two decorative stone panels frame the semi-circular window with Ceres to left with torch and cornucopia and Pomona with pruning knife and apples to right. The door, to separate offices, is to the left of the main entrance. Ceres was the Roman goddess of crops and Pomona of fruit. Both reflect the building’s twin functions as a corn exchange and fruit and vegetable market, transferred here from Falcon Street in August 1888.
In Mediaeval times the Cornhill became the centre of trade and local government in Ipswich. In 1810 the first Corn Exchange was erected by the Corporation at a cost of Ł33,000. During the 1860s it was becoming crowded on market days and the Council began to consider various alternatives and in 1879 acquired the King Street site at the rear of the Town Hall for Ł12,000. They agreed on the design (one of 15) entered by Brightwen Binyon under the nom-de-plume "North Light". The Corn Exchange was remodeled as a centre for meetings and entertainment in the 1970s, re-opening in 1975."
The fruit and vegetable market remained until 1970 and the last Corn Market was held here on 29 June 1972.

Within The Great Hall
Meanwhile, inside the Corn Exchange at the top of the stairs into the Great Hall, we find this half-round relief which echoes the 'Exchange Chambers' feature above: 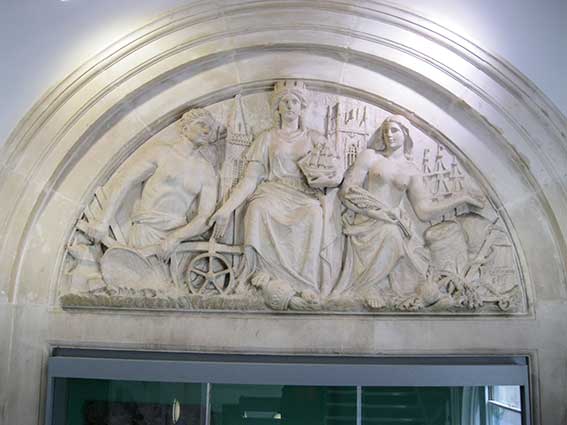 The central figure (of Britannia?) holds a ship in full sail, has a castle for a crown and her right foot rests on an upturned urn carved with the name 'ORWELL' from which the waters of the river flow. She is flanked by a male representing agricultural work and a female (Ceres) representing the harvest. In the background the towers of St Mary-le-Tower Church and St Lawrence Church (you can see the intials 'S' and 'L'), also the masts and rigging of a ship. 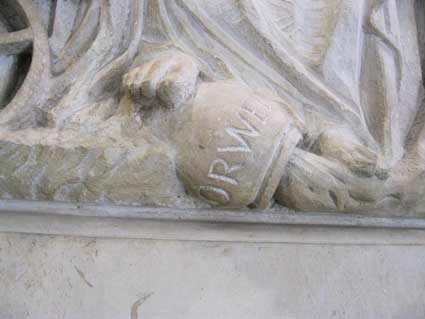 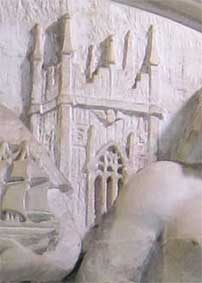 In the glass-fronted cabinet below this relief sculpture is a chunkily baroque carving of the Borough crest in wood with gold highlights: 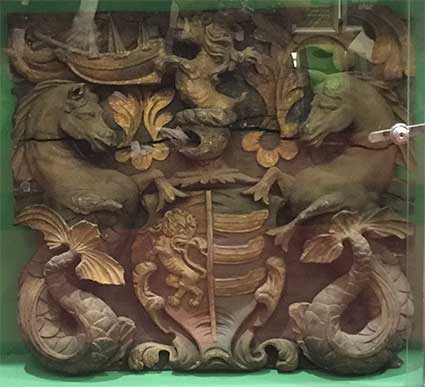 2017 image
See our page on the Borough Coat of Arms for further examples.

Delving even deeper into the main hall, many people miss the monograms in the gold-painted, pierced spandrels: 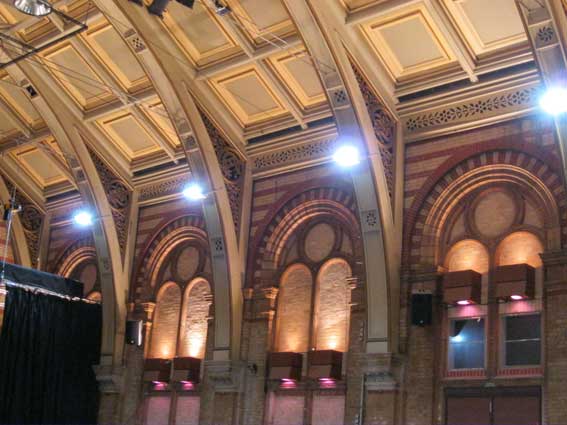 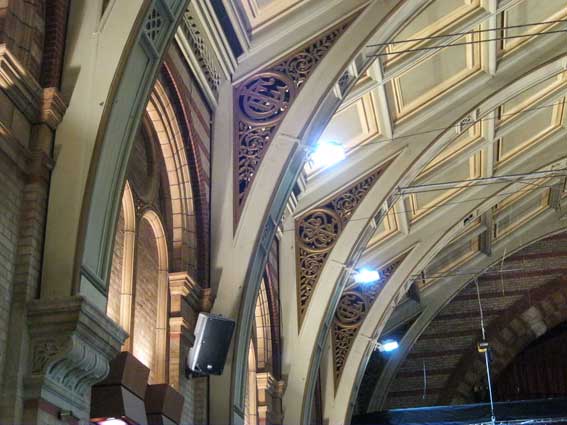 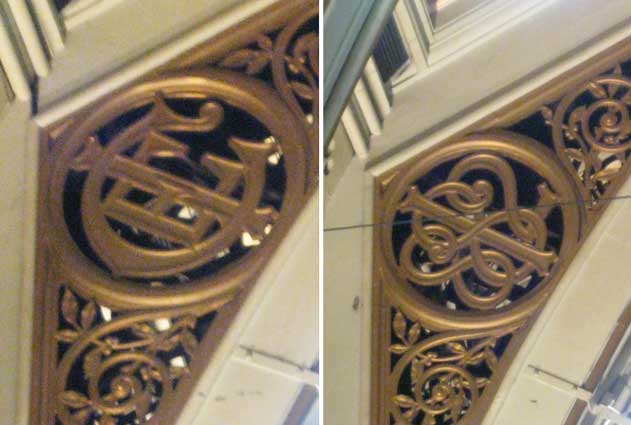 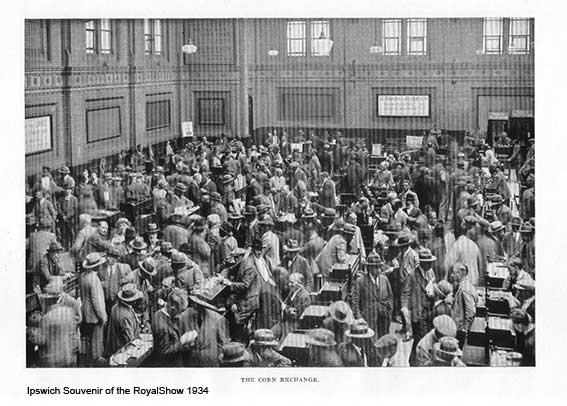 See our Cornhill 1 page for more on this area.