This is a red brick Victorian church of a decent size which many people seem not to have noticed. Its neighbour across Back Hamlet, Holy Trinity Church is somewhat more prominent by dint of its tower. Standing on the corner of Back Hamlet and Long Street the Congregational church is named after the Potteries/dockland area of St Clement's, which in turn is named after the parish served by the Church of St Clement, the Mariners' Church on Star Lane. 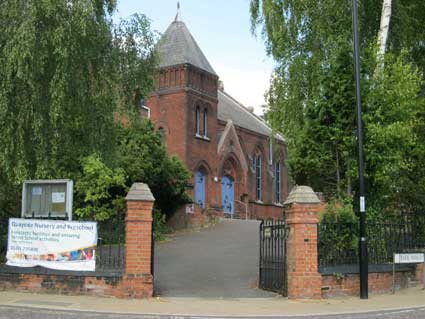 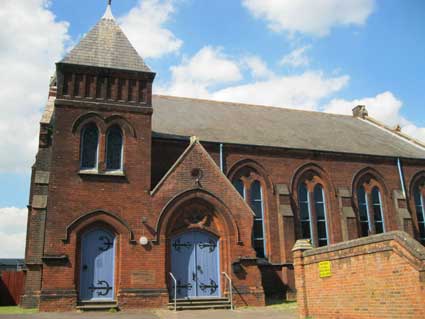 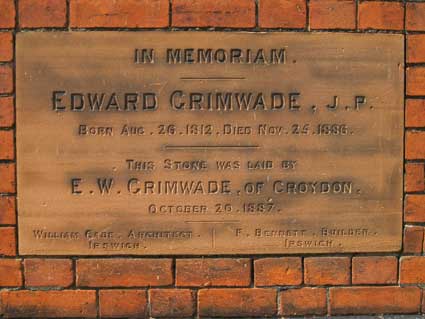 Scroll down for a painted portrait of Edward Grimwade.

Simon's Suffolk Churches (see Links) tells us: "St Clement's Congregational church is associated with one of the most famous Ipswich names, Grimwade. The Grimwades were a prosperous retail family with a large department store on the Cornhill and their fingers in a number of other pies. As is common with the urban capitalist families of East Anglia, they were dissenters - the offices on the top floor of the store were given over to the National Protestant League, who had a proud signage on to the Cornhill. In the 1860s, the Grimwades built the hall on the corner of Fore Hamlet and Back Hamlet, now converted to apartments as the GM Building, but known to an earlier generation of Gippeswykians as Grimwade Memorial Hall as shown on our Coprolite Street page. It was used for assemblies of the congregation, but was soon too small for this purpose, and so in 1887 the grand church directly across the road was built, in the full confidence of late-Victorian non-conformism. The architect was William Eade, and the Hall was built as a memorial to Edward Grimwade, who had died the previous year."
Heritage Open Day, 20 September 2014
We were able to look inside this 'not-open-very-often' church, although it wasn't open for Heritage Open Day, rather for cyclists on the Round Suffolk Churches Ride. 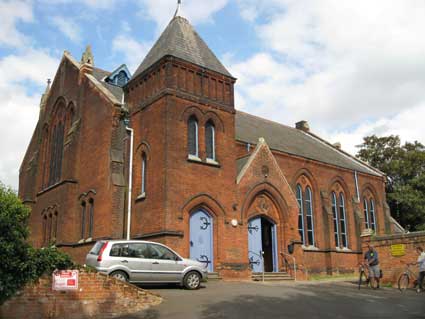 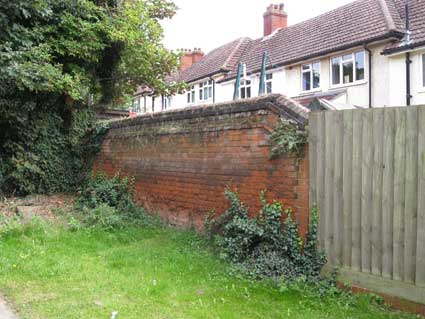 2014 images
At the eastern exterior of the building a substantial and original boundary wall can be seen at the rear of houses on Back Hamlet. Facing it are the structural features shown below. The church's organ stands on the other side of this east wall. 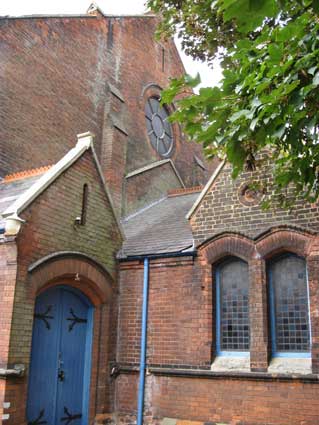 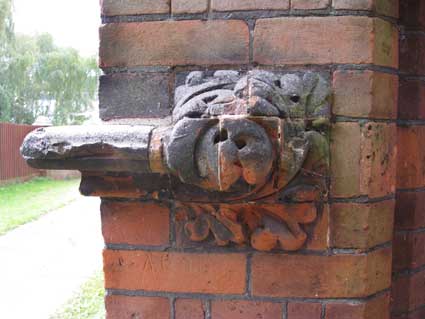 The first thing which strikes the visitor is the large, impressive interior with a simple, Victorian version of a traditional double hammerbeam roof as seen inside St Mary-At-The-Key. The second thing is the 'The Bishop' occupying much of the east wall. This is a reference to the musical instrument built and installed by local organ builders Bishop & Son, who still trade from premises in Bolton Lane. This large church organ is well-known in certain circles – the church sells a CD of music played on it. When we visited we were told that rain had got into the church and on inspection of damage, it was discovered that the electric pump powering the instrument had been installed in a pit, perhaps to ensure minimum leakage of noise into the church. Rainwater had filled the pit and damaged the pump. Only two repairers could be found who could tackle the job and the pump was currently removed. 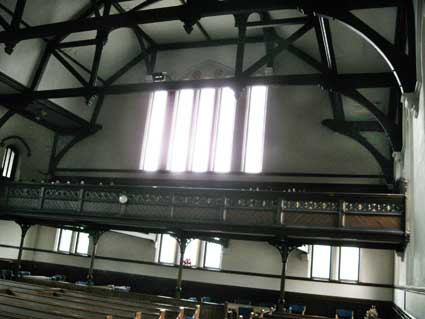 In 2017 we learnt that the original intention was for there to be no organ at all, the human voice being sufficient. This is why the wall features beneath the circular window do not fit in with the shape of the organ pipes. The magnificent woodwork below, including the wide seating was installed at the same time. Being a Congregational church, there is no altar.

At the opposite end of the church is a full-width gallery with raked seating. Access is via the left of the two doors seen on the front elevation, with a staircase in the pointed tower, ensuring that no seating is lost. The only time anyone goes up in the gallery these days is the twice-a-year seasonal adjustment of the clock attached to the decorative front. (Why do we British persist with this arcane activity?) By 2017, the clock had been removed to the body of the church to avoid any accidents in this procedure.

The congregation at the time of our visit was said to be ten people 'on a good day', but at least church members always occupy the same seats, as testified by the two named envelopes placed on the pews. The ground floor pews themselves seem to have been designed for specific families as the vertical divisions between right and left pews are irregular. Brass fittings and troughs at the pew ends take the umbrellas, walking-sticks and (perhaps) swords of attendees before they take their seats. 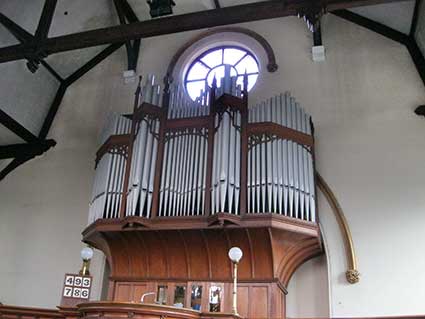 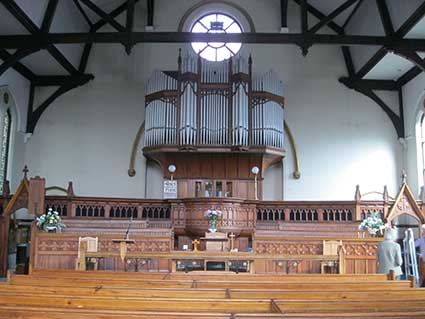 2017 images
There are only two memorial  plaques on the walls of the interior.  The first is brass with features picked out in black and red. 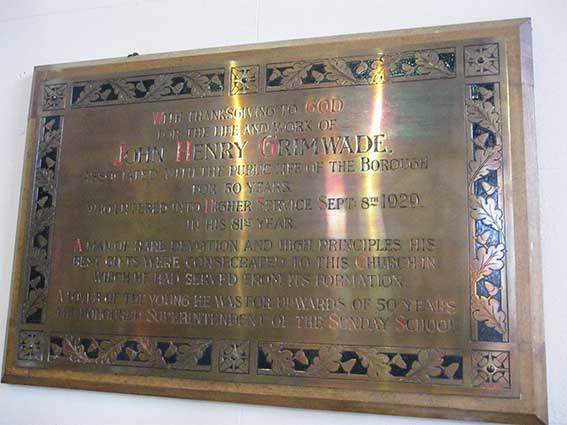 ‘WITH THANKSGIVING TO GOD
FOR THE LIFE AND WORK OF
JOHN HENRY GRIMWADE
ASSOCIATED WITH THE PUBLIC LIFE OF THE BOROUGH
FOR 50 YEARS.
WHO ENTERED INTO HIGHER SERVICE SEPT: 8TH 1929.
IN HIS 81ST YEAR.
A MAN OF RARE DEVOTION AND HIGH PRINCIPLES HIS
BEST GIFTS WERE CONSECRATED TO THIS CHURCH IN
WHICH HE HAD SERVED FROM ITS FORMATION.
A LOVER OF THE YOUNG HE WAS FOR UPWARDS OF 50 YEARS
THE HONOURED SUPERINTENDENT OF THE SUNDAY SCHOOL.’

Scroll down for a photographic portrait of John Henry Grimwade. 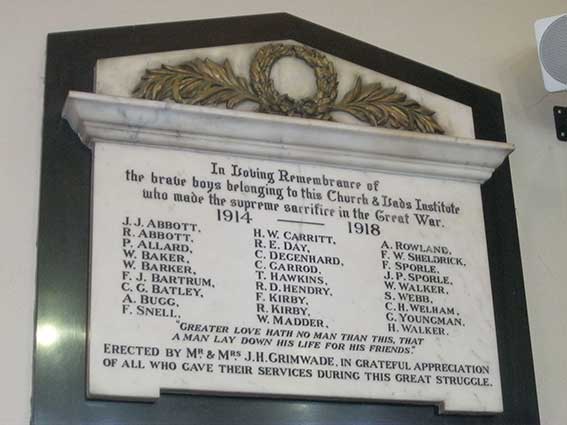 The First World War memorial was the second plaque in the church interior. Owing to the planned conversion of the building into residential apartments, this plaque was removed by the Ipswich Historic Churches Trust and installed at the west end of the north aisle in the Church of St Clement in 2017. It was pointed out that the men commemorated here had probably been at school with those from St Clement, who also died. See the St Clement page for the new position of the plaque.

One assumes that the gallery of the Congregational Church will be dismantled and a mezzanine installed; the existing separate staircase might come in handy for access. Also Bishop & Son might be able to assist with the dismantling, sale and shipping of the organ (probably abroad?), but this is speculation. Someone we met in 2018 on Heritage Open weekend at the Church of St Clement said that their grandfather had been employed as an organ-builder at Bishop & Son and was remembered by today's staff as a good worker, but a bit grumpy; however, his tools are still used in organ work at Bishop's.

The Grimwade 'founding fathers' are further enshrined in paint and photographic emulsion. See the exterior memorial tablet for Edward and the interior brass plaque for John Henry, both shown above. 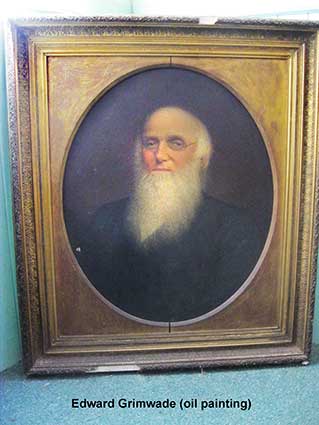 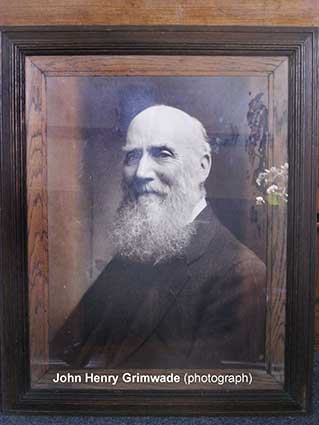 No reproduction of text or images without express written permission