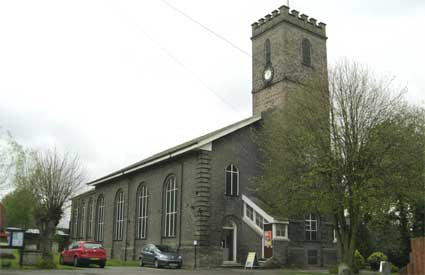 2012 images
Holy Trinity Church and its only visible lettering (on the church hall); both buildings are Listed Grade II. There is more on this church and its connection to Trinity Lodge and Trinity Vicarage on our Rosehill case study. 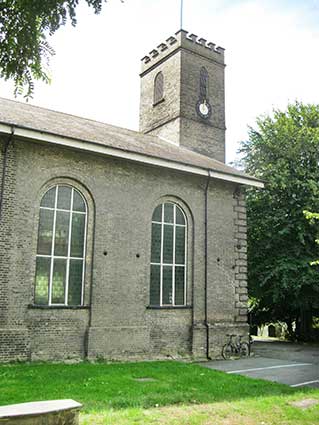 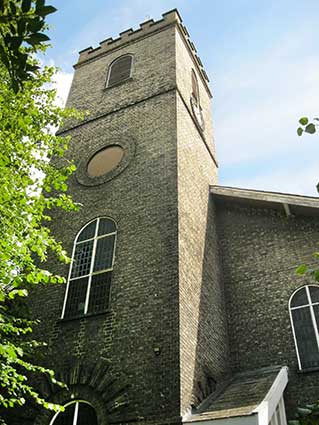 2018 images
See our page on Public clocks in Ipswich for a 2018 view of the church tower and its clock. 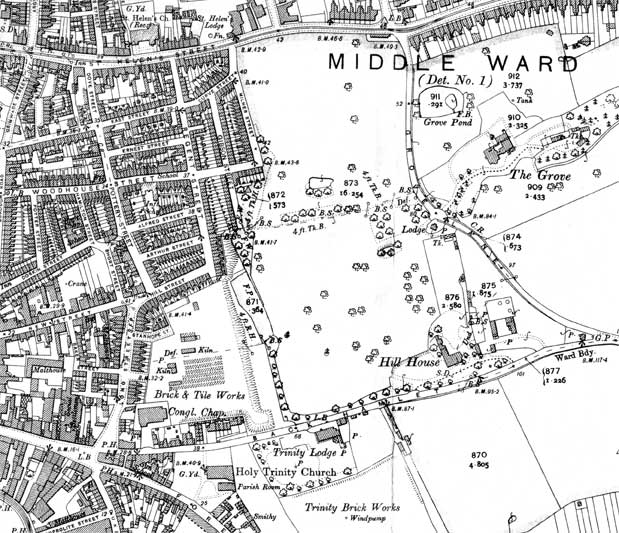 Map showing Holy Trinity, 1902
In 1902, we see that Holy Trinity Church and the nearby Trinity Lodge had the Trinity Brick Works down the hill from them and open fields to the east. Across from the Lodge was the parkland belonging to the Byles family at Hill House which would become Alexandra Park a year later. In contrast, we see to the west the mass of roads and housing of the Potteries; see our Courts & yards page for more. South of St Helens Street we can identify Grimwade Street, Borough Road, Dove Street, Regent Street, Milner Street, Gibson Street, East Street and Curve Street (nowadays all known as 'Rope Walk'), Ernest Street, Woodhouse Street, Potter Street, Hamilton Street, Pottery Street, Alfred Street, Stanhope Street, Arthur Street, Dorkin Street, New Street, Long Street and Baker Street.

Holy Trinity Church was built in 1835 as a Chapel of Ease to St Clement Church, and dedicated to the Holy Trinity by the Reverend John Thomas Nottidge, M.A., [probably the origin of Nottidge Road in Ipswich] Patron and Rector of St. Clement's and St. Helen's churches. He erected the church at his own expense, at a cost of £2,400. The land was previously used as a ropewalk. The consecration was carried out by the Bishop of Sodor [shades of Thomas The Tank Engine?] and Man acting for the Bishop of Norwich. Holy Trinity was the first church in Ipswich to be built since the Reformation and this was during the reign of King William IV who was the final Hanoverian King (and called the 'sailor king'). The Seals of Trinity Priory were set in the East Window (see below).

Scroll down for the full Listing text. 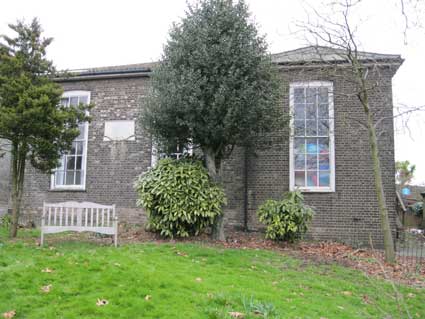 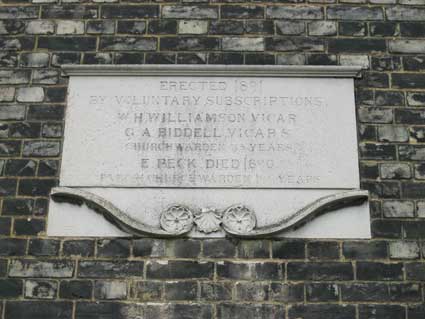 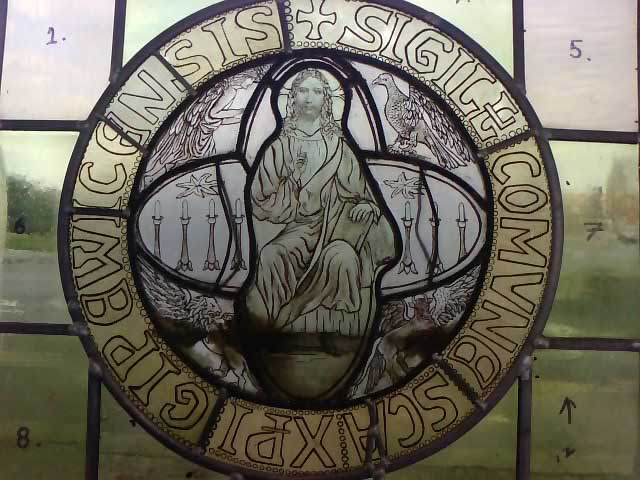 The first seal represents Christ seated on a throne, the right hand raised in blessing, the left resting on the Holy Book. He is seated in the centre of seven candlesticks, surmounted by an estoile (or star), symbolic of the Father and Holy Ghost. In each corner are the mystic emblems of the four evangelists: Mathew, Mark, Luke and John. The text around the seal reads 'Seal of Christ Church Ipswich'.
As far as we can make out this is: 'SIGILE . COMMUNE . SCA . XPI . GIPEWICENSIS', although some of the characters are curious. 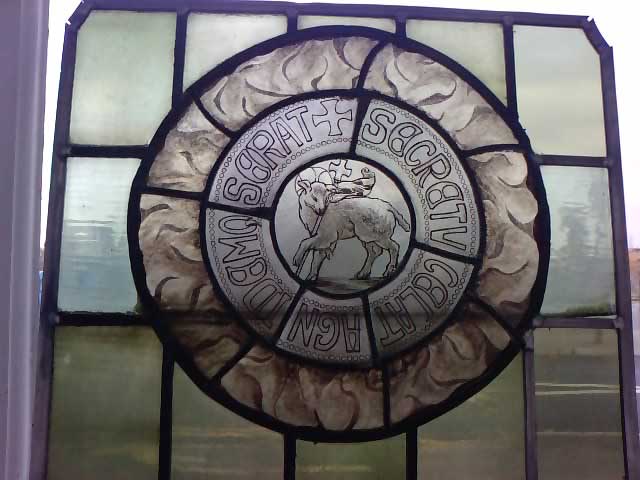 The second seal – the Secretum or 'private seal' – depicts the Lamb with the standard of the Cross, and the text around it reads 'The Lamb conceals the mystery, and locks up the same'.
It reads: 'SECRETU . CELAT . AGN . IDEMO [Q?] . SERAT'
In the early part of the 16th century the Priory was dissolved, and the church pulled down. After a gap of about three hundred years, another church of Holy Trinity was built here in Ipswich, and these medallions have been placed here as a reminder of its predecessor of the Middle Ages. In 2009 these windows were repaired and cleaned. [Information taken from: http://www.ipswichwaterfrontchurches.co.uk/holytrinitychurchipswich.html]
[UPDATE 11.12.2013: 'Hello Borin....Thought you might be interested in the attached images. These were rebuilt at our stained glass studio a few years back. They are fitted to the west window [behind the font] in Trinity Church , Back Hamlet. They were originally fitted to the Abbey, that stood prior to Christchurch mansion being built! Hope they are of interest re: the Ipswich seal. Regards, Ian Davies. / Danielle Hopkinson.'] 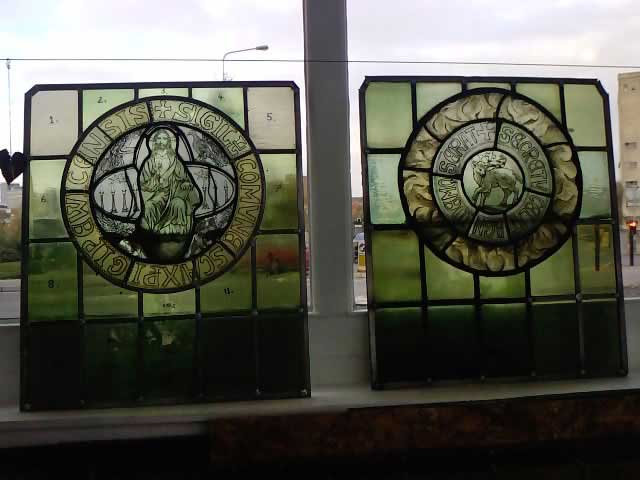 Our thanks to Ian and Danielle for what must be one of the earliest examples of public lettering in Ipswich. The church of The Holy Trinity Priory, which existed from 1133 until the Reformation of 1537, was indeed on or near the site of Christchurch Mansion – the sources are not precise on the location. If the seals were adopted in the 13th century and the Priory church was dissolved around 1537, that would suggest that it was stripped of anything of value for sale or reuse (e.g. building materials) before complete demolition. Catholic recussants were known to cover up or hide items which Reformation puritans would have considered idolatrous and want to destroy. But if the glass is really early and from that church, it would mean that somehow the small glass circles were stored somewhere, probably in secret,  for safe-keeping until the building of Holy Trinity in Back Hamlet in 1835, three hundred years later. 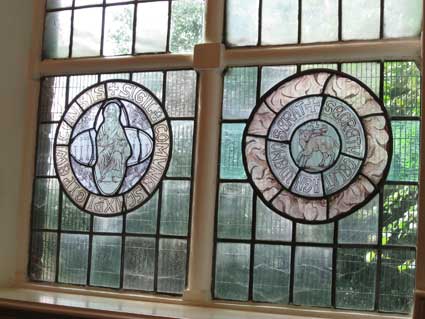 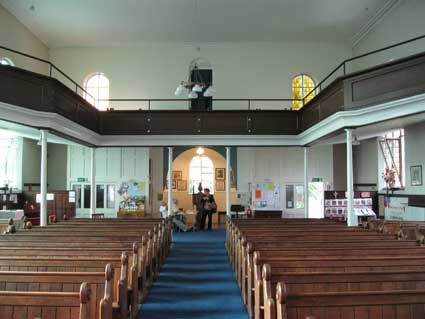 The Trinity seals set into the west window (central ground floor window with round top) of Holy Trinity Church on Heritage Open Weekend, 2014. 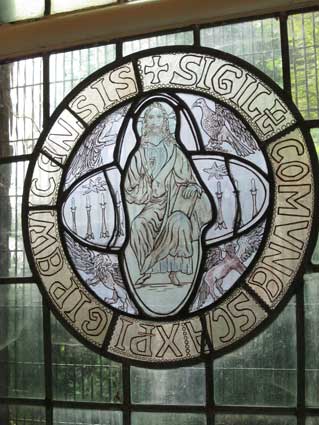 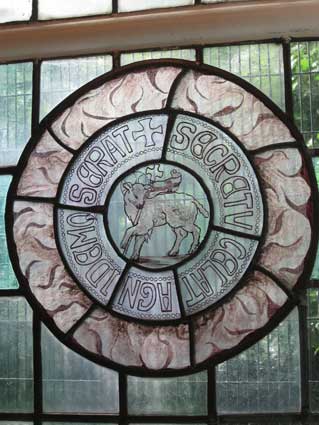 Another interesting, but far more recent, window shows a portrait of a previous vicar of the church within a laurel wreath. 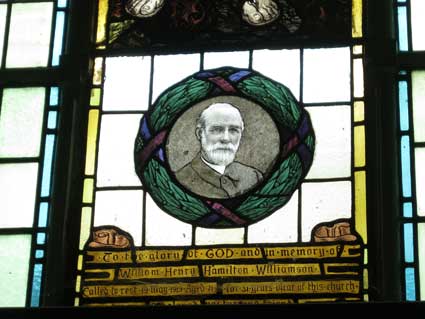 'To the glory of GOD and in memory of
William Henry Hamilton Williamson.
Called to rest 19 May 1919, Aged 71, for 31 years vicar of this church.
A beloved pastor and friend.'


The cast iron plaques
A late arrival on this page is a pair of cast iron plaques on the outer western wall of Holy Trinity Church, at the foot of the tower. (The circular seals are visible in the round-topped window.) The transcription, somewhat surprising – a plaque commenting on another plaque – is below. 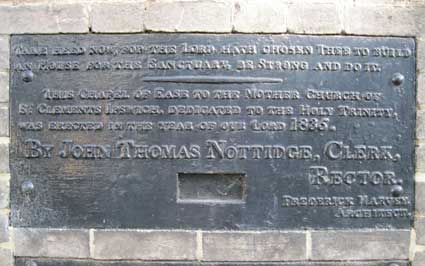 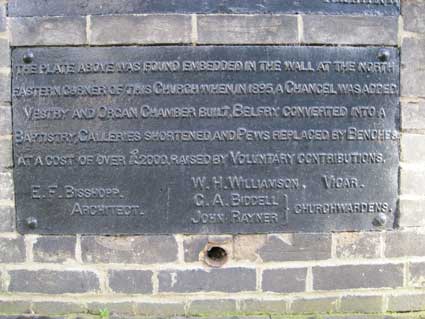 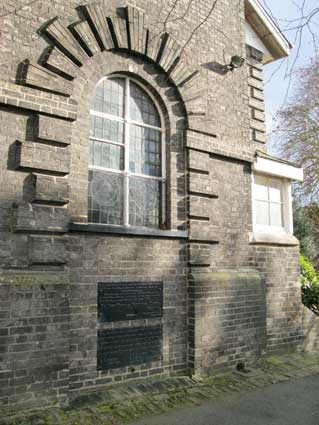 'TAKE HEED NOW, FOR THE LORD HATH CHOSEN THEE TO BUILD
AN HOUSE FOR THE SANCTUARY, BE STRONG AND DO IT.
---------------
THIS CHAPEL OF EASE TO THE MOTHER CHURCH OF
ST. CLEMENTS IPSWICH, DEDICATED TO THE HOLY TRINITY,
WAS ERECTED IN THE YEAR OF OUR LORD, 1835.
BY JOHN THOMAS NOTTIDGE, CLERK,
RECTOR.
FREDERICK HARVEY,
ARCHITECT.'

'THE PLATE ABOVE WAS FOUND EMBEDDED IN THE WALL AT THE NORTH
EASTERN CORNER OF THIS CHURCH WHEN, IN 1895, A CHANCEL WAS ADDED
VESTRY AND ORGAN CHAMBER BUILT, BELFRY CONVERTED INTO A
BAPTISTRY, GALLERIES SHORTENED, AND PEWS REPLACED BY BENCHES
AT A COST OF OVER £2000, RAISED BY VOLUNTARY CONTRIBUTIONS.

1835 by Frederick Harvey. Restoration in 1894-5 by E F Bisshopp when the chancel was added.

EXTERIOR: The original church consists of an unaisled brick rectangle with a W tower. Either side of this are sloping stairways, added apparently in 1894-5, to give access to the gallery. They have a timber superstructure on a brick base. The tower is tall, plain and unbuttressed. At ground level it has a round arched window with a Gibbs-style surround. The belfry windows are single round-headed lights and the top of the tower is crowned by an embattled parapet. The nave has four bays and is lit by large round-headed windows placed in shallow recesses: they have simple iron window frames with two mullions and two transoms creating a rectangular grid. The roof, of low pitch, overhangs the walls considerably. The corners of the nave are rusticated. At the E end the chancel is an addition of 1894-5 but closely follows the style of the nave, even to the use of similar windows (although narrower and with only one mullion). There are no parapets or clerestory on the nave and chancel.

INTERIOR: The walls are plastered and painted. The interior is the product of two phases, some sixty years apart. The footprint of the 1830s nave is still clear and this space is covered by its original flat ceiling pierced by three circular ventilators. In the 1890s the E parts of the church were built in an (internally) ornate baroque style which contrasts with the plainness of the nave. There are three round arches from the nave, the N one to a chapel, the wider and taller central one to the chancel, and the S one to an organ chamber. All have raised voussoirs. The chancel arch is the most lavishly treated and has pairs of detached columns in the responds and above these a deep, raised entablature. The arches to the chapel and the organ chamber are also given rich baroque treatment, including coffering on the soffits of the arches. Over the chancel there is a segmental-shaped ceiling divided into a series of square panels, each ornamented with a rose-like feature in the centre (painted in the 1960s). The ceiling over the chapel is flat and has plain square panels. At the E end the chancel has wall-panelling with a decorative frieze over.

PRINCIPAL FIXTURES: Little survives from the 1830s church although an iron plaque mounted outside on the W face of the tower records the building of the church in 1835 and names the architect. The Commandment boards in the base of the tower are probably also of the 1830s and appear to be made of iron slabs. The N, S and W galleries remain although reduced in length in their E parts in the 1890s. A second iron tablet on the exterior of the tower records the work of this time, names the architect and explains what was done The seating in the galleries was replaced along with that in the body of the nave at the 1894-5 restoration. This seating has pews with shaped ends: they still retain the pew numbers in small roundels. The stalls are quite plain and have panelled frontals. The pulpit is a fine C17-style piece of wine-glass design. The reredos in the chapel is an early C20 piece depicting the Supper at Emmaus. There are a number of simple wall tablets including a First World War memorial on the S wall. At the E end there is a fine, colourful stained glass window with themes from the Book of Revelation installed as a First World War memorial in 1920 and designed and made by L. Pownall of Falmouth, the brother of the vicar at that time.

ASSOCIATED FEATURES: The church hall to the SE, 1891, in a style that blends with the church, is separately listed (ref. 427443). Two brick gate piers N of the church have stone cappings and a curved iron arch spanning the two piers.

HISTORY: Holy Trinity was built and dedicated in 1835 as a chapel of ease to St Clement's church in Ipswich. It was the first church to be built in Ipswich since the Reformation and was erected at the expense of the Rev. John Thomas Nottidge who was patron and rector of St Clement's. Holy Trinity and St Clement's were made separate parishes in 1838. At that time Holy Trinity had some 750 seats, 250 of them being free. The designer, Frederick Harvey (1779-1861) was an architect and builder at Ipswich. Apart from Holy Trinity church, he designed Rushmere vicarage, Suffolk, 1827; St Helen with St Clement's school, Ipswich, 1843, and repaired and partly rebuilt the almshouses in High street, Needham Market, 1836. In 1833 he exhibited a design for a Gothic cast-iron aqueduct at the Royal Academy.

Developments took place in the 1890s with the building of a church hall in 1891 and a major restoration of the church in 1894-5. This involved an eastward extension to form the present chancel, N chapel and organ chamber/vestry, reseating and shortening the galleries. The work cost over £2000 and the architect was Edward Fernley Bisshopp (1850-1921), an Ipswich-based architect. He had been articled to Frederick Barnes, another Ipswich architect and went into partnership with him. He was architect and diocesan surveyor for Norwich from 1885.

REASONS FOR DESIGNATION: Holy Trinity church, Ipswich, is designated at Grade II for the following principal reasons: * It is a late Georgian brick church in a plain classical style. To this was added in the 1890s a new E end which is very sympathetic to the Georgian work externally and which has a rich baroque interior. * It retains fixtures both from the 1830s and 1890s.