Temple of Remembrance, the crematorium and cemeteries 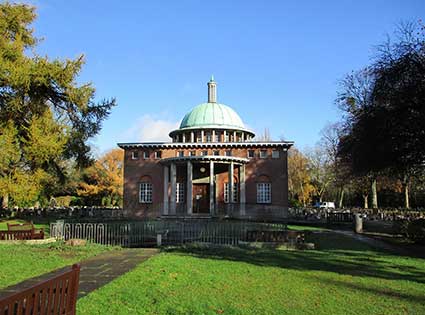 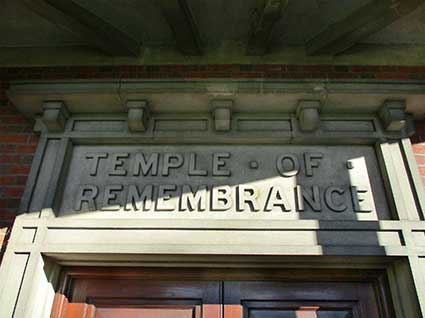 is lettered in relief, sans-serif capitals above the main entrance beneath the curved portico. Although shaded, this is a large and prominent sign on an interesting 1930s building by local architect Sherman (see our Northgate Street page for a liitle more on Sherman).

The Temple of Remembrance is Listed Grade II:
'Temple of Remembrance. 1935. Designed by J A Sherman. Red brick with ashlar dressings and a copper dome. 2 storey. Square plan. Main facade has central projecting curved portico with slender stone columns supporting a flat roof. central double panel doors flanked by two casement windows on either side, all with blind arched heads. Above 5 small square windows over the portico flanked by 3 similar windows on either side.  The remaining 3 facades are similar. Each with 3 tall and narrow central windows to each floor, the lower row of windows have blind arched heads. Either side on both floors are rows of 3 square windows with raised brick surrounds. The central dome has 24 short stone columns and 24 small casements supporting a shallow copper dome with an elongated circular cupola with copper finial. Interior has a series of marble lined rooms on the ground floor linked by segmental arches. These rooms are lined with remembrance plaques to those who have been cremated. It includes a foyer with memorial tablets to those who died in the war.'

Ipswich Corporation's Burial Board laid out the large cemetery (now known as 'The Old Cemetery') with both formal and natural elelments at the end of Cemetery Road in 1855. It was extended across Belvedere Road and Cemetery Lane to form 'New Cemetery' between 1921 and 1928 to include a crematorium, advertised as being the only one at the time between Leicester and London.
'The Burial Board already owned the land to the north of the cemetery, which they leased to a football club, and in 1901 members of the Board committee visited the renowned plant nursery Notcutts of Woodbridge to select trees for planting the perimeter of the area. The work was carried out by Notcutts who subsequently advised on the plan and planting for an extension to the east of the main cemetery, and also on the north extension, at which time the area to the south became known as 'Old Cemetery'. Much of the planting was carried out well in advance of New Cemetery opening in 1921. In 1928 a new chapel and crematorium were added here, to designs by W.J.A. Sherman, architect and in July of that year the Board were advertising it as the only crematorium between Leicester and London. Ipswich Borough Council Parks subcommittee took control of the cemeteries in 1946 and in 1969 a further extension was added, again to the north, this area being given the name of the Lawn Garden. The site remains (2001) a working cemetery, in public ownership. ... In New Cemetery the principal buildings are the Crematorium and the Temple of Remembrance. The Crematorium is built of red brick with ashlar dressings and was erected by the Burial Board in 1928 to the designs of the architect W J A Sherman. It forms the focal point of the main drives which extend from it to the north-east and south-west.' [Extracts from the Listing text]
The Old and New Cemeteries are Listed Grade II*.

Meanwhile in the more frequently used Crematorium chapel, also by Sherman, we find a rather good Ipswich Borough coat of arms: compare with other versions. This relief is mounted on the wall covered by the flat roof at the entrance to the crematorium chapel. 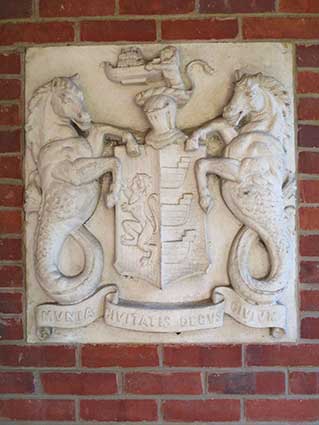 Field of Honour
This military burial ground lies towards the south of the old Victorian cemetery, not far from the Cemetery Road entrance. 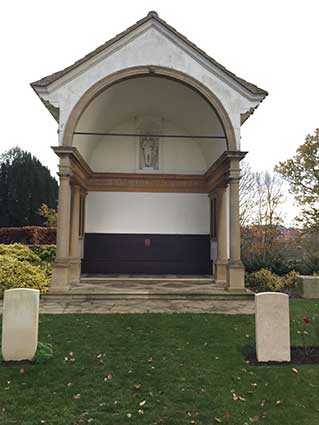 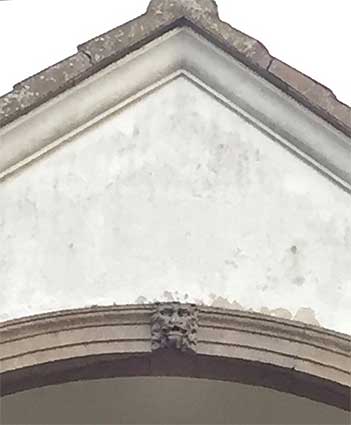 2020 images
At the top of the narrow romanesque arch is a lion's head. Below: the timber fieze bears the inscription:

'THEIR NAME LIVETH FOR EVER MORE'

with the serif'd capitals separated by 'decimal points'. The figure of a knight in armour holding his shield is set in a niche above. 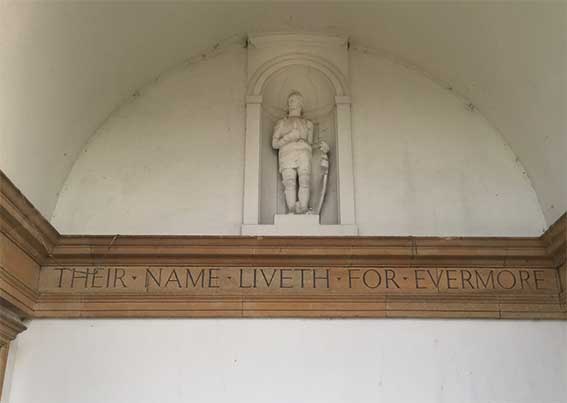 The headstone just in front of the shelter (the back of which is shown in the first photograph on the right) is shown here. It is unusual in that it is inscribed at the top:

On the ring of the crest:

which, perhaps surprisingly, means 'Badge of the Rock of Gibraltar' round the coat of arms of Gibraltar; and on the scroll: 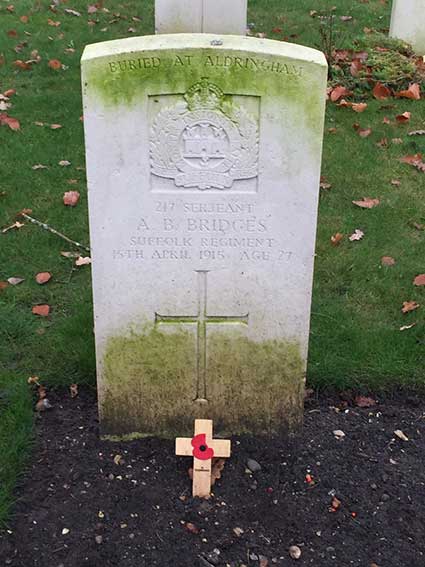 So Sergeant (here spelt with a 'j') A.B. Bridges of The Suffolk Regiment was, presumably, killed on Gibraltar in the First World War, his body was repatriated and buried at Aldringham in Suffolk – it can be assumed that it was in the cemetery of the parish church – and is commemorated on this stone in the Field of Honour at Ipswich Old Cemetery.

This design of commemorative military headstone shown here is of interest in itself. It is the work of Macdonald (Max) Gill (1884-1947), brother of letter-carver and sculptor Eric Gill. In January, 1918 Max joined the Imperial War Graves Commission Headstone Committee. As lettering adviser, he was tasked with designing the alphabet and regimental badges for the military headstone. His designs are still used today and is instantly recognisable, whether in a small English churchyard or in a large cemetery on the Somme. Some examples are clustered together in the 'New Cemetery' to the north.