Enthroned and gesticulating on an Ipswich street only yards from the place in which he grew up (now demolished and replaced by first The Hippodrome Theatre and today by Ensor's Cardinal House), Cardinal Thomas Wolsey is celebrated. Our second photograph shows him with Curson Lodge, the lodgings belonging to Curson House, in the background which belonged to his contemporary, Lord Curson. The sculpture can be found on St Peters Street, close to the junction with Silent Street. 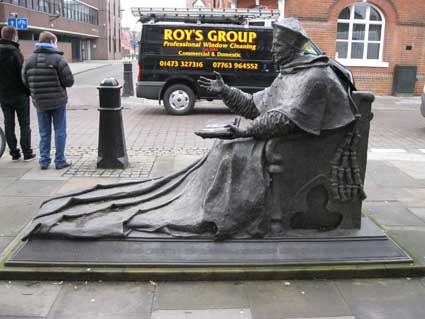 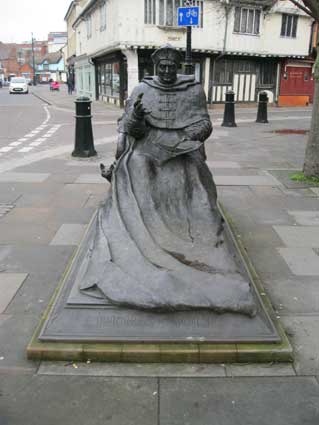 Public art is a curious beast. Is it a good idea to erect works of art in public spaces to add interest, historical resonances, beauty into our towns and cities? Undoubtedly, yes. However, if you ask some with strong opinions, it is almost always: 'Yes, but not that one.' Whatever you put up, someone will take exception to it, hate it, rage against this waste of money, wish that it was something different, on any other subject by any other artist, or worst of all that it wasn't there at all. Such is the case with the nearby Prince Obolensky sculpture on Cromwell Square (financed, it is said by oligarch billionaire Roman Abramovich, so boo! Hisss!) and with the statue of Cardinal Thomas Wolsey in St Peter's Street. Actually, it is rather good. 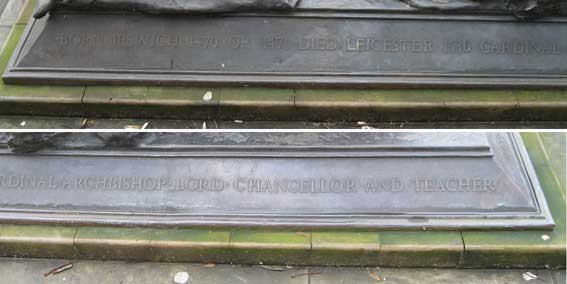 The relief capitals running around the plinth of this unusual, seated low-lying figure read (from the narrow section at Wolsey's feet): 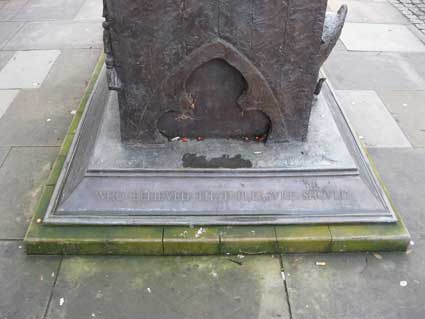 2014 images
Each word is separated from the next by a point. Wolsey is accompanied by a cat, its head just visible to the lower left of the figure in the second of our photographs. 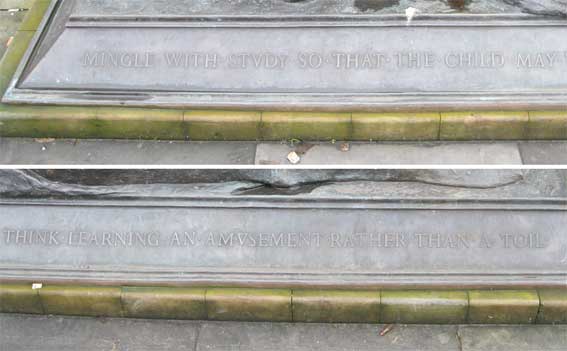 From the BBC Suffolk news site (29 June 2011):-
'A bronze statue of Cardinal Thomas Wolsey has been unveiled in Ipswich town centre. David Annand was commissioned to make the £90,000 sculpture celebrating one of Suffolk's most famous sons. "The reaction from the crowd was very moving and I think it'll be fine in this setting," he said. The artwork is at the junction of Silent Street and St Peter's Street near to the spot where Wolsey is believed to have lived. A crowd of about 300 people were there for the ceremony, which featured an actor dressed as Wolsey and Tudor musicians. Mr Annand said: "We knew it was a wonderful setting because it has Tudor houses around it that Wolsey would have known. "I think it would have been vulgar if it had been any bigger. [It is 10% larger than life-size.]
"It had been nerve-wracking but the comments I heard were very reassuring and I'm very happy with the end result." Dr John Blatchly, project chairman of patrons, said: "The unveilers gasped as we pulled the cloth off and it's a very approachable figure. "It's so very much better than I first imagined it would be when we first thought of the project 12 years ago. "At every step of the way we've had an agreement on the detail and it's got better and better." The Right Reverend Nigel Stock, Bishop of St Edmundsbury & Ipswich, who was also at the unveiling, said: "I saw a drawing of it, then a model, but to see the actual statue exceeds expectations. "It's a lovely bit of work and it's great that it's right here for the people of Ipswich to see. "It's not just any old statue. It's contemporary and it'll make you stop and look." ' 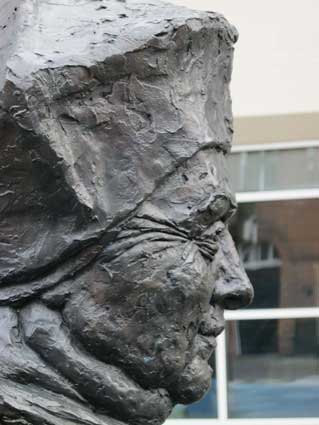 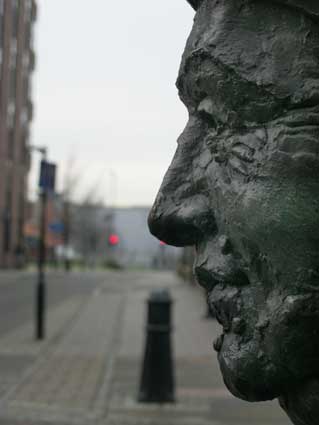 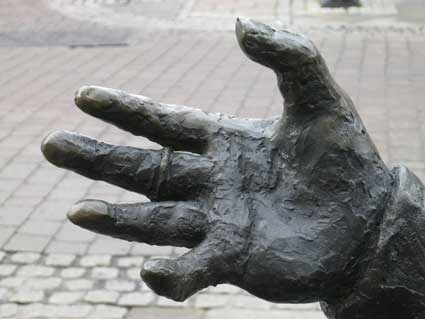 The Public Sculpture of Norfolk & Suffolk website (see Links) gives what might be called a mixed review: "The statue is set on a wide stretch of pavement under lime trees (suggesting future maintenance problems) not far from the Gateway of Wolsey’s College of St Mary. The cardinal sits on a chair decorated with gothic arches and stretches his right hand, inviting the spectator to share the book held up in his left. His cardinal’s robes are spread out uncomfortably in front of him, while his hat hangs over the back of the chair and a cat peers round one of its legs.
The gesture and the inclusion of the book respond to the thinking behind the commission as set out by Dr John Blatchly, a distinguished former headmaster of Ipswich School, responsible for the public appeal: “The statue aims to highlight Wolsey's reputation as a great educator, who was 500 years ahead of his time; one of Wolsey's dreams was to establish a Cardinal College in Ipswich but all that can be seen of his legacy now is Wolsey's Gate and St Peter's Church.’ Dr Blatchly ended by quoting the passage from Wolsey inscribed around two sides of the base. The sculpture suffers from Annand’s indecision between faithful representation of Wolsey’s features and robes and a more abstract handling."

We have much more on Wolsey's College.