When, in the early 1960s, Ipswich was earmarked by central government to act as a resettlement area for populations displaced from the East End of London, it spurred a major shift in policy on civil engineering and building. The fact that the government policy shifted again after the building of the Greyfriars complex (1964-66) meant that the massive housing estates in south-west Ipswich were never built and the influx of Eastenders never arrived – being diverted to Haverhill,  Sudbury and Thetford. In addition to the Ipswich Borough Council attempt to shift the town's centre to a new, car-orientated, modernist shopping and leisure centre at Greyfriars, much else changed. 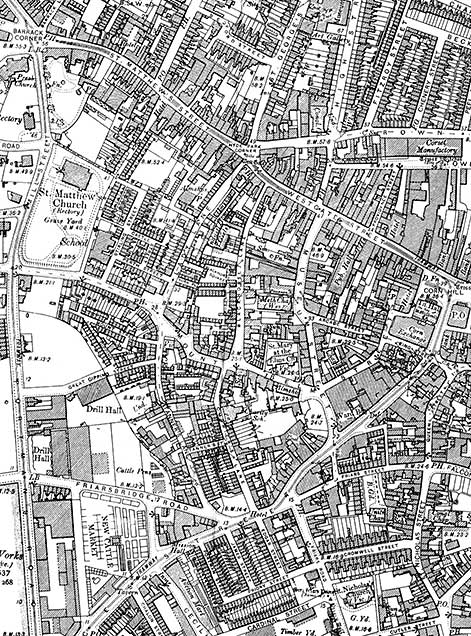 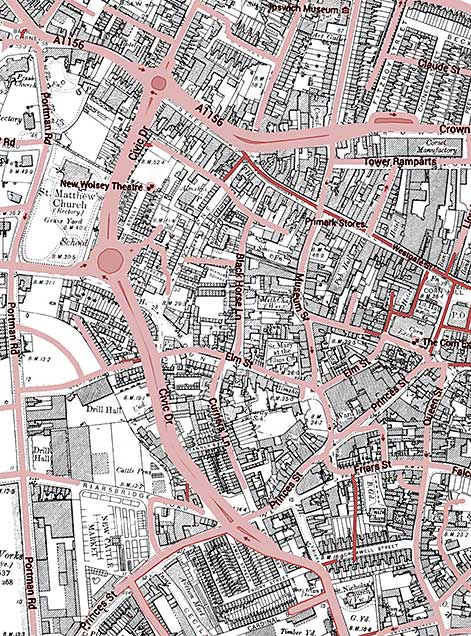 The 1902 map of this area shows a very different street layout to that we see today, as can be seen by overlaying the modern streets in pink, above. See also our page on Black Horse Lane.

The main changes in road routes from St Matthews Street down to Princes Street, turning left into the new dual carriageway of Cromwell Street. At this point, protesters halted the bulldozers which were about to push this new road through ancient buildings in St Nicholas Street, Silent Street, Lower Brook Street, Foundation Street and Fore Street. The last of these was, of course, eventually cut through by the Star Lane 'Eastern Gyratory' traffic system in the 1980s. Those protesters, concerned at the wholesale demolition of the architectural heritage of this ancient town, soon formed The Ipswich Society (see Links) in 1960. Many of the roads and buildings demolished were of poor, working class dwellings, run-down beer houses and old industrial buildings. The hill on which Civic Centre was built had been an area of the town called 'The Mount' and the lanes dropping south from St Matthews Street were Church Lane and Lady Lane. Below Handford Road and Mount Street (running east-west), Lady Lane led down to Tanners Lane which eventually joined  Friars Bridge Road and Princes Street. See our Friars Bridge Road page for a 1902 map of the area. The new dual carriageway running from the southern end of Berners Street down to the Greyfriars site more or less followed the lines of Church Lane and Tanners Lane. It was called Civic Drive to reflect its proximity to the group of buildings around the new Civic Centre, law courts and police station block on Elm Street. The reshaping of this part of Ipswich was radical.

See also Lost Ipswich trade signs for Thomas Seckford's 'Great Place' in Westgate Street, destroyed during the cutting-through of Museum Street in the 1840s.
See our 'Ipswich Tomorrow' page for more about the Greyfriars and Willis developments, the Greyfriars timeline and a set of 1968 photographs of the newly built Civic Drive and Greyfriars area. 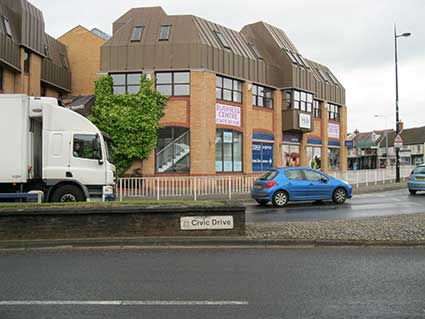 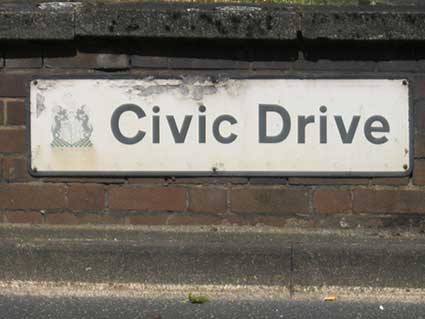 The little-noticed road signs on the brick central reservation on the upper part of Civic Drive are remarkable survivors of those early days. It is probable that their 'difficult' positioning and relatively small size accounts for their survival into the 21st century when so many other street nameplates have been replaced or updated. 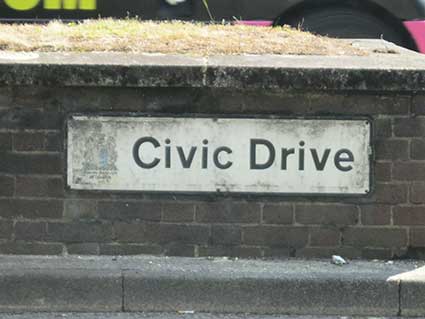 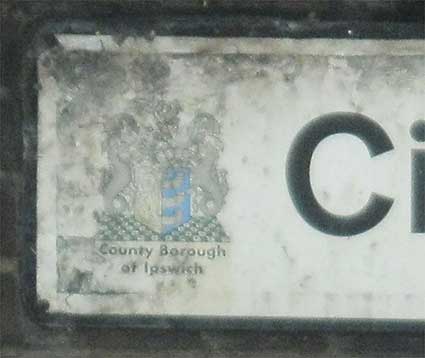 2015 images
To the left of the sans serif, upper and lower case street name is the vestige of a coloured Ipswich coat of arms. Below that is a small piece of text (which someone has tried to obliterate with paint on the St Matthews end – now discolouring) which is more readable at the end close to St Matthews School:

This takes us back to a time when the county was split administratively into East and West Suffolk and Ipswich County Borough. Reorganisation in 1974 amalgamated east and west and removed many of the powers and responsibilities of the Borough, concentrating many finances and powers in a new Suffolk County Council. Another view of a similar Civic Drive street nameplate from 1968 showing the coat of arms appears on our Ipswich tomorrow page.

For more information and maps of the Willis Faber & Dumas building at the bottom of Civic Drive and its effect of the Greyfriars area, see the 'Before Willis' section of our  Lost trade sign page. 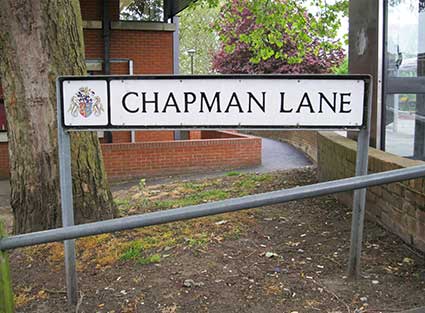 2015 image
Just off the northern stretch of Civic Drive, on the east side is Chapman Lane. It runs behind the Wolsey Theatre buildings and is mainly seen as a service road for deliveries to the rear of shops fronting the eastern section of St Matthews Street and for car parks to the north of the former Civic Centre site. However, it does have an interesting street name derivation. Interestingly, this part of the road is labelled Black Horse Lane on a 1994 street map of the town, so this must be a more recent naming. 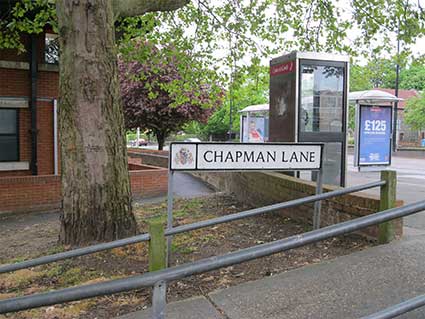 Civic Drive (with central reservation) is in the background; this is a riot of street furniture: bus shelter, telephone kiosk, ramp handrails, street sign and, amongst the trees, parts of the  Church of St Matthew. 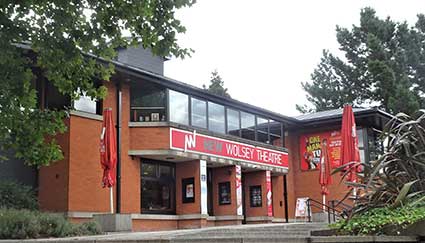 2019 image
Above: the most recent incarnation of the New Wolsey Theatre. As part of the 2020 building of the 'Golden Pavillion' and refurbishment, the NWT sign was removed (see the comparison images below, courtesy of Tim Legget, to whom our thanks).
The theatre building was designed by Roderick Ham for Ipswich & Suffolk New Theatre Trust. Construction was carried out between 1977 and 1979 by Haymills Contractors Ltd with Carr And Angier theatre consultants providing planning advice and design/installation of all technical systems and equipment. From 1979 to 1999 the theatre was operated by The Wolsey Theatre Company, a regional repertory company. The theatre was known for showing performances of drama, comedy and musical plays and was used almost exclusively as a producing house. Due to financial problems dating back to the mid-1990s, the operating company closed the theatre in 1999 and was dissolved. 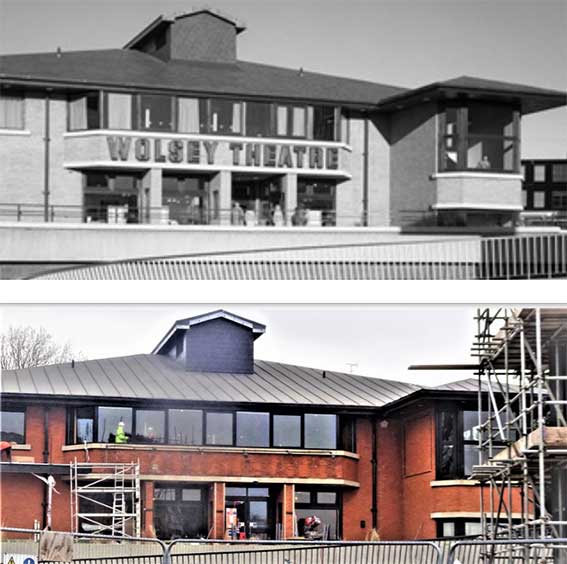 Comparison images courtesy Tim Leggett
In 2001, the theatre reopened and is now owned and operated by the New Wolsey Theatre Company which is a registered charity with a stated mission of presenting high quality, diverse and accessible work, and operated on a not-for-profit basis.

The ghost sign, 2020
Above the staining on the brickwork left by the lettering 'WOLSEY THEATRE' which was here from 1979 for over twenty years – and still visible in 2020, as spotted by Tim. 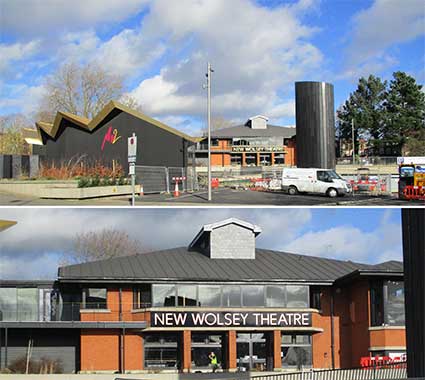 2021 images
By January 2021 the new lettering is in place. To the left in the upper image is the newly completed 'Golden Pavilion' housing New Wolsey 2.