Hope House is a former orphanage which stands at 160 Foxhall Road on the corner of Alan Road. Minutes, reports and records are kept for 1876-1942. Known then as the "East Suffolk Girls Home", the orphanage was previously situated on 14 Church Street, Ipswich and was opened on the 1st January 1875. The "Girls Home" was then moved to Hope House on Foxhall Road in January 1883 established under Deed of Trust. Here the girls were trained for domestic service and to do all the work of the house under the Matron's supervision. They received elementary education, learned to make and mend clothing and taught to knit. The orphanage was then closed around 1940 and sold. Hope House often called "The Hostel" was then used to house the Woman's Land Army girls during World War II. Here they were taught how to milk cows and were taken to farms all around Ipswich to work on the land. See the Land Girl photograph album below. Hope House used to have a large garden at the rear for outbuildings and for the residents' activities. That area has gradually filled with newly built housing in recent years. The Victorian building itself had been unoccupied sporadically over the last couple of decades until conversion to flats. 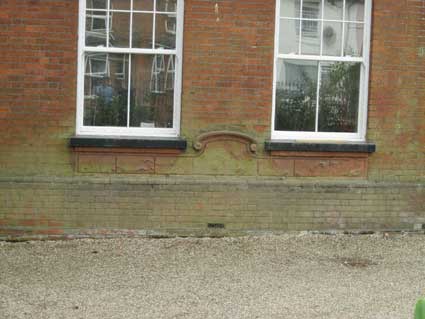 From the 'Extension' at the left to the shrubs at far right, there is a range of memorials in various states of preservation. First the Extension (see the enlargements):-

A litany of famous Ipswich names: Tollemache (brewers and landowners behind the 'Tolly' part of Tolly Cobbold), Grimwade (see Harriet Grimwade below) and Paul, presumably of the malsters whose name can still be seen down at the Wet Dock. Hugh Lawrence Bantoft was articled to the solicitor's firm of E. P. Ridley of Ipswich. He served as Private, 1st East Anglian Field Ambulance, Royal Army Medical Corps. It seems likely that this is the person commemorated.

The shaped tablet below reads:

'THIS MEMORIAL STONE
WAS LAID BY
J.J. COLMAN ESQ. MP
OF NORWICH
ON THE ? OF MAY 1892.
-
[unreadable small text: probably builder's name]'

Jeremiah James Colman (14 June 1830–1898) was an English mustard manufacturer and the third member of the family in charge of the eponymous company Colman's. He was a popular philanthropist in his home town of Norwich and a Liberal politician who represented the city in parliament. In 1866 Jeremiah James Colman was appointed mustard maker both to Queen Victoria and to Napoleon III of France. He became Mayor of Norwich and championed nonconformity, and persistently urged religious freedom. 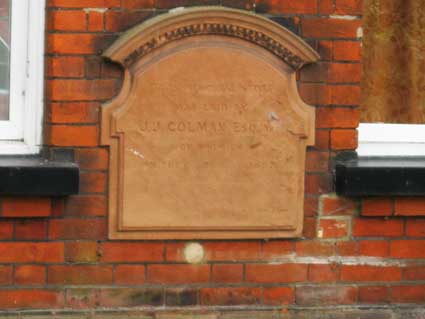 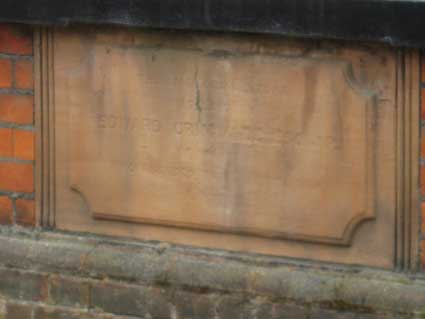 The cartouche to the left of the main door:

'THIS MEMORIAL STONE
WAS LAID BY
EDWARD GRIMWADE ESQ. MP
OF ???
WHO FOUNDED ???'

The cartouche to the right of the main door:

'THIS MEMORIAL STONE
WAS LAID BY
HARRIET ISHAM GRIMWADE
DAUGHTER OF EDWARD GRIMWADE
MANAGER OF THE ORPHANAGE FROM ???
UNTIL ???
DEDICATION TO THE ???'

Harriett Isham Grimwade, part of the Ipswich Grimwade clothier dynasty, never married. Instead she devoted most of her energies trying to help others. She was a founding member of Hope House which opened in 1883. Such ladies of “the educated middle classes” where encouraged to do good works – and around 15% did so. The home was intended to take in orphaned girls or girls from families where the mother had died (probably during childbirth) to bring them up to be trained to become domestic servants. Hope House did such a good job that girls from the Home were in demand locally to work in the homes of the better-off. If girls were deemed to be physically or mentally deficient, they were passed on to St John’s Children’s Home on the Corner of Bloomfield Street and Freehold Road. It was thought that only a girl who was mentally and physically strong could cope with the long hours and tiring regime of work as a domestic servant.
The Hope House Home was financially self-supporting, money being raised locally – some of the girls who had lived there, often from infancy, until aged about 16, voluntarily paid a small amount to the home once they had moved on to employment. Harriett and other sympathetic ladies from around the Town had their own Committee to oversee the financial welfare of the home. Harriet died of cancer in 1883 – she was such a loved lady that she had her own memorial alongside the Grimwade tomb at Ipswich Cemetery. Children from the home sang “Safe in the Arms of Jesus” at the Cemetery Gates as Harriett’s cortege passed by, wearing mourning clothes they had made themselves. The last girls were taken in by Hope House just before World War II.

The fact that a small road in the new development around Pownall Road, off Duke Street, is called Isham Place prompts some additional research. We learn from the Ipswich women in history website (see Links) that Harriet Isham Grimwade (1843-1893) was Ipswich’s first publicly elected woman. She began charitable work in her mid-20s at the Tanners Lane Mission, a centre for poor working-class families (coincidentally the street lost during the Civic Drive development which was also the home of C. Mills foundry documented in relation to drain castings on the Island site). In 1871 she became secretary of the new Ipswich Women’s Suffrage Society. Later she founded the East Suffolk Girls’ Home at 14 Church St (this no longer exists, but was near St Clement’s Church) which expanded in 1883 to accommodate 50 girls at Hope House. Elected onto the School Board in 1880, she served for six years during which time she was responsible for cookery classes. She took an active role in the 1885 Great Liberal Demonstration when Liberal candidates spoke before the General Election. Given the possible association on this web page alone to the Tollemache family, perhaps her middle name links to the Isham baronetcy of Northampton. If anyone knows, please contact us. 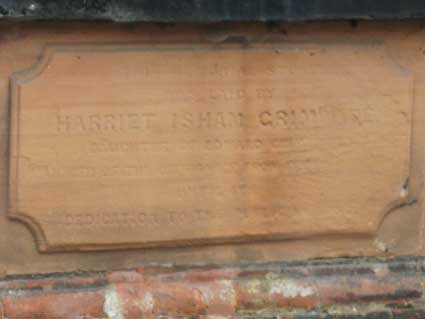 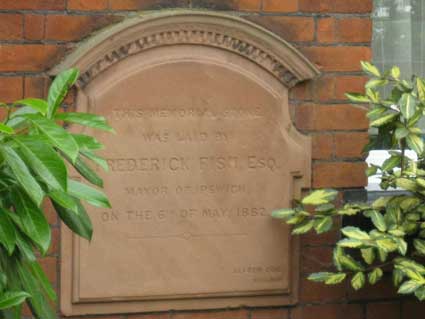 At far right another shaped tablet:

'THIS MEMORIAL STONE
WAS LAID BY
FREDERICK FISH ESQ.,
MAYOR OF IPSWICH,
ON THE 6TH OF MAY, 1882.'
-
ALFRED COE
BUILDER' 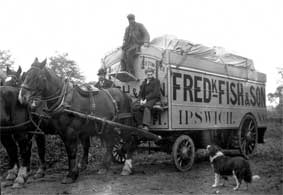 Frederick Fish & Son were linen & woollen drapers with premises at number 46 & 48 Tavern St, on the corner of St Lawrence Street. When Frederick Fish & Son  closed down the shop site was taken over by Boots the Chemist, only to become a clothes shop later. One assumes, due to the unusual surname, that this is the same man who became Mayor. 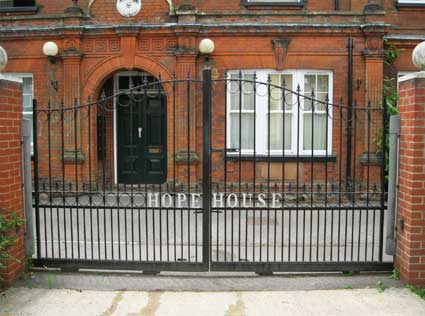 Above: the modern gates installed since conversion into flats with the cut-out lettering: ' HOPE HOUSE'. 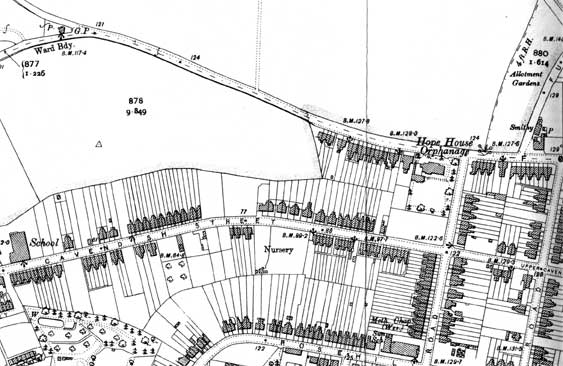 The above 1902 map shows 'Hope House (Orphanage)' with its large garden to the rear. Foxhall Road at this time had a few houses to the west of Hope House, then open land on both sides. The Ipswich & Suffolk Freehold Land Society was busy developing the streets to the south (Cavendish Street, Alan Road, Rosehill Road, Newton Road etc.) with semi-detached and terraced housing and smallholdings. The Blooming Fuchsia public house over Foxhall Road on the corner of Fuchsia Lane had a 'Smithy' next door and open land around it at this time.
There are some interesting Rosehill area house names nearby.

Land Girls at Hope House
This message was received in April 2014: "My Nana Joan Birchall was a land girl during WW2 she then emigrated to NZ and married my grandfather Desmond Lynn. I have recently been given a box of her photos from this era and in her photobook is a reference to Hope House in Ipswich. I have these photos scanned here in NZ and if you are interested I am able to attach and send to you if you would like... I have no idea who the photographer was but suspect some were taken by Joan and the rest one of her friends. You are welcome to use them as you see fit. It's Britains history and it's sitting in a memory box here in my desk in NZ and I just feel the land girls deserve better. Kind regards, Kara Lynn, New Zealand."
A. 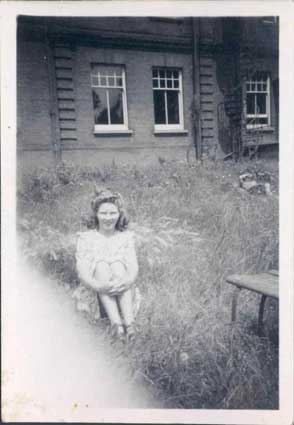 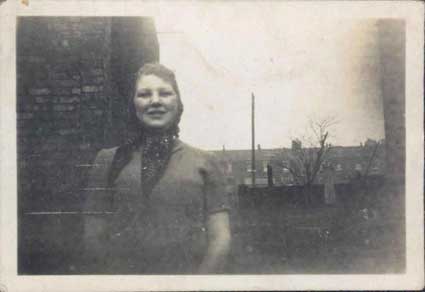 All photographs courtesy Kara Lynn
Our thanks to Kara for both finding our website and sending in these amateur photographs, probably taken with a Box Brownie. The images are redolent of another time, another world – yet still just within living memory – when Europe was turned upside down and women 'did their bit', training to help feed the populous. We show the captions provided by Kara, some from the back of the old prints in her box.
C. 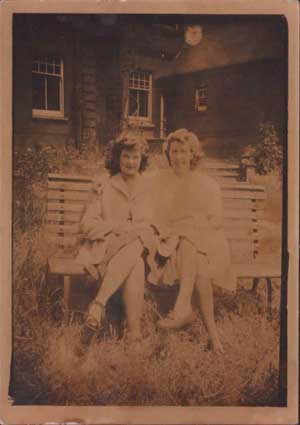 The smiles and laughter show the immense camaraderie amongst members of the W.L.A. and belie the hard toil of day-long agricultural work in all weathers.
E. 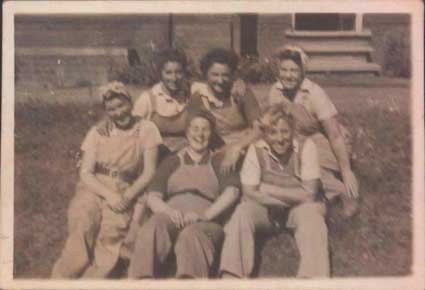 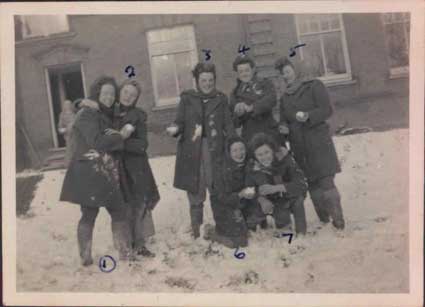 The turn of the seasons is captured here with bitter cold and sweltering heat in the rear garden of Hope House. The rather neglected, overgrown grass indicates the priorities of the time.
G. 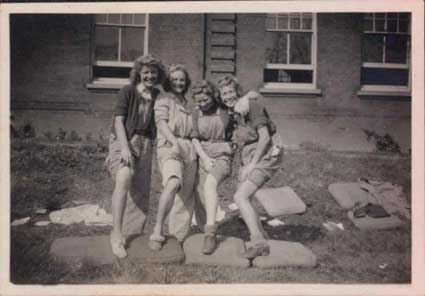 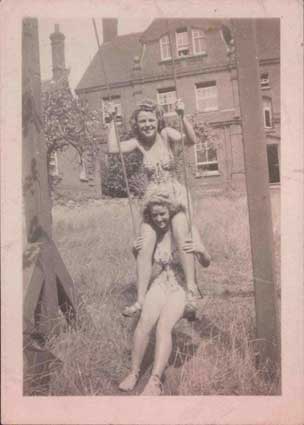 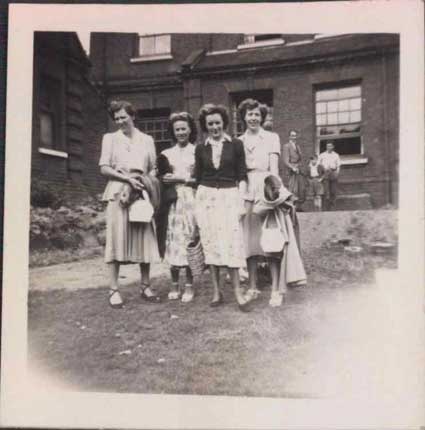 See Links (Specialist subject areas) for the Women's Land Army enthusiast website which gives much more information and background to the story. 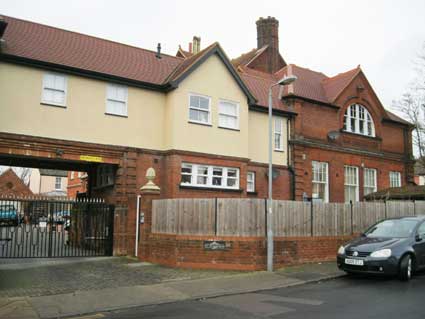 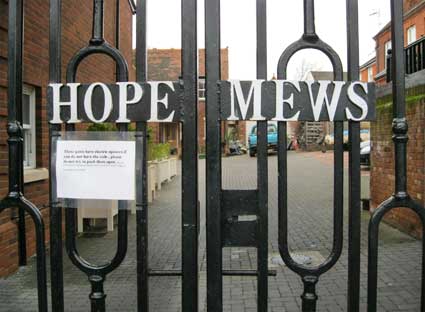 2015 images
Above: the extension and bridge building over the 'HOPE MEWS' gates from Alan Road. It took many years for the housing to be built in the rear garden of Hope House. First came a row of housing fronting Cavendish Street, also accessed from this stretch of Alan Road and, much more recently, Hope Mews.