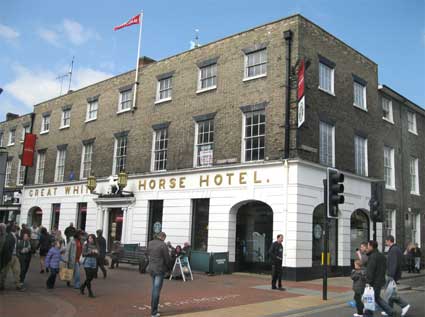 2012 images
Defining a once major junction and the corner of Tavern Street and Northgate Street, notably lettered in gold relief capitals:

with its invaluable full stop this hotel-which-is-no-longer-a-hotel has a notable history. The Georgian facade hides a timber-framed structure dating back to the at least 1518, when it was listed as 'the White Hors Inn': one of the many pilgrims' inns (see Lady Lane). Interestingly, that most famous documenter and lampooner of pilgrims, Geoffrey Chaucer, whose ancestor ran a tavern/coffe house on the corner of Tavern Street and Tower Street (comemorated by a plaque on Tower Street). The Great White Horse is famous as a coaching inn (it had stabling for 46 horses), as the lodging place for kings and famous personages and its place in Charles Dickens' The Pickwick Papers. 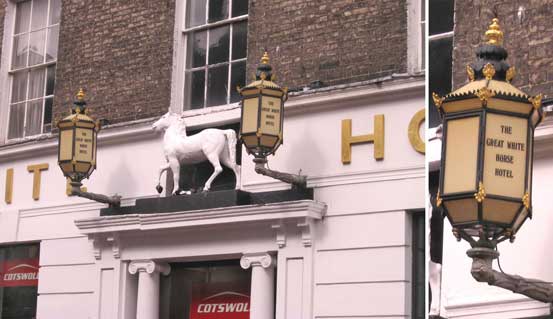 The 'period' look of the Tavern Street frontage belies the fact that is a re-fronting from between 1815 and 1818, presumably during the widening of the street. It narrowly missed demolition soon after that when the borough council acquired a block of properties between Tower Street and Northgate Street. The famous white horse sculpture above the hotel's front door is flanked by fine lamps which repeat the building's original function and name in condensed capitals. An original 18th century white horse was removed and now stands on top of a column outside the White Horse Inn at Tattingstone, which is a 17th Century Grade II listed building.

Tattingstone White Horse Inn
The horse's replacement, as noted by Richard Cocke in Public sculpture of Norfolk and Suffolk (see Reading List) is decidedly heavier with shorter legs and resembles a Suffolk Punch, a breed which dates back to 1768. The pub was further extended and altered by J.S. Corder (architect of the Scarborrow tea shop in Dial Lane) in 1893. Many will remember calling in at the lounge bar, which presumably was in the old carriage-yard and going through to the small, glazed snug bar. The troubled recent history of the hotel is mirrored by The Crown & Anchor in Westgate Street. It is, in 2012, home to shops and a coffee bar with night club above, but no hotel. 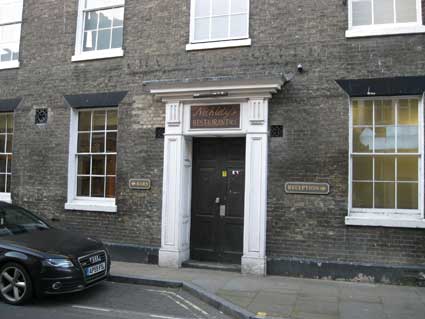 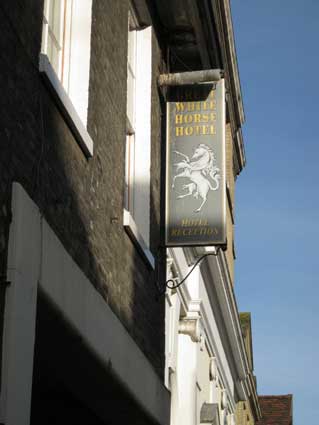 More defunct signs.
Moving up Northgate Street from the Great White Corner, we find  a side entrance ('Nickleby's Restaurant' above – get the Dickensian reference) with the signs: 'BARS' to the left and 'RECEPTION' to the right, still in place. Above a carriage entrance hangs the sign: 'GREAT WHITE HORSE HOTEL... HOTEL RECEPTION', replete with much pidgeon dung in the overhead lamp. Finally, through that entrance is the former hotel reception over the yard with 'GREAT WHITE HORSE HOTEL' in gold letters (similar to the frontage) running above. 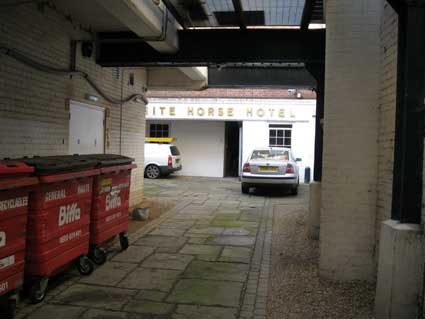 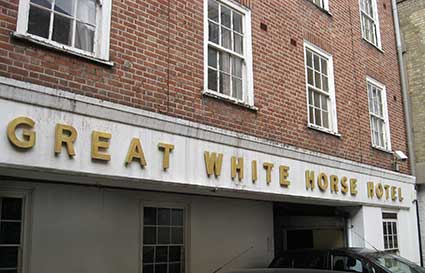 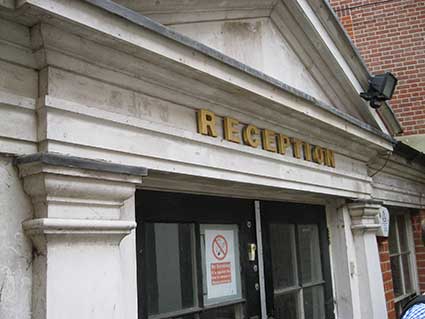 2016 images
Below: a view of The Great White Horse when Tavern Street was much narrower. The electric tram visible in the distance suggests that two trams passing one another outside the hotel would not have left much room for anything else on this street. 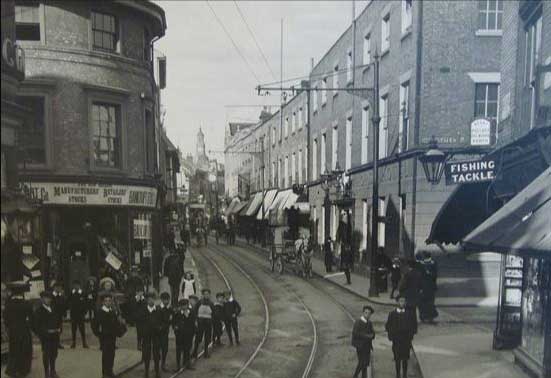 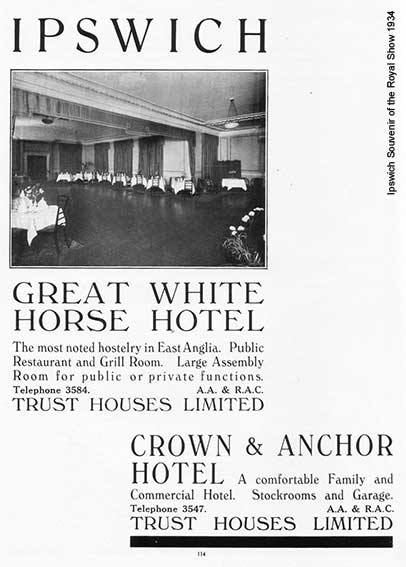 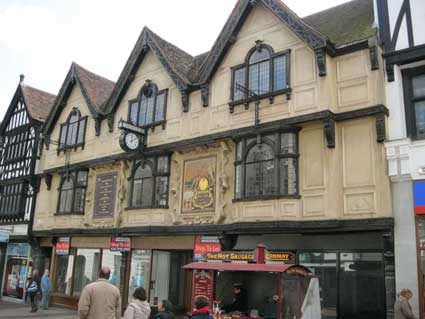 Across the road is one of Ipswich's most famous shops and, like the Great White Horse, is misleadingly named on the cement-rendered fascade. 50-52 Tavern Street was for many years the home of Croydon & Sons, the jeweller and clockmaker. The period look of the building is also recent (1931), being the work of architect, John A. Sherman, who was also responsible for the reshaping (some might say despoiling) of The Old Pack Horse Inn on the corner of Soane Street during yet another road-widening scheme. He lived in Northgate Street and his varied work can be seen all around the St Margarets Green area. Apart from the name in capitals: 'CROYDON' above the clock which projects out over the street, there are two pieces of lettering, suitably framed in 'historic' moulded frames. The most interesting shows a rather primitively painted Old Father Time (the painting taken from the original shop front, see below), winged and with his scythe and hour-glass, pointing down to a gilded clock and surrounded by the lettering:

The other panel is more recent, replacing an older company history, as it was the responsibility of Preston & Duckworth who took over the business in 1994 when Croydon's went into receivership. It does, however, document the original company history: 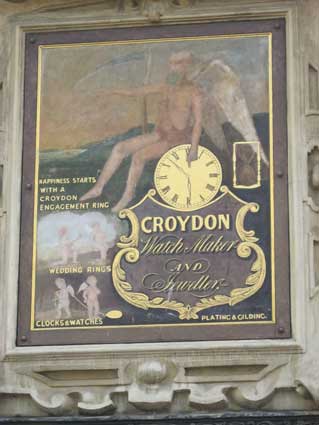 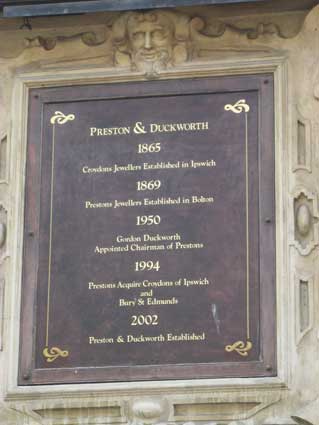 Again, many will recall taking tea and cakes in the upstairs cafe at Croydon's. Ironically, perhaps, Prestons moved from this site to the former Lawley's in Butter Market in 2004, only to go into receivership themselves in the following year. This building was used by several businesses and by 2015 was being converted to a branch of Tesco. 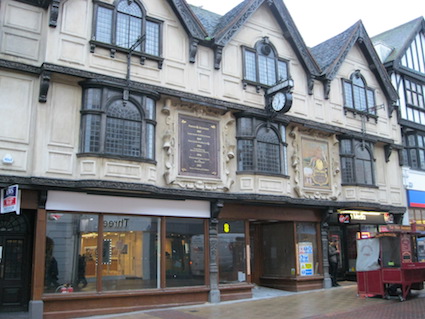 December 2014 images
Winter 2014 sees the empty Croydon's shop partially occupied by a mobile telephone company with 1920s interior features (staircase, stained glass window, moulded plasterwork), which was eventually occupied by a clothing chain in 2016.
See our page on Public clocks in Ipswich for a 2018 view of the building and its clock. 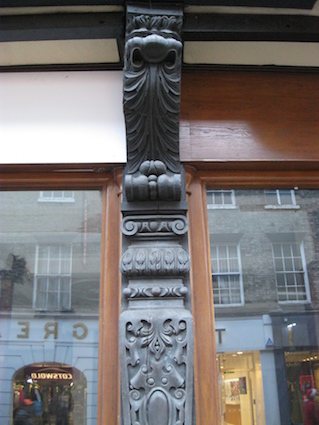 Above: one of the quirky, carved uprights on the Croydon's shopfront with the reflection of The Great White Horse in the windows. Does anyone else think that the upper part looks like a moustachio'd lion with flared nostrils and a hair lip? 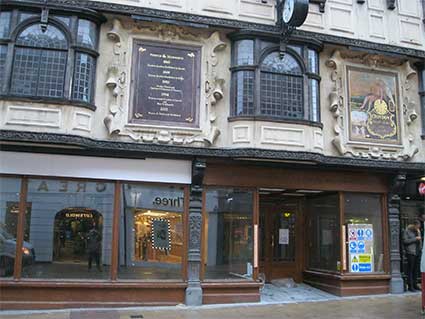 The term ‘Ipswich Window’ is sometimes used to describe an oriel window which projects out from the main wall, at an upper floor of a building, but which does not reach to the ground. Such a window is often supported by corbels or brackets, or is part of the jettied first floor. However, we learn from a website associated with James Bettley’s excellent Pevsner, East and West Suffolk volumes that the crucial feature which distinguishes the ‘Ipswich window’ is a specific design of glazing bars within the window:
‘They are similar to a Venetian window with an addition across the whole width and two small panes over the semi-circle.’ This type first appeared in London about the middle of the 17th century but soon spread to provincial towns. The spectacular examples on Sparrowe’s House (The Ancient House in Ipswich) led architectural historians to coin the term ‘Ipswich windows’. The window type was picked up and used extensively by the Victorian architect Richard Norman Shaw and others.
Looking at examples of ‘Ipswich window’ it would appear that they are not necessarily oriel in character, although they can be found in this form on The Ancient House in Butter Market and The Wheatsheaf at 24 Fore Street. The Ipswich window takes the central semi-circular section of the ‘Venetian window’ which projects above the rest, adds a glazing bar horizontally through the centre of the semi-circle and adds smaller panes either side to form a rectangular window.

The late 1920s design of the Croydon's frontage embodies flat and oriel versions of the Ipswich window. Other examples to be found in Ipswich include a buildings in Dial Lane, Tavern Street and St Margarets Plain and The Plough in Dogs Head Street. 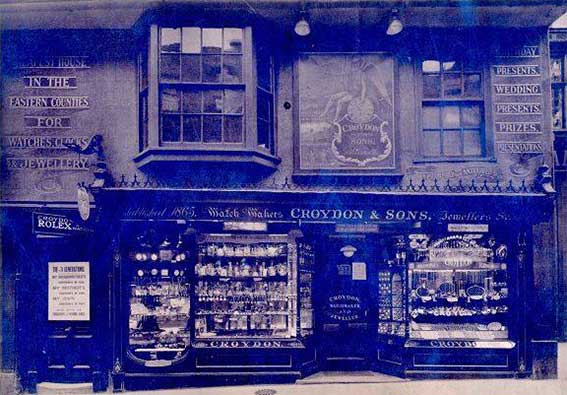 Pre-1929 photo courtesy the Ipswich Society
[UPDATE 3.11.2015: above, a remarkable photograph of Croydon's as it was before the street widening in the 1920/30s when many of the shop fronts on this side of the street, including Croydons, were demolished and rebuilt further back. This had already happened on the other side of the street in the 1800s when the Georgian front was added to the Great White Horse Hotel which has much older origins. This rare photo, taken of the shop before the old frontage was demolished, was discovered in a trunk in the building earlier in 2015 when Tesco were proposing to use the building. It was acquired by John Norman, Chair of The Ipswich Society.
The 'Old Father Time' painting is there before 1929 – lit by electric spot lights by the look of it – presumably was removed and incorporated in the very new, decorative scheme. Visible lettering on the old shop front:
‘GREATEST HOUSE
IN THE
EASTERN COUNTIES
FOR
WATCHES, CLOCKS
& JEWELLERY’

Across the board above the shop windows:
‘Established 1865, Watch Makers CROYDON & SONS, Jewellers’
There appears to be a further word beginning with ’S’ to the right. One wonders what the notice says on the door to the left...] 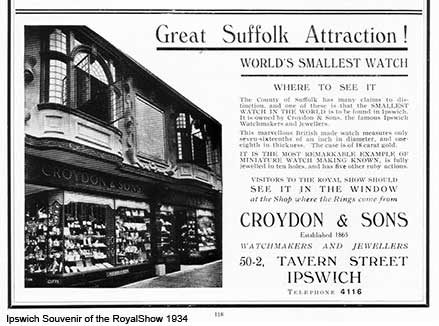 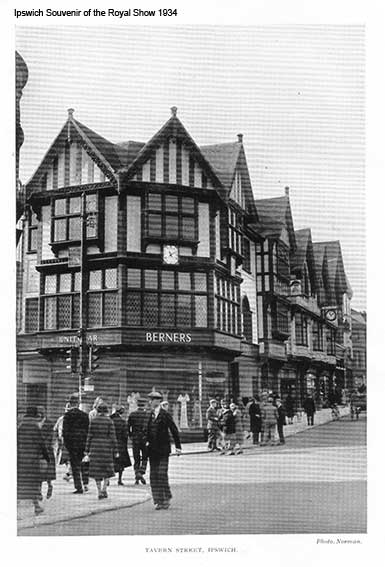 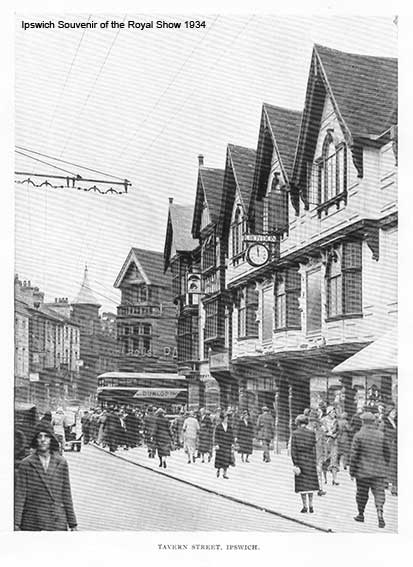 1934
Above left: the view from the end of Carr Street, Croydon's to the right. The gabled corner building is by Charles Benjamin Smith, who had been articled to Bisshopp & Cautley, but who practised in London. Above right: Croydon's in the right foreground. The balconied redbrick building on the corner of Upper Brook Street is the work of S.P. Pick, 1888 (the only work by this architect in Ipswich, as far as we know). George Thomas Pick (any relation to the architect?), general draper, occupied the premises at the junction, later John Collier tailoring and now the inevitable coffee addictive drug outlet. The turreted EADT building is seen clearly in the distance. For a 1905 postcard view from Carr Street looking towards Tavern Street, see our Symonds page. 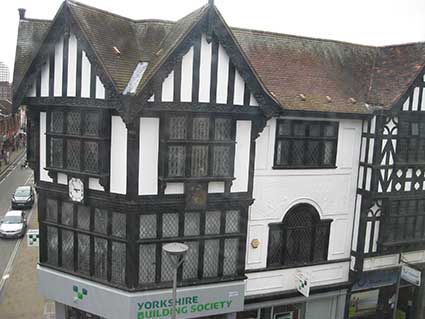 2016 images
The corner building on Tavern Street and Upper Brook Street.
See our page on Public clocks in Ipswich for a 2018 view of the building and its clock.
Here's a photograph of the moulded frontage taken from the disused first floor restaurant of The Great White Horse Hotel. 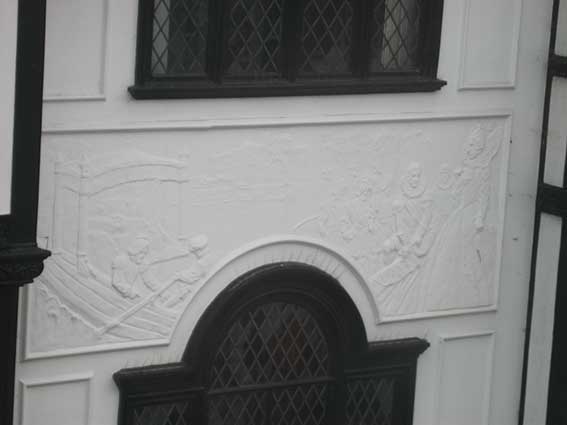 The plaster relief shows Sir Walter Raleigh and Queen Elizabeth I along with various helmeted Elizabethan soldiers (with characteristic curvy helmets), a canopied boat and an arched castle over a river in the background. Gallant Raleigh rescued the royal feet from getting wet and muddy in ‘a plashy place’ by sacrificing his plush velvet cloak to cover the puddle. Disappointingly, his cloak-laying is first recorded in Thomas Fuller’s History of the Worthies of England, published some 80 years after the supposed event. True or not, Raleigh enchanted the Queen and was one of her firm favourites – that is, until he fell from grace by secretly marrying one of her maids of honour and he was sent to the Tower of London.

See our page on Public clocks in Ipswich for a 2018 view of the 'The Walk' building (visible at far left in the Midland Bank building bellow) and its clock.

'Midland Bank', 12 Tavern Street
A little further up Tavern Street is the decorative frontage of the former Midland Bank building opposite Boots The Chemist and the Woottons lettering. Taken over and rebranded by HSBC (Hong Kong & Shanghai Banking Corporation), it bears the wording high up - banks seem to specialise in this, see Cornhill 2 for the Barclays sign -

The bank was founded by Clarles Geach as the Birmingham and Midland Bank in Union Street, Birmingham in August 1836. This suggests that either a mistake was made in the dating of the building fascade, or it was built for another bank with a different date of establishment. We think that the former is more likely, as we have always assumed that it was built specifically to house Midland Bank, probably in the 1930s after road-widening in Tavern Street. See the update below. 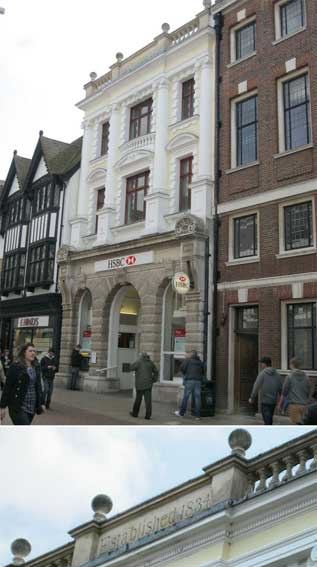 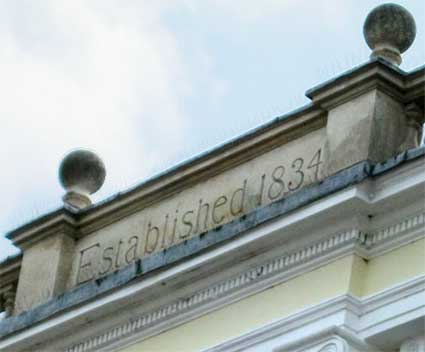 See our Warwick Road page for the frontage of 24 Tavern Street by John Medland Clark.
It is not far from here to Dial Lane, the Cornhill, King Street, Princes Street, Lloyds Avenue and Westgate Street, all of which offer public lettering.