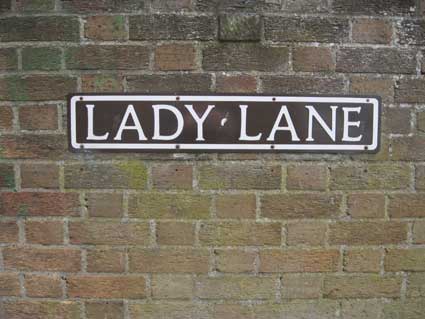 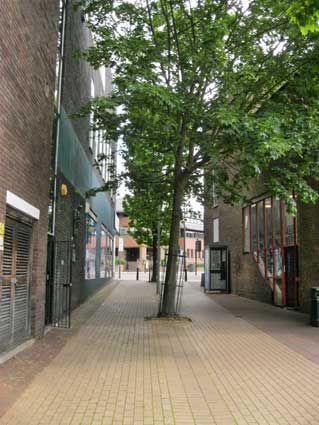 2014 images
Once lined by the almshouses built by Wolsey's uncle Edmund Daundy, Lady Lane as it is today with the memorial on the wall to the left.

Many Ipswich residents seem unaware of the historic importance of the town as a centre of religious pilgrimage, not to mention religious upheaval (the latter symbolised by the Martyrs memorial). However, one street name recalls that remote time. Lady Lane runs between Westgate Street and the top of Black Horse Lane (Black Horse Walk) and is now a mere passageway. The original shrine declined and was eventually dissolved during Henry VIII's Reformation purges of Catholic centres (1535-1541); hence the disappearance of the four friaries in Ipswich. The metal memorial fixed to the modern brick wall (the outside of Franklins sewing shop) in Lady Lane is supposed to represent the original pre-14th century carved wooden statue which was the object of devotion; the plaque below gives a brief outline of the history. This likeness is disputed (see the book review below). 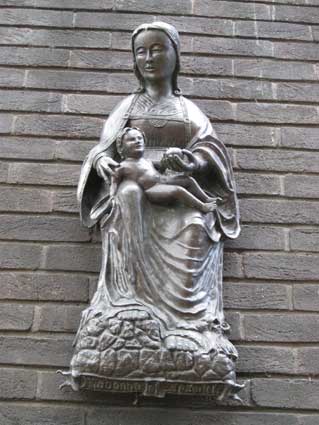 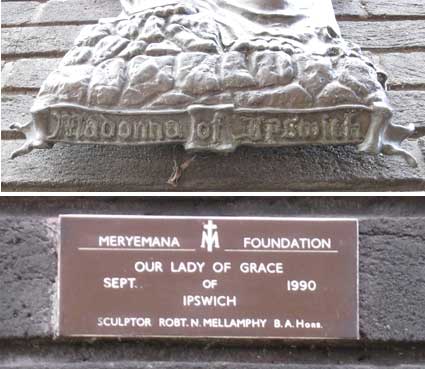 is carved on a scroll in gothic script at the base of the statue. Unfortunately the civic planting of sycamore trees in the lane shades this area in the summer months. The Borough Council has managed to expunge most of the graffiti on the brickwork.

Below the fine metal replica of the Madonna by sculptor Robert Mellamphy is a small plate:
'MERYMANA FOUNDATION
OUR LADY OF GRACE
SEPT.     OF     1990
IPSWICH
SCULPTOR ROBT. N. MELLAMPHY B.A. HONS.' 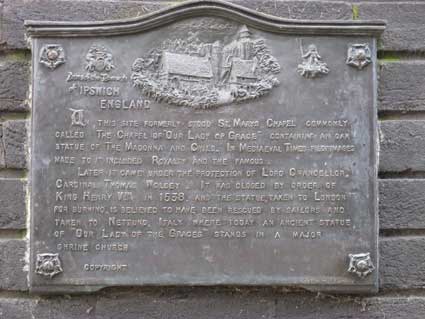 2013 images
And then the main commemorative plaque:
'Arms of the Borough of Ipswich England [under crest]
On this site formerly stood St Mary's Chapel commonly called The Chapel Of "Our Lady Of Grace" containing an oak statue of the Madonna and Child. In medieval times pilgrimages made to it included Royalty and the famous.
Later it came under the protection of The Lord Chancellor, Cardinal Thomas Wolsey. It was closed by order of King Henry VIII in 1538 and the statue, taken to London for burning, is believed to have been rescued by sailors and taken to Nettuno, Italy where today an ancient statue of "Our Lady Of The Graces" stands in a major shrine church.
Copyright
1989 Robt. N. Mellamphy'
[We hope that the sculptor and Meryemana don't mind us breaking their copyright in reproducing this text; after all this wouldn't be much of an historic lettering website without it, would it?] 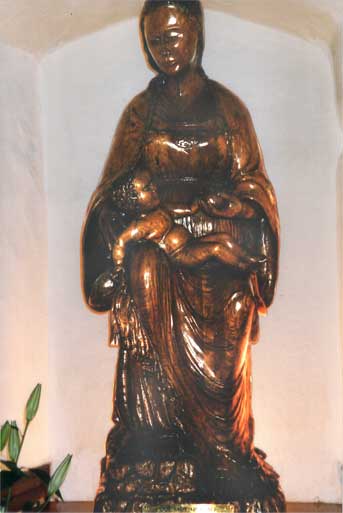 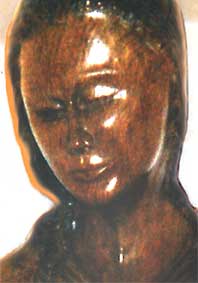 
The shrine to Our Lady of Grace was in recent years restored in the nearby (Anglo-Catholic) St Mary-At-Elms Church in Elm Street. The replica statue is, again, by Suffolk-based sculptor Robert Mellamphy, and it was dedicated with great ecumenical ceremony in September 2002. The image is a copy of the one at Nettuno in Italy, which many people believe to be the rescued statue of Our Lady of Ipswich. If this is true (see the book review below), one can only imagine the journey; condemned to being burnt by Protestant reformers, rescued by Catholic adherents and smuggled from London to be shipped to the west coast of Italy. The only shame about the wooden version is that, nestling in its niche in St Mary-At-Elms, one is unable to see the small characters from Ipswich history which – we are told – the artist has carved on the back of the figure. This photograph was taken during the first Ip-art festival in 2003.

See our Museum Street page for 1778 and 1902 comparative maps including this location.
Maps of the area are also on our Civic Drive page.

The publication in 2013 of noted local historian, John Blatchly & Diarmaid MacCulloch: Miracles in Lady Lane (see Reading List) gives a remarkable insight into a lost pocket of Ipswich history. The book contains primary research and fascinating hypotheses concerning the precise location of the lost Shrine of Our Lady of Grace just outside the town's Westgate and its fate.

The image on the back cover, an anonymous watercolour painting, and a photograph (taken around 1875) on the inside back cover are striking. They show the almshouses built along either side of Lady Lane by Edmund Daundy at some time before his death in 1515. Daundy happened to be the uncle of Cardinal Thomas Wolsey the second most powerful person in the country after the King. These almshouses were on the site of the 14th century St John’s Hospital almshouses built for the poor of the parish of St Matthew. They adjoined the shrine chapel which stood just outside the Westgate (perhaps on the site of today’s haberdashery shop and QD store on St Matthews Street). The shrine chapel stood on the site of – or used the same structures as – the chapel of All Saints which, although not mentioned in Domesday, had early Norman decoration. Ironically, these ancient, single storey buildings dating back to Tudor times were demolished as recently as 1877. Look at Lady Lane today and try to envisage it.

The other notable thing about the shrine is how relatively short-lived its enormous fame was. All Saints is first mentioned in documents of 1219, but is certainly earlier, and over time the name changed to the chapel of 'Our Lady of Grace'. On January 8th, 1297 a royal wedding took place in Ipswich. Princess Elizabeth, daughter of King Edward I, married the Count of Holland. Edward I stayed in the town for the ceremony with 'a splendid court'. The wedding took place at the Priory of St Peter and St Paul, which Henry II founded about 1130. There was clearly a royal chapel in St Peter's Church at the time of Edward I. It was thought that the wedding took place, not in any of the parish churches of the town, but in the Shrine of Our Lady of Grace, one of England's major shrines of Marian pilgrimage; this was also referred to in contemporary records as Our Lady of Ipswich. This royal wedding would have been the earliest record we have of a royal occasion at the shrine, but the authors correct the location in a note within the book. Pilgrims flocked to the shrine in the ensuing years.

By 1327 documents record the recent discovery of an image of the Blessed Virgin, perhaps beneath the flooring of the chapel, and ‘several great miracles had taken place’. Attracting further royal attention and becoming prosperous in the 14th and 15th centuries, the chapel of Our Lady of Grace can be seen as a younger sibling of the Marian shrine at Walsingham in Norfolk. The scene was set for a ‘miracle’ concerning the ‘Maid of Ipswich’ in 1516 when the twelve year old daughter of Sir Roger Wentworth of Gosfield (twice MP for Ipswich who lived at Thaxted in Essex), in a tormented state had a vision of the Virgin. She demanded to be taken to the shrine of Our Lady of Grace in Ipswich and was apparently cured in a tumultuous fashion. Her somewhat anarchically pious activities while in Ipswich caused a great stir and people came to witness them. One notable witness was that most important resident of the town, Lord Curson who lived in his mansion on St Nicholas Street; he wrote down his account of events for the King.

Queen Catherine of Aragon was the next royal superstar to visit the shrine in 1517, followed by Cardinal Wolsey, papal legate and Lord Chancellor, the same year – his first major return to his home town since his rise to great power in the land – and finally by King Henry VIII himself in 1522. Both royal visitors stayed at Curson House during their visits. This patronage meant that it was boom time for the shrine and a number of hostelries jockeyed for custom from visitors and pilgrims. At the other end of town The Salutation public house survives today with its name evoking the Annunciation. 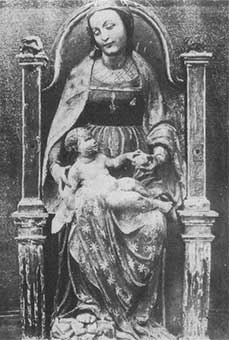 Wolsey’s intention to establish a ‘college’ school to rival the likes of Eton College which would be linked to the shrine took shape around the same time. The Papal Bulls for his Cardinal College Oxford were complete by 1526, but those for Cardinal College Ipswich were not in place until 1528. Opposition to worship of graven images and idolatry from Lollards, William Tyndale and, locally, the preacher Thomas Bilney was growing as the shrine became more famous and prosperous. In 1529 Wolsey was stripped of his government office and property by Henry VIII, including his magnificently expanded residence of Hampton Court, which Henry chose to replace the Palace of Westminster as his own main London residence. However, Wolsey was permitted to remain Archbishop of York. He travelled to Yorkshire for the first time in his career, but at Cawood in North Yorkshire, he was accused of treason and ordered to London by Henry Percy, 6th Earl of Northumberland. In great distress, he set out for the capital with his personal chaplain, Edmund Bonner. He fell ill on the journey, and Thomas Wolsey died at Leicester on 29 November 1530, around the age of 60. The demolition of his half-built Ipswich college – only the Wolsey Gate in College Street remains today – was recorded by The Bard:-
'Those twins of learning that he rais'd in you,
Ipswich and Oxford! One of which fell with him,
Unwilling to outlive the good that did it;
The other, though unfinish'd, yet so famous'
(William Shakespeare: Henry VIII)

From 1536 and under Wolsey's former servant, Thomas Cromwell, the Reformation and establishment of the Church of England progressed; the first officially-sanctioned bible came in and worshipped images were out. Ipswich monasteries were dissolved along with so many others. The days of the already struggling Ipswich shrine were numbered and eventually the building was stripped of valuables and building materials. Evidence of its existence seems to have survived until the mid-18th century.

The seductive conspiracy theory that the Ipswich sculpture wasn't burnt at Chelsea, but smuggled from London by Catholic sailors and taken to Italy is dismissed by the authors of Miracles in Lady Lane out of hand. The style of the carving of the image in Nettuno is much later than the statue of the Virgin which was rediscovered in the Lady Lane shrine chapel by 1327 (see the image of the Madonna in Nettuno at the right). Also, those involved in the purging of idolatry from Cromwell downwards knew the importance of the  removal of the image and its public burning; the failure to do so seems very unlikely.

This book is a fine addition to the rich roller-coaster of the history of Ipswich.

We have much more on Wolsey's College.