Roving around Ipswich history, one eventually bumps against periods when the town seemed full of monks also on several later occasions, soldiers and militiamen. In an attempt to address the former here is a table of the Roman Catholic establishments in the town in chronological order of founding. The monastic establishments were dominant forces in the town for three or four hundred years until their dissolution under Henry VIII and our very own Cardinal Thomas Wolsey (and later Thomas Cromwell, known as 'The Hammer of Monasteries').

We can do no better than quote Simon's Suffolk Churches website (see Links):-
"Once, five monasteries (two convents and three friaries) stood in Ipswich and none of them survives today. In fact, only the ruins of the Blackfriars Friary, [its church], give an idea of how a medieval monastery looked while the others have completely disappeared. In 1263, the friary was founded and remained there for over 250 years. Like everywhere else, Henry VIII dissolved the monasteries in Ipswich and ordered them to give their property to the state. After closing in 1537, the monastery buildings were left standing - unlike their church of St. Peter and Paul whose ground was used to build [Wolsey's ill-fated] college. But in the 17th century they fell into disuse and some of them were quickly pulled down. After some decades, only the four arches remained visible, giving upcoming generations a hint that there was once a religious building on this site. It wasn’t until the 1980s that the rest of the monastery was uncovered again and preserved. These measures also uncovered one of only three surviving stone altar structures in Suffolk. Sometimes it just needs a city redevelopment project to preserve the past – even if it’s a 1980s one which includes a car parking lot."

Two Augustinian Priories were established. Holy Trinity, by St Margaret, was roughly where Christchurch Mansion is today; St Peter & St Paul was east of the current church of St Peter. The Priories received their income from land transferred from the churches they served, which was either sublet for rent, or used for growing produce for sale. In addition, the town had a number of chantry priests working in the parish churches and chapels, and possibly attached to one of the two Priories. No trace of either Priory survives today, although the building that houses an estate agent on the corner of Soane Street is part of the former hostel of Holy Trinity (The Old Pack Horse Inn) where pilgrims and visitors would have been housed. On the present-day carved corner post you can still see the emblem of the Priory: a shield which bears the Tau, or St Anthony's, cross with a sun and two moons for the Holy Trinity. This is the only visible vestige of the establishment, perhaps, although the wall between the Mansion lawn and St Margaret's churchyard does contain a small 'ecclesiastical' doorway, now bricked up, see our St Margaret's Church page for more images. 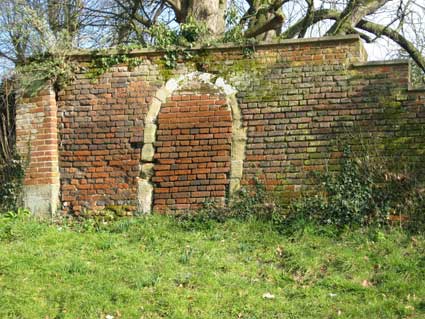 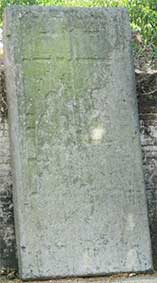 See our page on the Withypoll memorials stone which is sited some yards from the arch.


By the 13th century, other organisations were beginning to serve other needy ministries of the Church. Most predominant were the orders of Friars, who were preachers, teachers and evangelists. Three orders of Friars had communities in Ipswich. In 1278 the Carmelites, or Whitefriars, arrived. They were a very learned order, spending their time studying and lecturing, much in the manner of a modern university.They had their Friary roughly where the Buttermarket Shopping Centre stands today. During the course of the 14th century, it expanded rapidly, and stretched all the way from Queen Street to St Stephen's Lane. It was the biggest foundation in Ipswich, and one of the largest Carmelite communities in England.

The Franciscans, or Greyfriars, were missionaries and itinerant preachers, and in 1298 established a base house near where the tower block of St Francis House stands today, just to the west of St Nicholas. They were particularly popular with the ordinary people, for their work often involved helping the poor. Ironically, the house would later be used by Presbyterians expelled from the Ipswich parish churches in the 1660s, before they established their own church in what would become the Unitarian Chapel across the road. The Friary was demolished in the 18th century, but some surviving stones forming an arch are set in the wall by St Clare House just to the west. As well as giving their name to a tower block, they are also remembered in the name of the Greyfriars Complex, one of post-war Britain's largest and ugliest urban renewal schemes, which went up in the late 1960s, but is now largely demolished.

The only substantial remains of a medieval community's foundation in Ipswich are those of the church of the Dominicans, the Blackfriars, whose Friary of the Blessed Virgin lay to the south of Tacket Street. The Blackfriars had been founded by St Dominic, 47 years earlier, and were intended as an order of preachers, who tried to live 'the apostolic life' in community with each other. St Dominic taught that those who took a vow of poverty were freed from the care of property to travel and to preach, as described in the Gospels and the Act of the Apostles. The Blackfriars community was the first of the three Friaries to be established, in 1263. It expanded rapidly; within 15 years, there were 50 members, out of 20,000 worldwide, a number that would not be reduced until the Black Death in the late 1340s. It gradually took over the fallow land that lay to the south and east, including part of the town wall and ditch, and new buildings were erected. Unlike the Priories, the Friars were not allowed to own land beyond their immediate premises. Instead, they relied on charitable donations for their upkeep. This might have been their salvation; but it proved to be their downfall.

The Friaries, of course, had little in the way of land, and were not such a priority for asset stripping. However, the State was particularly wary of preaching orders, who could not be relied upon to toe the new line. Only one in five Parish Priests in Suffolk had been considered trustworthy enough to be licenced to preach by the ruling Protestant reformers; the Friars were certainly not to be accorded this privilege. They were left to wither on the vine. Unfortunately for the Government, the Friars began to sell their possessions in order to survive. The Treasury soon realised that there would be nothing left for them to sequester, and so in November 1538 the Friaries were closed, their assets also going to the State.

See also our gallery of historic maps of Ipswich to spot locations of monasteries and churches. John Speed's map of 1610 is the closest to the dissolution.

Leper and other Hospitals
These seem to have been connected to monastic establishments and churches.
Hospital of St. James. Little is known of this except from incidental references. It lay in the suburban part of St. Margaret's parish, probably on the border of St. Helen's parish, and near a lane (itself perceived as running roughly north-south) leading to St. Helen's. The hospital housed both men and women and was intended for lepers.

Hospital of St. Leonard's. The church of St. Augustine is mentioned in Domesday as being held by Lestan the priest. It was located at the southern end of Stoke, but decayed and disappeared during the Middle Ages (it was still in existence tempore Edward II), which is why it is not acknowledged on Speed's map. Nearby was the leper hospital of St. Leonard's, a poor foundation probably reliant on alms.

There were two other leper hospitals in Ipswich, dedicated to St. Mary Magdalene (in the vicinity of St. Helen's church) and St. James; that of St. Mary Magdalene was first mentioned in 1199, when the king granted it a fair to be held on the day of St. James Apostle, on its own land. In the 14th century the Hospital of St. James (which seems be distinct from that mentioned above) was united with it, to be administered by a single master.

In addition we hear of a hospital which sheltered the poor (1339) in the suburban part of St. Matthew's parish, and a Hospital of St. John of Jerusalem (1414) in St. Margaret's parish.

[The above information comes from Stephen Alsford's History of Medieval Ipswich (see Links).]