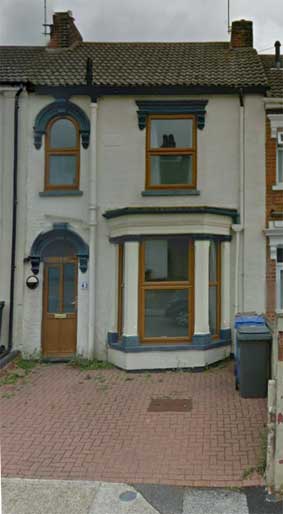 2013 images
Number 42 Palmerston Road features a cartouche with a heavily-overpainted name in a hard-to-read gothic script:

Is that really a full stop after the 'N' of 'Kerrison' (probably damage to the surface)?

In 1856 Sir Edward Kerrison of Brome Hall purchased Pool Farm for the purpose of establishing a Reformatory. There were 235 subscribers towards the cost of the purchase, but the main cost was borne by Sir Edward. Pool Farmhouse was a very dilapidated building with a barn and other farm buildings with 11 acres 1 rood and 1 perch in Thorndon and approximately 5 acres in Stoke Ash. It was owned by the Hammond family and had two tenants, Miss Charlotte Hammond and Mr Berry who were kind enough to vacate the premises.
Between 8th February and 13th March the necessary alterations were made and after inspection by the Prison Inspector of the district a certificate was granted by the Home Office for the 'Suffolk Reformatory'. On 1 1th February Mr and Mrs Robert Gill were elected by the committee as Master and Matron at a salary of £100 and £50 allowance for rations. On the 31st March the first boy, committed at Bury Sessions, was admitted. A Labour Master, at labourers wages, to assist in all outdoor employments, had been engaged. At Sir Edward's death in 1886, his widow, Lady Caroline Kerrison, desired to perpetuate his memory by naming the Suffolk Reformatory as Kerrison Reformatory and in June 1887 the Trust was formed. 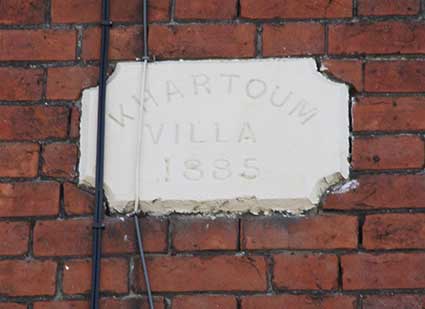 2021 images
The enhanced image above right shows the house plaque with ubiquitous cables on the outside of the house:

The Battle of Khartoum was the conquest of Egyptian-held Khartoum (1884-5) by the Mahdist forces led by Muhammad Ahmad. Egypt had held the city for some time, but the siege the Mahdists engineered and carried out from 13 March 1884 to 26 January 1885 was enough to wrest control away from the Egyptian administration. After a ten-month siege, when the Mahdists finally broke into the city, the entire garrison of Egyptian soldiers was killed along with 4,000 Sudanese civilians. General Charles George Gordon, a popular figure in Great Britain and former Governor-General of Sudan in 1876-79, was appointed to quell the rebellion in 1884. Gordon favoured an aggressive policy in Sudan but was killed in the fighting in 1885. This event clearly resonated in Britain and was comemmorated in the house name.
General Gordon and Khartoum are mentioned elsewhere in Ipswich: Khartoum Road (see Street name dreivations) and Omdurman Cottages on our Baden-Powell Cottages page; also in relation to St Helen's Barracks.

is inscribed in a much-overpainted and crackled surface. 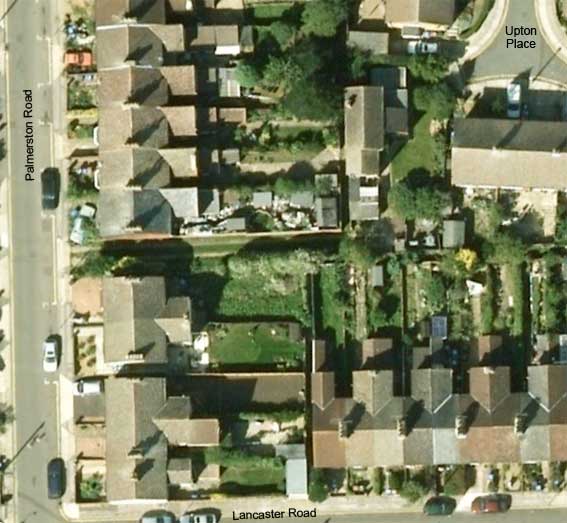 2007 aerial view
Home Cottage is one of those 'secret' dwellings one sometimes discovers tucked away behind houses where idiosyncrasies in cut-throughs and redevelopements of properties and roads have changed the landscape. On the 1902 eastern Ipswich map Home Cottage, numbered 24a, is shown tucked behind the terraced houses which line the eastern side of Palmerston Road, with access via a grass drive between numbers 24 and 26. The 20th century Upton Place cut through from Warwick Road curves roundand provides a rear access to the garage and garden of Home Cottage. 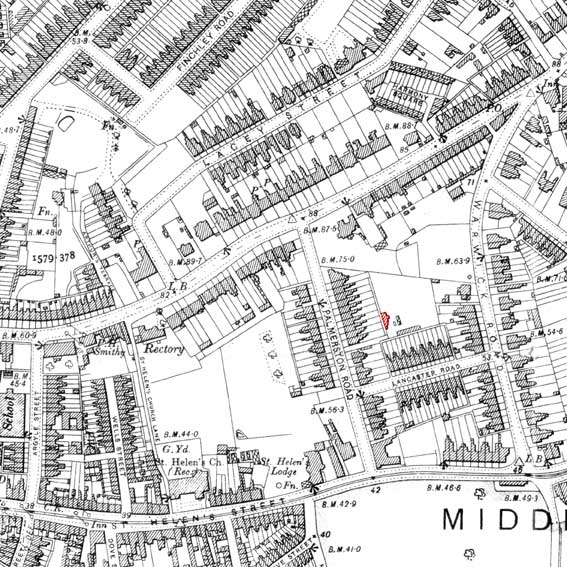 1902 map
The above 1902 map shows Home Cottage in red, tucked in behind the back gardens of the terraced houses on the east of Palmerston Road. Upton Place has yet to be cut through from Warwick Road. There are no houses on the south side of St Helens Street below the Palmerston Road junction, but the tramway is shown down the middle of the street with the double loop at the Warwick Road/Grove Lane junction. St Helen's Lodge is a few yards down towards the town and still stands today, but not in the large garden shown: that is the site of Jefferies Road (see our Street furniture page for the 'British Relay' box).

The parish church: 'St Helen's Ch. (Rec.)' and graveyard are there, but in 1902 the Rectory serving the church stands at the top of St Helen's Church Lane. This building was demolished to make way for St Helen's Primary School, built by V.A. Marriott and designed by R.C. Wrinch in 1913-14. So where did the Rector live after that? Is it possible that he moved to the house with the lettering 'Vicarage' further up Woodbridge Road, close to St John's Lodge? Are Rector's allowed to live in a Vicarage? Note the updates on our Vicarage, Woodbridge Road page for the answer. And the Church of St Helen (& its lost Rectory) now has its own page.
To the west again we see the dense housing of Wells Close, which would have been on the north-east corner of the Potteries (see our Courts & yards page), all demolished in the 1950s to form the Wells Close flats. To the north of Wells Street is the land behind the Horse & Groom public house which fittingly has a 'Smithy' behind it, hence the name. And on the corner of Woodbridge Road and Argyle Street Atlas House is clearly shown, which has an interesting and perhaps surprising history.