The original road bridges carrying traffic accross the Great Eastern Railway's Ipswich - Westerfield - Felixstowe line, the latter part built by Colonel Tomline (after whom a road between Foxhall Road and Derby Road in the Rosehill area is named) are numbered consecutively. This line opened in 1877 with its wondrously lofty viaduct where the line suddenly leaves the cuttings (as shown in some of the photographs), leaps the deep valley of Spring Road and plunges back into a cutting leading to the Wellesley Road bridge. Quite why every bridge has been carefully numbered in white stencilled figures against a black panel is of interest. Presumably gangers arriving to access the trackside were directed to the nearest numbered bridge to avoid confusion [see updates below]. 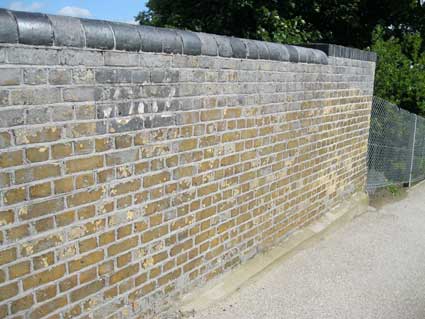 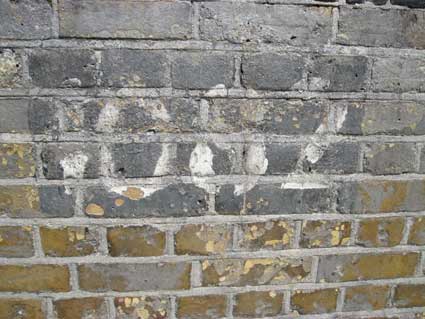 2012 images
(a) The first bridge after Westerfield junction: Tuddenham Road.
Incidentally, for information on the light railway which ran from Westerfield Junction down into the Grove and Dales brickyards, see our Brickworks and Ipswich's forgotten railway pages.

[UPDATE 12.10.2012: "In your web site article about railway bridges – you are correct in your assumption. All railway bridges are numbered as part of the method of location identification. However, where your information goes wrong is that this information was used by ALL railway staff whose duties involved use of that bridge. Also, signallers would use such information to advise Drivers of a location to which a caution was to be observed. I can remember the many drivers who all knew of tales about bridge numbering and peculiarities attached to a bridge. Those Train Drivers would often know the name of the road, farm or property with which the bridge was attached. Bridge numbers were numbered according to the line they were on – so those going to Felixstowe would have used a different sequence to those used on the London- Norwich line. Hope this helps, Andrew Brown (worked on the Footplate for the better part of 30 years)". Many thanks to Andrew for the authoritative clarification.]
[UPDATE 29.10.2012: "Hi Borin, Just picked up your very interesting web site from Ipswich Society article.  You’re quite right, all railway structures are given an identification number.  On the London to Norwich line the numbering starts at Liverpool Street station;  the distance from this source is also often denoted in miles and chains! By this means, accurate location of any part of the railway system can be described, but I expect you may have heard this already.  Keep up the good work. Best wishes, Tony Hill"] 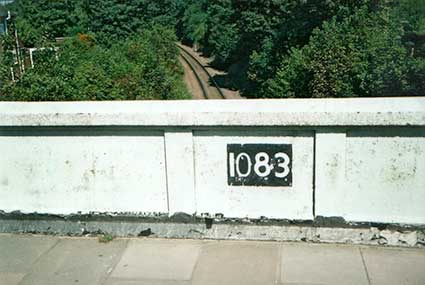 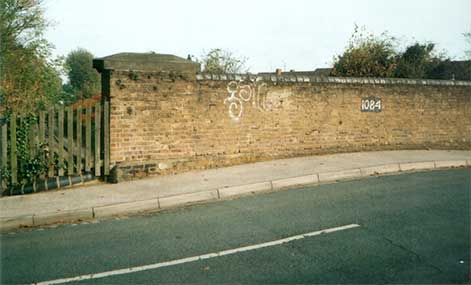 The picture (b) is taken from Colchester Road, close to the end of Cemetery Lane (risking very heavy traffic!), the white-paint of the concrete bridge carefully avoiding the black panel and number.
(d) 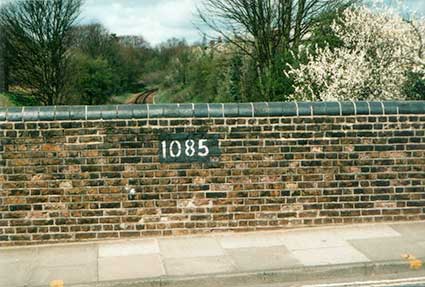 Number 1084 (c) is the bridge in Belvedere Road just before it goes through the old cemeteries. Most numbers seem to be painted on the wall of the bridge on the Westerfield Junction side  of the line. (d) is a picture of the Woodbridge Road bridge which lies close to the end of Belle Vue Road.

The bridge at Wellesley Road (not shown) leading into Marlborough Road near Clifford Road School has been rebuilt and does not bear a number.
(g) 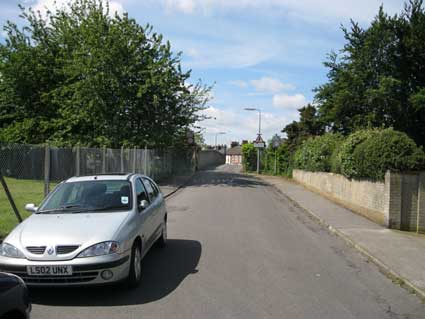 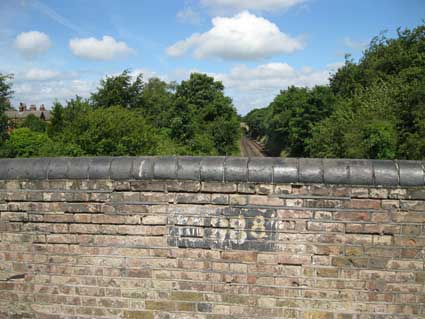 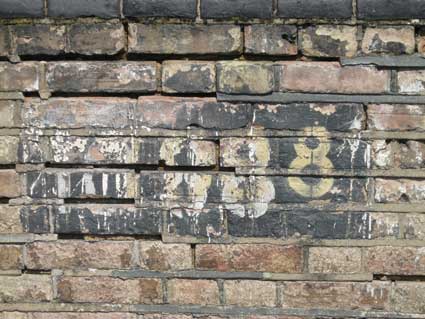 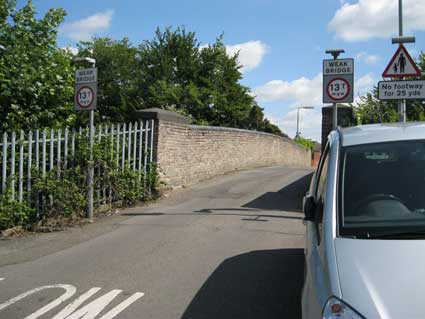 ... then from the Foxhall Road end. 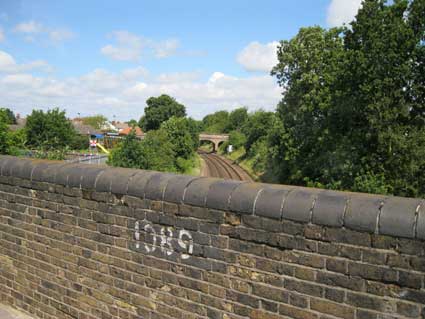 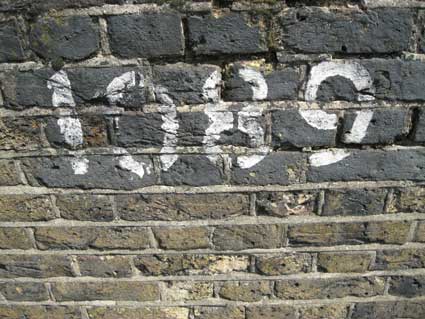 (h) is the Foxhall Road bridge with the Fuchsia Lane bridge in the background. 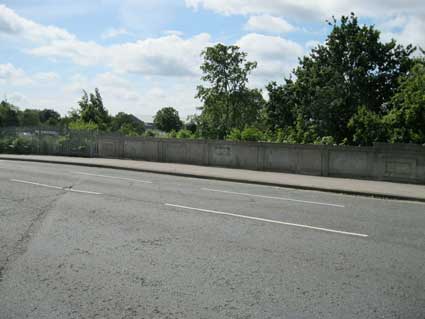 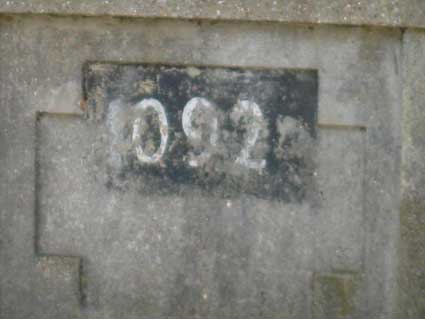 (j) is the concrete bridge carrying Felixstowe Road over the line, close to the St Augustine's roundabout. 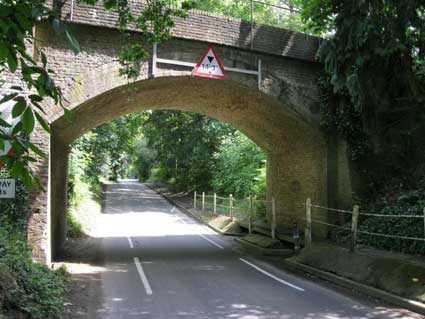 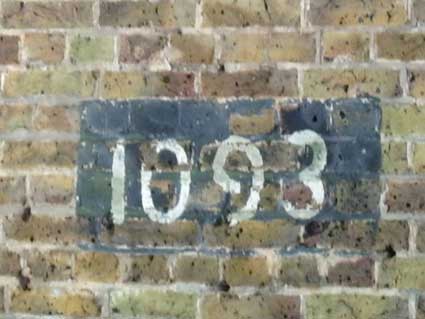 (k) Just to prove our dedication to the task, this one carries the railway over the lane down to Nacton village from the old Felixstowe Road – and yes, it's numbered.

The bridge in Derby Road next to the station was rebuilt to a higher specification to enable larger container trains through (similarly, the Stoke Bridge tunnel had its trackbed lowered in 2004), so the number has been lost. The building of the tunnel by Peter Bruff for the Eastern Union Railway, whose line originally terminated at the site of the original station and marshalling yard near Station Street, Croft Street and Little Station Street (off Wherstead Road) opened up the routes to Stowmarket, Bury St Edmunds, Peterborough, Norwich, Lowestoft and Felixstowe. The line to Felixstowe transformed the small fishing village on the North Sea coast at the mouth of the Orwell and Stour rivers (population from the 1861 census: 673 persons) into a successful seaside resort and later into a major port which today threatens to swallow up ever greater stretches of the natural riverbanks towards Trimley.

Colonel George Tomline, a Suffolk landowner who lived at Orwell Park on the edge of Nacton village (now a public school), promoted the Felixstowe Railway and Pier Company in a parliamentary Bill of July 1875. (see also Street name derivations for Tomline Road.) With impressive speed the line was built and the first train ran on 1 May 1877. A further Act of Parliament in July 1879 enabled the building of a dock, approach channels and additional railway lines to the dock area.

Once the new Ipswich Station was established at its present site in Ranelagh Road/Burrell Road the engineers had to navigate a route around the majority of a large, well established town to reach Felixstowe. Striking out westward (in the opposite direction to Felixstowe), the line travels out in a wide curve which continues past the main junction to Norwich, between London Road/Crane Hill and Hadleigh Road (close to sites of mileposts), then over Bramford Road and Norwich Road (site of the famous Ferodo sign!). Then under Dale Hall Lane and Henley Road. Leaving the edges of Castle Hill the line is now heading north-east towards Lowestoft until it reaches the level crossing at Westerfield. The original station building - now a residence - is tucked away behind the present station. Westerfield junction, several miles outside the Ipswich, is the chance for the line to leave the Lowestoft branch to whiplash back towards north and east Ipswich (apparently Ipswich Corporation forbade Colonel Tomline from building a railway through any central part of the busy town). The bridges are listed in sequence below with the confirmed numbers:-
(a) Tuddenham Road; 1082
(b) Colchester Road: 1083
(c) Belvedere Road: 1084
(d) Woodbridge Road: 1085
(e) Spring Road viaduct (1086)
(f) Wellesley Road: refurbished; no number visible (1087)
(g) Fuchsia Lane: 1088
(h) Foxhall Road: 1089
(i) Derby Road (replacement structure - presumably 1090); 1091 missing: a mystery [Note: at this point the line is only one and three-eighths of a mile from the London to Norwich line as it passes the old Stoke sidings (now housing); click to view a map of Ipswich from c.1930 which shows the pattern of Ipswich railways (and more).]
(j) Felixstowe Road: 1092
Modern bridges over recently cut-through roads: Ransomes Way (near Warren Heath Sainsbury) and A14 (both unnumbered). The line for a considerable distance from St Augustine's runs parallel and close to the road.
(k) Rail bridge over lane down to Nacton village from the old Felixstowe Road: 1093 [This was the site of the Orwell Station; in fact, the Station Master's house still stands close to the bridge.]
From there it is finally on its West-sou'-west course to Trimley and Felixstowe. What a curious journey it is.

[UPDATE 1.3.2017: see our page on the Ipswich-Westerfield-Felixstowe Branch Line, with excellent period photographs of all the stations by Richard Casserley and his father, Henry.]
Reading: Cobb, S.: Ipswich to Felixstowe: 125 years on the line (see Reading list).


[UPDATE 28.6.2012: "Excellent photos, Borin! Actually, I spent a good half hour (and counting), just looking at other parts of your web site last last week. Really interesting! I had always wondered who Bishops Hill was named after (and actually contacted the council a few years ago - they did not know).
It is rumoured that Tomline - who hated the Cobbold family - built the Felixstowe Stations so that they were sited well away from the Ordnance Hotel owned by John C Cobbold!
Were there no numbered bridges after Nacton - or does your remit not stretch further than that?? From Tina Hammond" We ran out of steam near Amberfield School, but are sure that the numbers continue.] 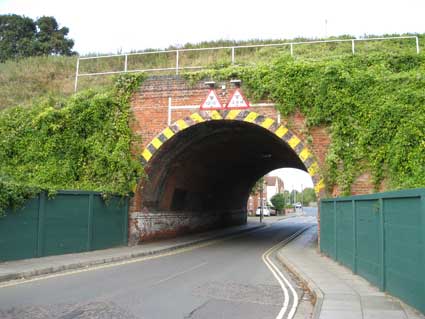 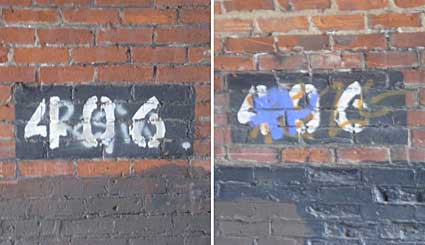 2014 images
The Ipswich to Lowestoft and Felixstowe line (splitting at Westerfield Junction) crosses Bramford Lane at the 'nipped in' arched bridge which has its number '406' stencilled on each side of the interior. Meanwhile its near neighbour in Bramford Road has '405' clearly marked on the northern inner wall. 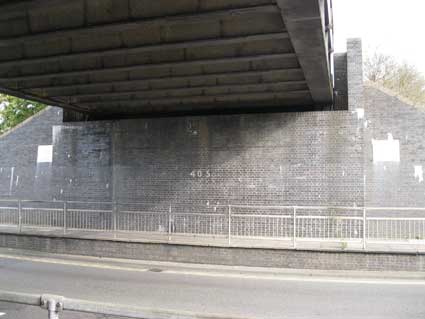 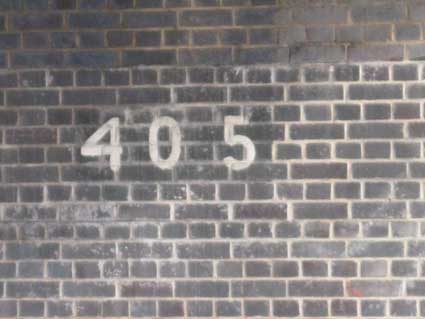 Bridge No. 248: we believe that the dip in the road here was to accommodate the clearance required by tramcars, which were introduced after the rail line was constructed. This bridge features a passenger underpass to the right. The steel bridge carrying the Griffin Wharf branch over Wherstead Road is apparently unnumbered. However, on examination of the white signs on each side, we find that it is numbered '248' – which doesn't exactly fit in with 244 and 243 further south.

'IF YOU WITNESS A VEHICLE STRIKING
THIS RAILWAY BRIDGE
PLEASE CONTACT RAILTRACK* USING
Telephone No. 0207 2471292
AND STATE 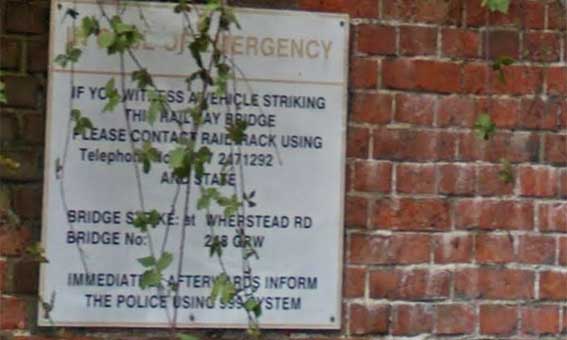 *Footnote: Railtrack was a group of companies which owned the track, signalling, tunnels, bridges, level crossings and all but a handful of the stations of the British railway system from 1994 until 2002. It was created as part of the privatisation of British Rail under Prime Minister John Major. In 2002, after experiencing major financial difficulty, most of Railtrack's operations were transferred to the state-controlled non-profit company Network Rail. 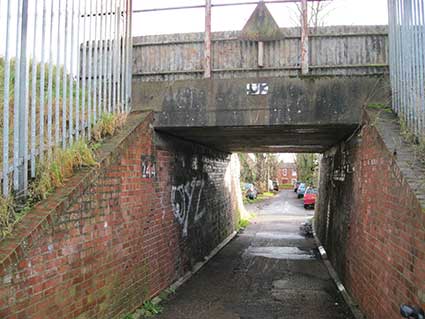 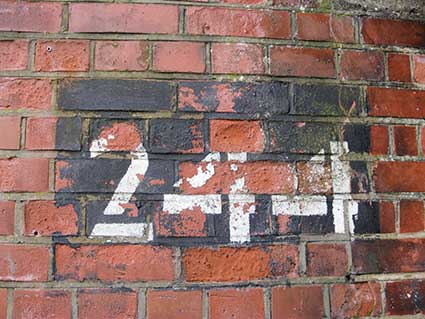 2016 images
Bridge No. 244. A narrow asphalt path runs away from the main road (directly opposite no. 501 Wherstead Road – with the red front door at the centre of the above left photograph). It passes one or two dwellings, then slots underneath the main railway line to meet a couple of undistinguished footpaths. It's such a modest bridge, it really looks like the sort of crossing you would see on a single-track branch line. Stand beside it for a while and you know different.

Eastern Counties signals & regulations book 1846 ; this link takes you to a weg-page for a download of all the pages in the 1846 railway booklet.