Bridge Street today is barely noticeable: the stretches of dual carriageway (and intermediate roundabout serving College Street and Grafton Way) running from the roundabout in front of St Peter's Church and the Novotel, across the bridges up to the beginning of Vernon Street and Stoke Street. Interestingly, it also includes the little slip road from the corner by the neglected No. 4 College Street down to Stoke Bridge approach and the St Peter's Wharf road to 'the island' site.

Photograph courtesy The Ipswich Society
The photograph from the early-mid 1980s shown above from the Ipswich Society's Image Archive (see Links) shows a little seen view of the corner of Bridge Street and College Street. 'Little seen' because, we deduce, the photographer was standing on the grassy bank of the traffic island which separates the Bridge Street slip road from the Grafton Way roundabout. The side and rear of 4 College Street are on the left, 1-5 College Street (the old Burton Son & Sanders offices) are central, next is St Mary-At-Quay church tower and the cream-coloured Burton factory block (which has now been converted into the residential Cardinal Lofts with extra storeys added in the 2000s) is on the right. The cast iron stereet nameplate is visible centre-left on the red brick wall.

The cast iron sign bearing the weathered patina of many years, with its superscript 'T' (similarly used in Northgate Street with an unusual superscript 'VE' in Lloyds Avenue) is shown below in situ on the curving red brick wall.

and below the street sign what we at first thought were fire insurance company medallions ('LVH, 18FT.' and 'LVS, 11FT.') [see May 2011 update below]: 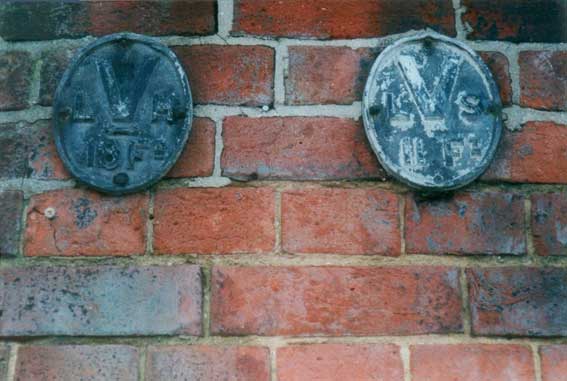 Perhaps inevitably, this lettering example was noticed to have disappeared by late 2005. Presumably this was all part of the radical Waterfront Regeneration scheme which was responsible for the removal of massive unsightly old concrete structures and their replacement with massive unsightly new concrete structures (cynics!). Or its disappearance might have been due to metal thieves... 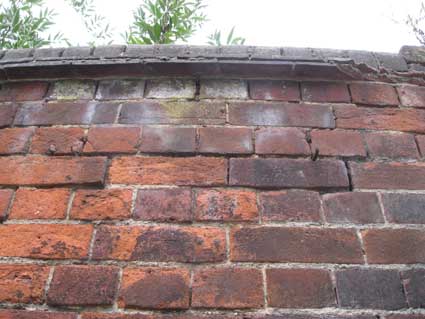 2014 images
These 2014 images of the curving wall, still undoubtedly Bridge Street – why did they remove the street nameplate? – show the site of the sign. Above right: the rusted remnants of the lower brackets still project from the brickwork. In the left photograph, the gable of 4 College Street can be seen, so this wall occupies part of the space where number 2 College Street must have stood. See our College Street page for an 1890s view.

[UPDATE August, 2010: The old, burnt-out St Peter's Maltings behind this sign has now been demolished.]
[UPDATE May 2011: '... the metal plates with a V in them are not fire marks or fire plates; they indicate the position of valves on the water mains and are of late nineteenth or twentieth century date. The fire marks issued by insurance companies were much earlier, and were generally more ornate.' We're grateful for this correction by Bob Malster (See Reading List). Indeed there are some fine examples of the fire plates on the building frontages opposite the Ancient House and elsewhere in Buttermarket.]

Other water valve markers can bee seen collected at 170 Foxhall Road (see our Rosehill house names page), in the yard of the Sun Inn and at Ivry Street (see our Street furniture page).

Scroll down for a 2021 street sign on the south section of Bridge Street.

1778 map
On the 1778 Joseph Pennington map detail, St Peters Street comes down from the north past the church; at the junction with College Street it becomes Bridge Street. Passing the tidal mill lagoon labelled 'Stoke Mill' it crosses the Orwell to approach the staggered crossroads at The Old Bell. It is difficult to imagine these closely-built roads in today's open street scene with the skate park on the site of Stoke Mill, the reshaped St Peters Wharf and lagoon, Novotel roundabout and Cardinal Park. 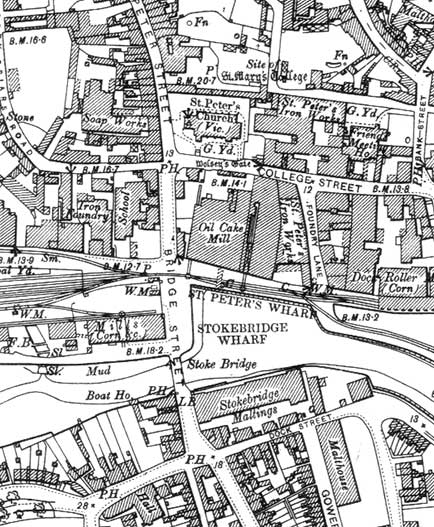 1902 map
By the 1902 map we can see that the tide mill to the west of the bridge has gone and tide pool filled in, to be occupied by 'Mills (Corn &c.)' served by the dock tramway. In the twenty-first century this area is occupied by the skate park. The pool of St Peters Dock is narrower, but Bridge Street is still shown as running from the Church of St Peter/College Street south to the junction with Dock Street. 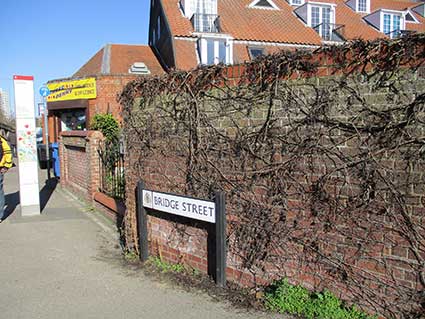 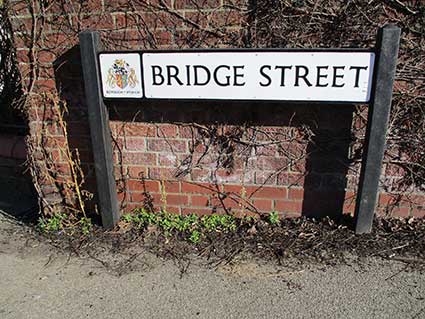 2021 images
The above photographs show a modern street sign configuration using plastic uprights and horizontal onto which the dtreet nameplate is fixed. The additional lozenge to the left carries a colour depiction of the Borough coat of arms with 'BOROUGH of IPSWICH' beneath it in sans serif capitals, the 'of' in tasteful italics. The street name capitals carry serifs with a maked 'kick', easily seen in the top bar of the 'T'. Stylish, but clearly read by passers-by, one hopes that the sun won't bleach this sign – particularly the coat of arms which often appears as a blank square frame in longer standing examples. The convenience shop in the photograph (above left) was built onto the end of Stoke Bridge Maltings; at extreme left, the curving part of Stoke Bridge can be seen.

Historical significance
The importance of Bridge Street is indicated in Keith Wade's paper: A history of archaeology in Ipswich and of its Anglo-Saxon origins (see 'Special subject areas' on our Links page.):-
'At this [Middle Saxon] period, there was also much activity along the north bank of the River Orwell. A long sequence of timber waterfront revetments, from the 7th century onwards, were found in excavations at Bridge Street in 1981. The Middle Saxon waterfronts, of simple post and wattle hurdle construction, were little more than a bank protection, providing dry land on which to embark from the shallow draft boats of the period, such as that found at Utrecht. More complex timber structures were found more recently during excavations at the Cranfields Mill site, east of Bridge Street. '

The Grand Ipswich timeline gives much more information about the origins of Ipswich.