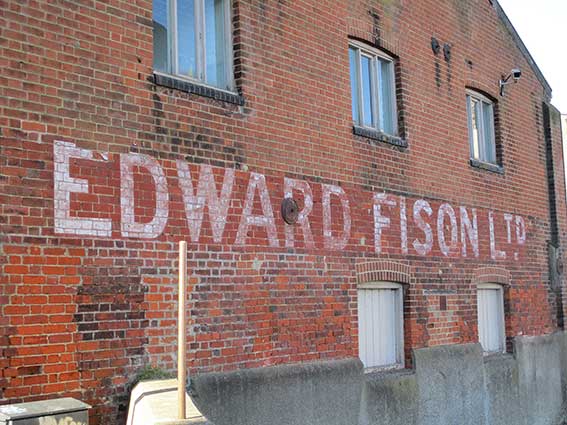 Above: the Edward Fison lettering photographed during the third pandemic lockdown in February 2021 – the first time we've taken it from Dock Street – shows that weathering over the past twenty years has strengthened the characters.

Edward Fison Ltd warehouse
Close to the upper reaches of the Wet Dock, what we at first thought was 'Howard Elton Ltd.' appears faintly through the brick-red paint in the year 2000. It is notable how weathering increased readability over the next nineteen years (as seen in the later photographs, below), when the whole building was at risk of demolition. 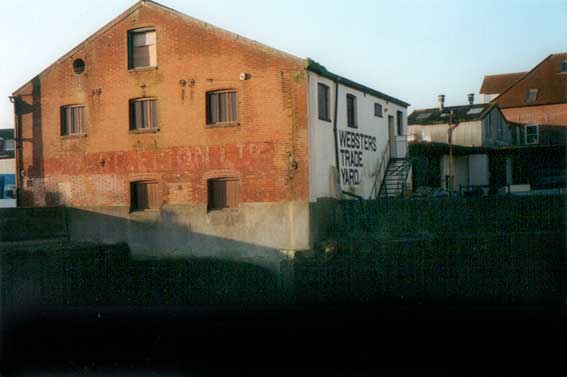 2000 images
'WEBSTERS
TRADE
YARD.'
stands out against the whitewash of the side wall. 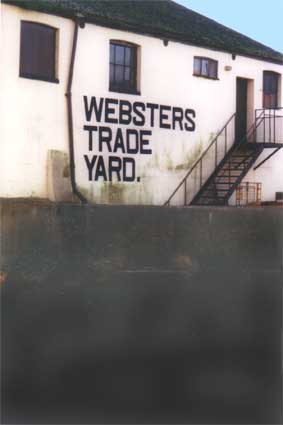 However, an anonymous email suggests that this is likely to be a more familiar trade name. "Couldn't it be 'Edward Fison Ltd'?" Thanks for the feedback. The 2012 image shows that the weathering of this wall has made the lettering much clearer:

Gipping House on Dock Street which was, in the early 2000s, the pinkwashed warehouse and offices for a yacht and shipwright company, dates from the late 18th or early 19th century. In its early years it was used as an infantry barracks (as was the nearby Stoke Maltings, see below), but became, in 1849, one of many buildings in the town to be converted into maltings. The lettering on the brickwork at the east end of the premises suggests that, as a maltings, it was owned and operated by Edward Fison Ltd: one of the first British companies to produce malt extract for brewers and bakers. 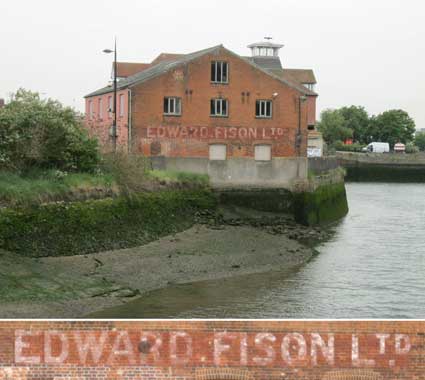 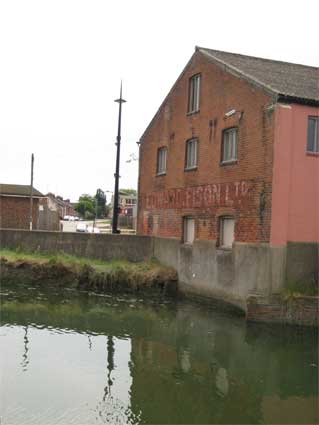 2016 image
Great Whip Street in the background reminds us that this is the line of a very ancient southern route into Anglo-Saxon Ipswich before Stoke Bridge existed. The site of the Edward Fison Ltd. sign is at the presumed point where Great Whip Street became a ford across the River Orwell, leaving the water around the line of today's Foundry Lane. The natural dock was much broader, marshier and the water shallower in the 6th and 7th centuries. The route north into town was probably via the line of Turret Lane, St Stephens Lane and Dial Lane. The 2016 version of the same view shows the Genesis residential complex on Stoke Quay.
[UPDATE 19.9.2014: Dock Street and Stoke Quay have been in upheaval since 2013 with the building of a series of tower blocks (see our Felaw Street for a early view of the site from Bulstrode Road), so here are a couple of shots of the Dock Street street nameplate at the junction with Vernon Street –opposite The Old Bell – with that new development in the background.] 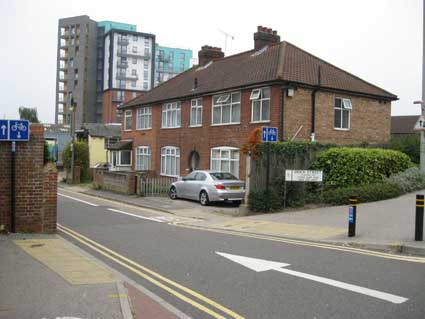 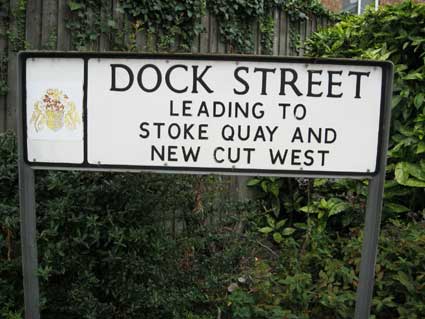 Below left: the position of the warehouse on New Cut with Stoke Bridge in the background and immediately to the right, Stoke Bridge Maltings which is now flats and former home to the 'Underground' sign (see below). Below right: The view from the narrow isthmus leading to The Island showing, to the left of the sign, the line of Dock Street. 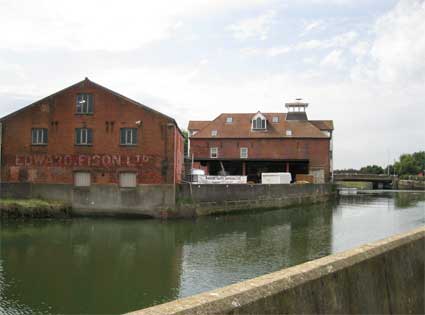 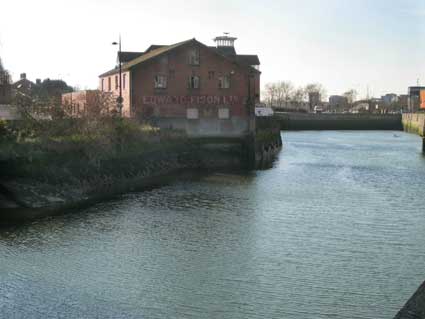 At threat
The Ipswich Society's Mike Cook writes:
'APRIL 2019. Webster’s Yard, Dock Street. (Conservation Area + IP1 Action Area).  Complete site clearance and erection of a ten storey building containing seven 2-bedroom apartments, a 3-bedroom duplex and a town house.  The exterior design appears satisfactory. It would be smaller in height and bulk to the neighbouring development. There has been preapp (pre-application) discussion to which we have not been party and the proposal is now well advanced. It is a small but luxurious development. It will mean the loss of the ‘Edward Fison Ltd.’ sign. This historic lettering feature has no mention in any list: Historic England, Pevsner, nor the Society's 1984 Local List. It is, however, in the Stoke conservation area. It is difficult to make a case for it architecturally but it would be interesting to try and retain the gable wall with the Edward Fison sign or, at least, some memory of it in a new build.'
FEBRUARY 2021. A fresh planning application in 2021: this one is for a three storey luxury house which promises to retain the sign to the east. 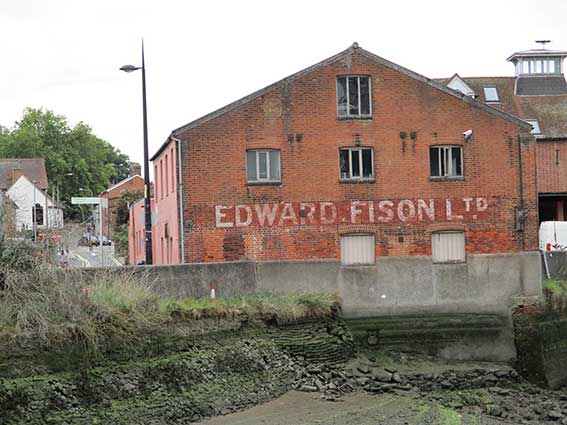 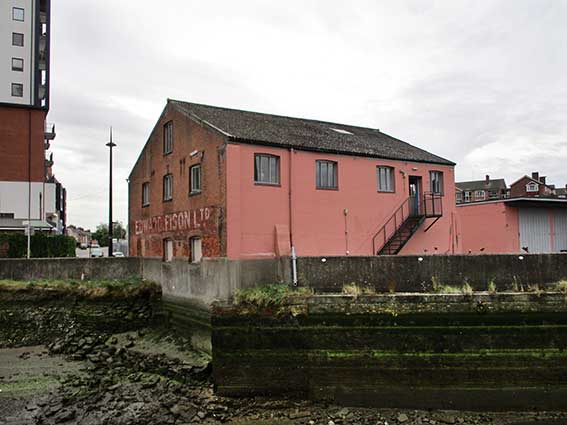 2019 images
Above: commemorative photographs in September 2019. If this building is destroyed – with its lettering, quirky history and lack of Listing – we thought that we would include images taken nearly twenty years after the first ones on this page. Beneficial neglect has resulted in the brick-coloured paint, which was intended to obliterate the sign, washing away steadily to reveal 'EDWARD FISON LTD.' very clearly. The left image shows the view up Dock Street with, across into Stoke Street, the side wall of The Old Bell (now Gwinnell's Funeral Directors) and behind it the People's Hall roof. The trees in the distance mark the site of the carriage drive up to the original Stoke Hall mansion past St Mary-At-Stoke Church. The right image shows the view across the Orwell, past the Fison building and along Great Whip Street. Our Felaw Street page has period maps which clearly show, particularly on the 1610 Speed map,  the end of Great Whip Street descending into the river as it became a ford over the River Orwell. These low-tide photographs of the Victorian New Cut show how the river banks were built. All around the Wet Dock the quayside revetments to enable shipping to dock were established in the marshland over centuries and gradually narrowed-in with the marshes drained in this area.

See the 2021 photograph taken from Dock Street at the top of the page.

Bolenda Engineering
A view across New Cut showing the bottom of Great Whip Street and the somewhat unattractive: 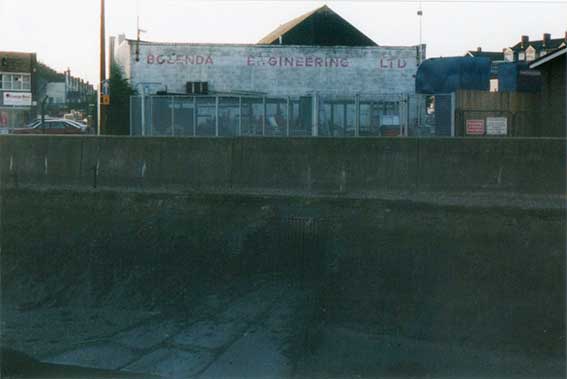 2000 image
The indispensable Suffolk CAMRA site (see Links) tells us that, somewhat suprisingly:
'Originally only licensed as a beerhouse, the Ipswich licensing records show that the Britannia Inn got its full license on March 28th, 1960. After closure it was used for many years by Bolenda Engineering. The building was demolished late in 2011.' By the look of things, there wasn't that much left of the original Britannia Inn by the date of its demolition. Interestingly, the internet searches still show the company as active in 2019, some entries carrying the 7 Great Whip Street address.

Stoke Bridge Maltings and the unlikely 'UNDERGROUND' sign
Not far from the 'Edward Fison Ltd' building shown at the top, is the converted wharf facing Burtons across the Stoke Bridge lagoon and the narrowing top end of the Wet Dock (on the Stoke side). This attractive rake of buildings was modernised as dwellings and offices in1988 long before the later upheavals of the Wet Dock regeneration. 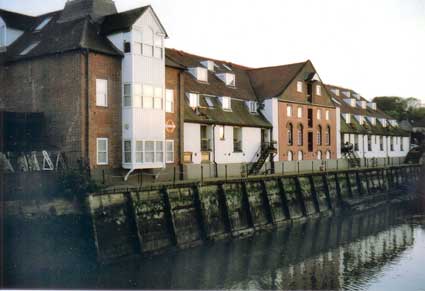 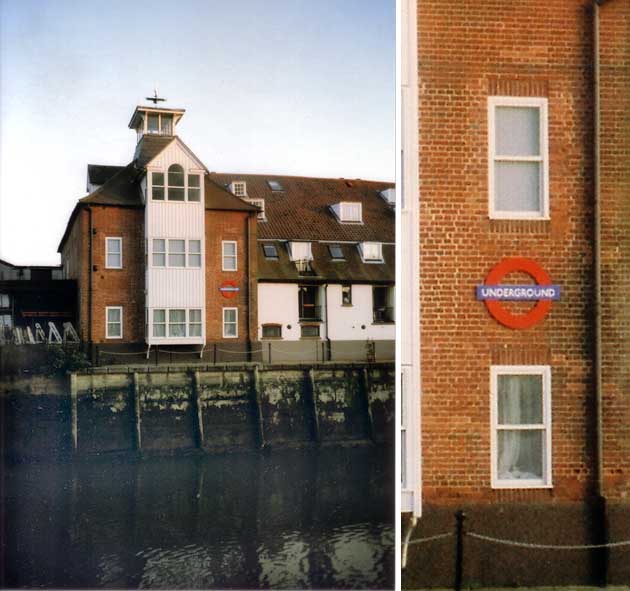 The famous London Underground logo of red circle and blue bar with white Gill Sans caps is a screw-on sign, so doesn't really fit into our parameters laid out on the Introduction page, but it is so incongruous that it had to be included here. Perhaps there's a secret tube platform deep down below the bottom of the Wet Dock basin with a direct electrified line to the Cabinet Rooms below 10 Downing Street and a side branch to the nuclear bunker near Mistley. Actually, it used to be the site of a computerised control system for London Underground, though why it was sited in a converted wharf in Ipswich docks is anyone's guess. Apparently, Stoke Bridge Maltings was built at the end of the 1700s on the site of an old mill. This maltings was converted into an infirmary barracks in the times of the Napoleonic Wars until it was sold by the government in 1813 and reverted to its original purpose by 1849. This was one of several barracks established in Ipswich to hold troops and militia in preparation to repel a possible French invasion (behind Albion Mills on Woodbridge Road, near Barrack Corner on Norwich Road – see Suffolk Militia Depot). Falling into decay, Stoke Bridge Maltings was restored and used as a distribution warehouse by a building componenets firm and renamed 'Gipping House' in 1969. The Grade II Listed building was later converted into 41 flats in 1988. 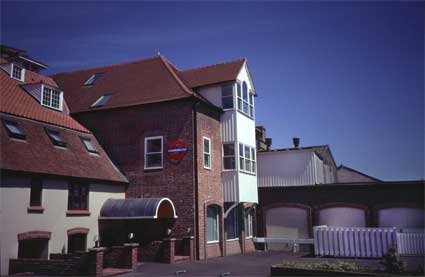 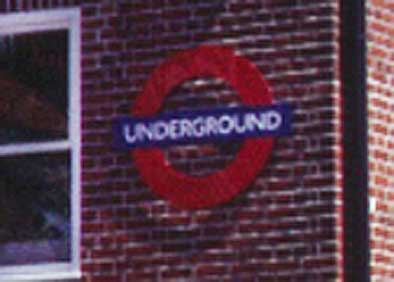 The above left image from The Ipswich Society's Flickr collection (see Links) shows the Dock Street entrance to Stoke Bridge Maltings in the 1990s, with a second 'UNDERGROUND' sign above the porch (close-up above right).

[UPDATE Spring 2012:  the 'Webster's Trade Yard', 'Bolenda' lettering, also the 'Underground' sign, had all disappeared by the time of the 2012 pictures.]

UPDATE 12.2.2013: We are grateful to The Ipswich Society for this period (1950s/60s?) photograph of the Stoke Bridge Maltings with its lettering: 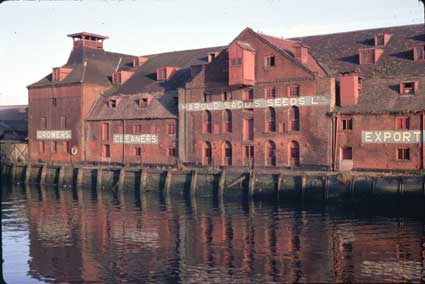 This compares with a modern aerial view of the converted maltings:

E. E. White's Map of c.1867 clearly shows 'Malting' at top right of the detail shown on our Stoke Hall page. To the east, Dock Lane led in the 17th Century to the Keys Cooperage; in the mid 18th Century to extensive orchards and a shipyard on the south bank of the river basin; and in the 19th Century to The New Cut and to large maltings (now demolished). In the late 18th Century, the long low warehouse of 4 storeys – three of which were within a deep pantiled roof – was built adjacent to Stoke Bridge. This was used as an infirmary barracks in 1803, converted to a maltings in 1849 and converted again to residential use in 1988.

Incidentally, Stoke Bridge (or in modern times, more correctly 'bridges': there are two side-by-side) stands only yards away from one end of these maltings, historically taking Bridge Street over the river to run up the narrow Bell Lane. Today it links with the reshaped Vernon Street (site of the town's first Co-op) on the Over Stoke/Wherstead side. It is worth noting that this is the latest in a long line of river crossings on, or near, this spot. It's fairly clear that a ford nearby (the banks at this part of the river being much shallower) was used for animals and heavy vehicles in at least the tenth century. This linked the old Saxon roads later named Lower Brook Street in the town and Great Whip Street in Stoke. The ford existed alongside the bridge probably until the late 15th century. For more on the origins of Ipswich at this site see our Historic maps page.

For a 2007 aerial view of the Stoke Bridge area, click here.