"The Anglo-Saxon settlers were already active here by A.D. 625 – we know this by the dating of pottery shards found in the ground – and the ford across the river [near today's Stoke Bridge] was the vital river crossing which was the foundation of Ipswich. It took the settlers 300 years to build a bridge across the river." John Norman, Chair of the Ipswich Society

The tablet on the north side of the bridge: 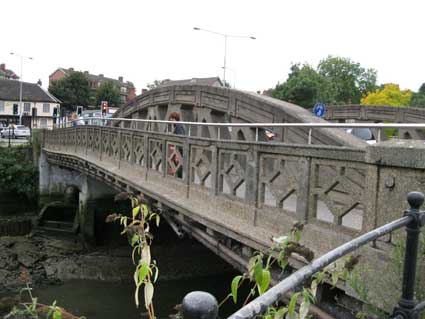 The tablet on the south side of the bridge, not noticed by many people as it is sited between two very busy roads and pedestrians rarely go there: 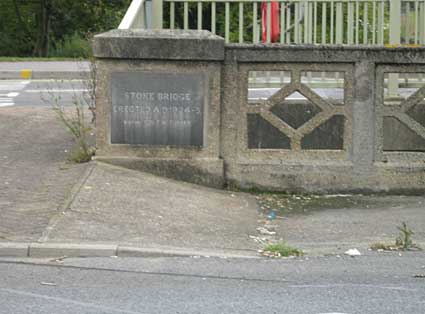 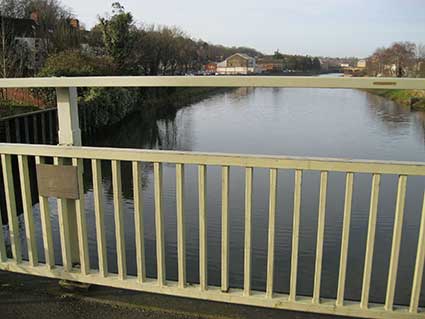 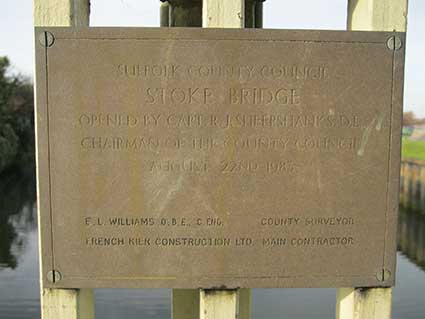 Only noticed in January, 2016 here's another plaque attached to the western parapet of the 'new' bridge with the Orwell stretching up towards the Princes Street bridge:

See our Stoke Hall page for early maps of this area. On Pennington's map of 1778 one can see St Peters Street leading past the church into Bridge Street which descends southwards from the town centre, past Stoke Mill (the tide mill with mill pond to the west), over Stoke Bridge, crossing the junction of Stoke Lane and Dock Lane with The Old Bell marked 'Bell'. Vernon Street and, of course, the locked Wet Dock and New Cut would not exist until the next century. Scroll down for a modern aerial view.
The importance of Stoke Bridge
Just as the Romans had colonised Iceni settlements, so the Anglo-Saxons moved onto land abandoned by the Romans and built a number of small hamlets along the Gipping and Orwell rivers. Ipswich, or Gipeswic as it became known, was one of the first of any size to be founded and one of the first to be populated. The place between Ipswich and the hamlet of Stoke was the shallowest part of the river and the most easily forded or, about six hundred years later, bridged. This first possible crossing point moving upstream from the mouth of the river (that is, until the Orwell Bridge was built in the 20th century) was the nucleus of the continuous settlement in that precise location. This ford across marshy ground would have been close to the present day Stoke Bridge and is said to be on a line between today's Foundation Street on the north side – others would argue in favour of Foundry Lane – and Great Whip Street on the south; these streets still line up on a modern street map despite more recent additions such as the Wet Dock and New Cut. This nucleus is what gives Ipswich its claim to being the oldest continously settled town in England.

There have been  number of Stoke Bridges. There are records of a bridge existing on the site from the late 13th Century. The fact that the Domesday Book mentions the church of St Mary-at-Stoke implies that a crossing existed much earlier. An iron bridge engineered by Ransomes was built in 1819, replacing an earlier stone bridge which was swept away in floods. In 1923 there was a fire at Burton, Son and Saunders in Key Street that was so fierce the heat buckled the steelwork of Stoke Bridge which was demolished. It was replaced – as we show above – by the present concrete southbound bridge which has a plaque celebrating the bridge's erection over 1924 and 1925. A second bridge to carry northbound traffic was added in the 1982 (shown under construction on our Trinity House buoy page). The bridge was for centuries the southernmost crossing of the river in Ipswich until the construction of the Orwell Bridge in December 1982. 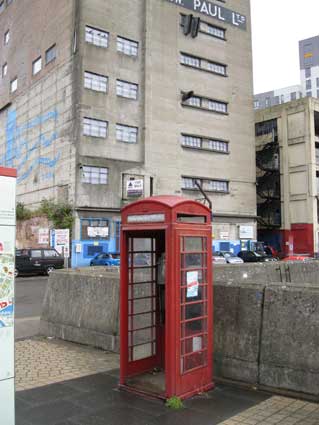 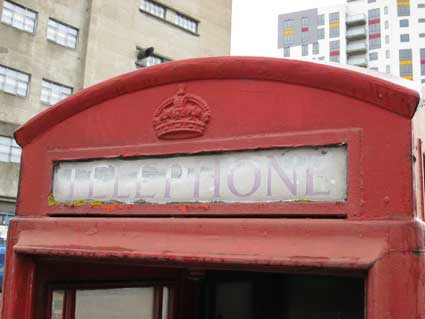 The name was coined in 1835, "apparatus for signaling by musical notes" (devised by Sudré in 1828), from French téléphone (c.1830), from the Greek télé- "afar" + phone "voice/sound". Also used of other apparatus in the early 19th century, including "instrument similar to a foghorn for signalling from ship to ship" (1844). The electrical communication tool was first described in modern form by P. Reis (1861); developed by Alexander Graham Bell, and so called by him from 1876. 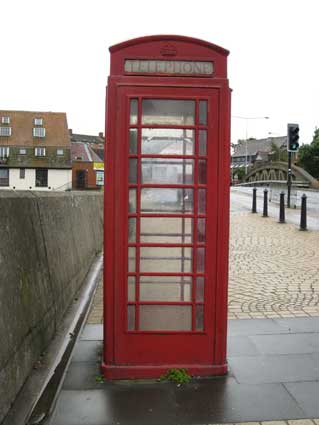 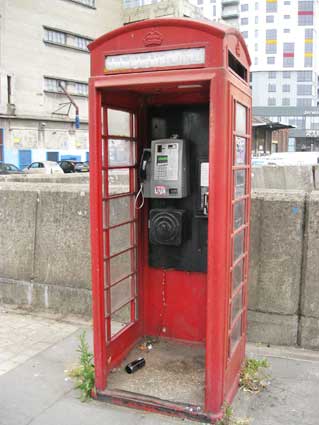 2014: phone replaced, but not door...
The K6 kiosk is identified as Britain's red Telephone Box; in fact eight kiosk types were introduced by the General Post Office between 1926 and 1983. The K6 was designed by the great architect, Sir Giles Gilbert Scott (1880-1960, designer of Battersea and Bankside power stations and Liverpool cathedral), to commemorate the Silver Jubilee of the coronation of King George V in 1935. Some 60,000 examples were installed across Britain, which is why the K6 has come to represent the red Telephone Box. Over 11,000 K6s remain and they are the most visible examples of the eight kiosk types. See our Trinity House buoy page for 1980s photographs of this K6 in front of the original redbrick Paul's maltings. More on telephone kiosks can be found on the Street furniture page.

Sadly, this hardly-noticed 'phone box has seen much better days. The door is missing and so,  2013, was the actual 'phone receiver with the cable hanging forlornly; it was later replaced. Is this the sign of a town in decline? See a lost K6 example from outside The Greyhound pub on our Street furniture page and the only K6 with door and a working telephone (we think) outside County Hall.

A few yards past the K6 is the Trinity House buoy. On the Stoke side is Stoke Bridge Maltings, The Old Bell and The People's Hall.

'St. Peters Dock'
The lagoon between St Peter's Wharf and Stoke Bridge Maltings provides the extra depth for the 'Viewing platform' to provide views of the Wet Dock and quays (see the update below). Across the road the modern Skate Park stands on the site of the old tide mill. The line of the tramway curves horizontally across the image. One striking thing about the roads, roundabouts and Stoke Bridges is the amount of public lettering painted in white on the tarmac surfaces. Not 'historical' perhaps, but there's a lot of it.
[UPDATE 20.6.2018: it is only recently that we learn that the correct term for the 'lagoon' to the east of Stoke Bridge is correctly called 'St Peters Dock' in that it is a separate dock outside the Wet Dock, accessed only from New Cut, so is still tidal. This is confirmed by the street nameplate fixed to the flood wall close to the K6 telephone box.] 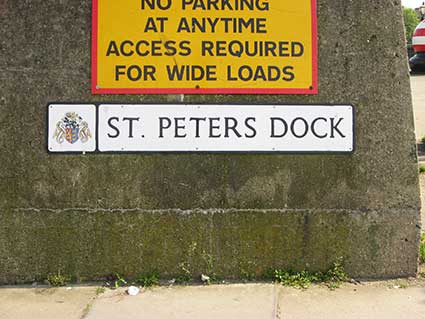 The street nameplate with Stoke Maltings the 'Edward Fison Ltd' buildings, both accessed from Dock Street, and the Genesis development on Great Whip Street in the background.

[UPDATE 12.4.2020: We learn from the Ipswich Maritime Trust (IMT, see Links) Newsletter August 2019:-
'The continuing saga of St. Peter's Dock and Wharf
Last year, at the invitation of Suffolk County Council, IMT offered ideas to embellish their proposed access enhancement scheme with suitable artefacts. At the same time we also (successfully) sought to persuade the local authority to change the name of the roadway to 'St. Peter's Wharf', which historically had been used up until the last half-century...'
Presumably, we can expect to see the street nameplate(s) on this road between Bridge Street and Foundry Lane changed to the new name. This may take a while.]